Week 1 of the NFL season has finally begun. And after an amazing start to the season with a classic TNF matchup, tomorrow we kick off the first full Sunday of action. The preseason battles, surprise cuts, free agent signings, coaching staff changes, off-season holdouts, and all of the news and noise are finally behind us. The NFL is now back in full swing.

Before tomorrow’s kickoff, let’s take a quick moment to glance at some of the great games slated for week 1. The TNF matchup between the Bucs and the Cowboys was merely a start to an amazing week 1. We have games with strong playoff and conference implications. Games between bitter division rivals. Some with a subplot of revenge. And others pitting the top second-year players versus each other. I give you, the NFL week 1.

Alright, before we go too crazy breaking down the rest of the week 1 slate, we first need to recap the thrilling TNF game that featured the defending champ Buccaneers versus the Cowboys, featuring the return of Dak. Let’s start there.

Dak Prescott was brilliant in his return to the football field. He was a little tentative early and didn’t really take any hits until the second half, but by the end of the game, he was back to where he left off last October. In his return, he threw for over 400 yards and 3 touchdowns. Two of those touchdown passes were thrown to Amari Cooper who had a monster game, hauling in 13 receptions for 139 yards. CeeDee Lamb added the other touchdown while hauling in 7 receptions for 104. The Cowboys and Dak are back.

With that said, the Buccaneers as a team were even more brilliant. Tom Brady had a huge night of his own, throwing for 380 yards and 4 touchdowns. And two of those scores were hauled in by none other than his favorite target of all time: Rob Gronkowski. With those two scores, they have now hooked up for 100 touchdowns in their career, good for third all-time. 14 of those scores have come in the playoffs, good for first all-time.

Gronk was not the only Bucs receiver hauling in touchdowns, Chris Godwin and Antonio Brown each added a score of their own. Godwin paced the Bucs in receptions, Brown in yards, and Gronk in touchdowns. The Bucs receivers all came to play on TNF.

On the defensive side of the football, Carlton Davis and Lavonte David shown very bright versus the Cowboys. Carlton Davis had 3 incredibly clutch defended passes and intercepted another, coming up with all sorts of plays versus the Dallas receivers. David had a huge defended pass which potentially saved a touchdown while leading the team with 11 combined tackles. Shaq Barrett registered the only sack of the game.

The Cowboys also had a few defensive standouts worth mentioning, too. This comes as no surprise, however, being that the team collectively turned over the Bucs 4 times. Jourdan Leis had 2 of those turnovers, one by interception and the other by fumble recover. In addition to this Lewis was around the ball on several key plays, including a defended pass. No Cowboy defender was more clutch on TNF than Trevon Diggs. He intercepted a pass when the Bucs were driving and came up with a huge defended pass versus Mike Evans to save a touchdown.

In the end, though, TNF football came down to neither the offense nor the defense. In the end, it was truly kicker versus kicker. Greg Zuerlein missed 2 field goals (one very poorly) and an extra point. Meanwhile, Ryan Succop lined up with 7 seconds left to play and booted a 36-yard field for the win. With that kick, the Bucs won TNF versus the Cowboys by a score of 31-29.

What a way to start off the season!

The NFL is calling this their Game of the Week for Week 1 and boy do they got that one right. The Browns versus the Chiefs has incredible significance to the AFC playoff race, as Cleveland boasts one of the most improved teams a year after playing in the divisional round of the playoffs. And the Chiefs are, you know, the Chiefs.

On the other side of the ball, RBs Nick Chubb and Kareem Hunt will do all they can to make sure that Mahomes is on the sideline as long as possible. Tyrann “The Honeybadger” Mathieu is back from the COVID reserve just in time to help L’Jarius Sneed and the Chiefs’ secondary versus the newly revitalized tandem of OBJ and Jarvis Landry. Meanwhile, Chris Jones has made the transition from inside to outside, in an attempt to put added pressure on Baker Mayfield.

Superstars collide in all phases of this week 1 classic.

Alright, this game does not feature nearly as many superstars or playoff implications as the Browns versus the Chiefs, but it wins in the department of storylines. The Jets debut their stud rookie QB Zach Wilson, who excelled in the preseason as the top rookie QB. The Jets would love to get off to a quick start and have him score his first touchdown early for multiple reasons. Besides the obvious, that it will help keep them in/win the game, they also wish to show off their young talent to a league and fan base that will be watching intently. They also want it because it will help to prove them right.

You see, the other quarterback in this game is Sam Darnold: the QB they most recently gave up on. And you know one thing is clear: Darnold wants to prove the Jets made a mistake in moving on from him. He would love nothing more than to go out there and throw a four-touchdown game. And you know who he would love to throw two of those touchdown passes to? Robby Anderson. The Jets gave up on Darnold’s favorite target, Anderson, a year earlier, allowing him to sign with Carolina.

This game is a battle of wills featuring an organization trying to move forward from dreadful past several seasons versus a quarterback and receiver they gave up on and the new team they have high hopes with.

Chase Young versus Rashwan Slater is a matchup I am looking forward to in particular. When the two squared off in college, Slater dominated Young, but Young now has a year of NFL experience and a vicious defensive line surrounding him. The matchup showcasing the Chargers revamped OL, featuring Slater and Corey Linsley, versus the Washington DL, featuring Young, Montez Sweat, and Daron Payne will go a long way to determining who will win this week 1 game.

On the other side of the ball, Fitzmagic will be testing his daring-do versus an elite Chargers’ defense, retooled to Brandon Staley’s vision which led the Rams to the top defense in the league last year. This game will go a long way to see how this Chargers’ D will stack up versus the Rams; D from a season ago.

Both of these teams feature Alabama quarterbacks who entered the draft these last two seasons. Both Mac Jones and Tau Tagovailoa have a lot to prove as each of their teams gave them a huge vote of confidence, putting their team’s future in their hands soon than expected. Especially Jones who less than a couple of weeks ago beat out Cam Newton.

This game could easily be determined by a defensive touchdown or a late field. One thing is for sure, with Tua and Mac, Dolphins versus Patriots are going to be must-watch matchups for years to come.

MY excitement for this matchup has little to do with the game itself and everything to do with the atmosphere. Yeah, I get it, Ravens versus Raiders features two teams very much in the AFC playoff picture as one won a playoff game last year and the other was in contention late. And yes, I also understand that this game features Yannick Ngakoue playing versus his former team. And if I really wanted to search, I’m sure I could find a lot more to talk about.

But I want to talk about the atmosphere of this game and what this means for Las Vegas. Just let your mind run wild for a moment. Monday Night Football, week 1 of the 2021 season. Fans are back in the stands for the first time in over a year, and for the first time EVER in Las Vegas. Allegiant Stadium shimmers in the darkness as we all hail our new Roomba overlords. A Black Hole emerges bringing new darkness to the Vegas strip. The spectacle, an insane atmosphere with wild fans adorned with spikes and skulls, not just returning but rather emerging for the first time. The Black Hole 2.0: Vegas Edition.

As a young fan watching the game I always dreaded watching my team play versus the Raiders on a Monday or Sunday night game. The atmosphere was always intense and the fans alone made me feel defeated before the game even began. I can’t wait to see what the Vegas version of this phenomenon is going to be, but one thing is clear: there will only be one time this Black Hole will re-emerge, and it will be a season-opening Monday Night Football matchup, as fans come back from a year of absence, versus a cursed team of ill-omen. Times like these come but once, then…nevermore. 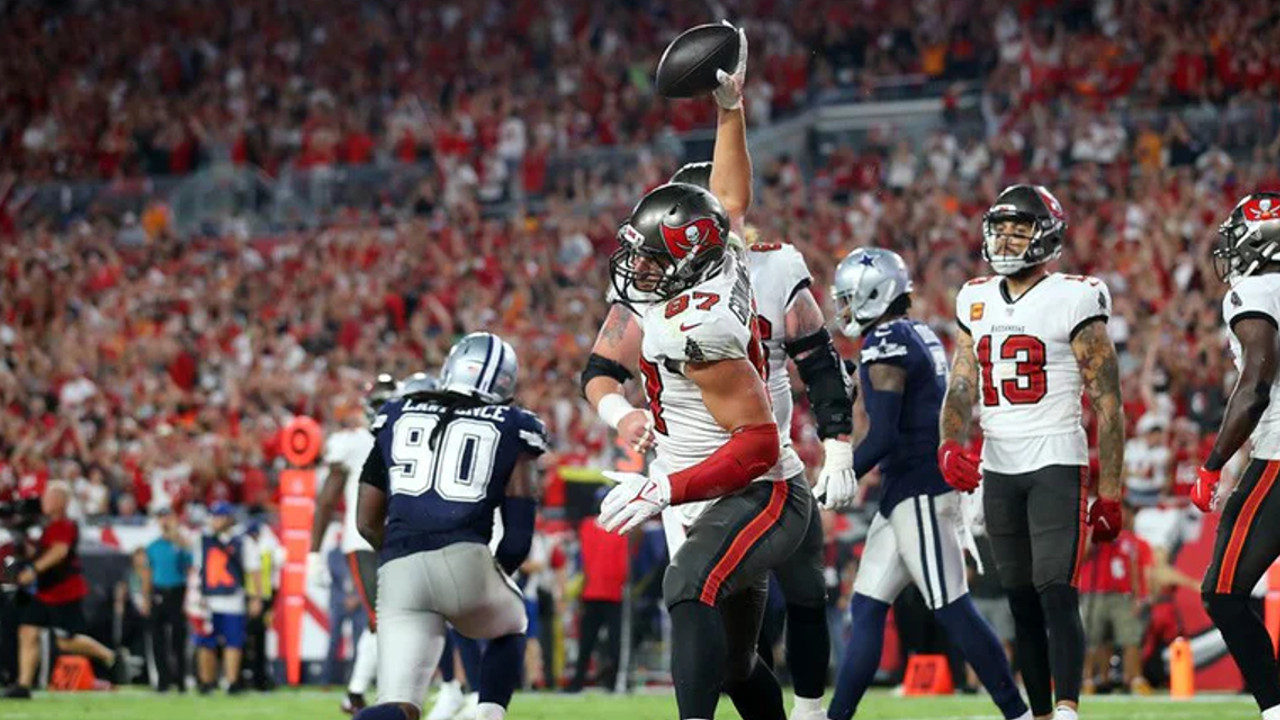