If day one belonged to Pakistan and the spectacular debutant Abrar Ahmed, then day two certainly belonged to England, who placed themselves in the driving seat to win both the Test match and the series. Pakistan’s innings capitulated dramatically as another bespectacled spinner hogged some of the limelight; Jack Leach took four wickets as Pakistan were bundled out for 202, a deficit of 79, wasting their strong overnight position. England’s batters pressed on their advantage, with Ben Duckett and Harry Brook making fifties as England closed on 202-5, an imposing lead of 281 on a pitch rapidly deteriorating.

Pakistan began the day well-poised, with Babar Azam and Saud Shakeel continuing their assured work of yesterday evening, the increasingly impressive Shakeel reaching his second Test fifty. England’s bowlers were disciplined without creating any notable chances. Babar was looking in particularly ominous form, and it took something special to remove him, Ollie Robinson bowled him with an absolute beauty- just his second ball of the match, getting one to wobble through the gate as Babar attempted an expansive drive.

England’s bowlers were buoyed by the breakthrough and started to strangle the Pakistani batters; Mohammad Rizwan was especially subdued, taking 28 balls to get off the mark. The contrasting approaches of the teams were laid bare in a short passage; Pakistan’s batters retreated into their shells after Babar’s dismissal, whereas if England’s batters found themselves in a similar situation, they would almost certainly remain positive and seek to shift the momentum as quickly as possible, not letting the bowlers settle.

The pressure reached a snapping point when Shakeel gave Leach the charge and miscued one to a backpedalling James Anderson, who clung onto a superb catch. Leach was bowling with increasing confidence and bowled Rizwan shortly after with a snorter that squared him up and hit the top of the off stump. Pakistan’s innings crumbled, three wickets falling with the score on 169; Nawaz, perhaps influenced by Rizwan’s innings, opted for the positive rather than the passive, coming down the track to Leach but only succeeded in picking out Robinson at mid-off. Joe Root also got in on the act, taking two wickets, Agha Salman falling in desperately tame fashion, meekly plonking one to Ben Stokes at mid-on while Mohammad Ali edged one to Zak Crawley at slip. Mark Wood got in on the act, taking the last two wickets to fall, as Pakistan was bowled out for 202. England’s bowlers showed great skill and discipline, but it was a disappointing batting performance from the hosts, who seemed to lose all confidence after their talisman, Babar, was dismissed.

Jack Leach finished with figures of 4-98, taking his one-hundredth Test wicket in the process, the 49th Englishman to do so. It was an impressive performance from Leach, a man whose position in the team seems to be under perpetual scrutiny from those outside the England camp. Leach is a popular player in the England set-up, while he has garnered something of a cult status after his Headingly heroics that detract from his skills as a bowler- as typified by his dismissal of Rizwan. Leach faced significant pressure today, trying to follow in the footsteps of Abrar’s outstanding performance yesterday. But Leach is a man of considerable character and rose to the occasion, exploiting the favourable conditions. Leach may lack the mystery element or the ability to rag the ball square, but when he gets into his rhythm, he is a potent weapon for England and deserving of his status as their frontline spinner.

Yesterday’s hero Abrar was quickly into the action as England began their reply, running out Zak Crawley with a neat underarm throw. It was a needless run from Crawley, and his wicket gave Pakistan a glimmer of hope. Abrar was soon waving his magic with ball in hand, Will Jacks- elevated to number three to allow wicket-keeper Ollie Pope a rest- was bowled attempting an ungainly heave, providing the debutant with his eighth wicket of the match. Ben Duckett and Joe Root stabilised the innings as England took a more measured approach to their innings, perhaps wary of the threat of Abrar. Predictably, it was Abrar who broke the partnership, removing Root for the second time in the match, Abdullah Shafique plucking a stunning catch one-handed catch at short-leg.

England’s advantage owed a lot to two of the stars of their winter; Ben Duckett and Harry Brook. Duckett has been a revelation on his return to Test cricket, playing with supreme confidence that is a testament to both himself and the culture that Brendon McCullum and Ben Stokes have cultivated, where free spirits are allowed to flourish and actively encouraged to play their natural game. Duckett mixes dexterity with wristy power, whether relentlessly sweeping the spinners or savagely cutting and pulling the seamers. Duckett judges length very quickly, an enviable trait that can be instrumental to success as a batter in the sub-continent. He made 79 in an innings of measured aggression, unlucky to be bowled by Abrar to one that kept very low, a dismissal which wouldn’t have dismayed Ben Stokes too much, an indicator of the pitch’s considerable wear. Harry Brook will resume on 74 tomorrow after another day of showcasing his immeasurable talent. His footwork against the spinners was especially impressive, combatting the turn and playing some lovely out-to-in shots through the covers.

England will begin in a position of considerable strength tomorrow, despite Abrar’s outstanding ten-wicket haul in the match. With Brook and Stokes at the crease, the Pakistani bowlers could face a chastening morning; they will need quick wickets to preserve their slim chances in the Test match and the series. England are on the brink of victory, with an already sizeable lead, as they seek to win their first Test series on Pakistani soil in twenty-two years. Brave England continues to reap the rewards. 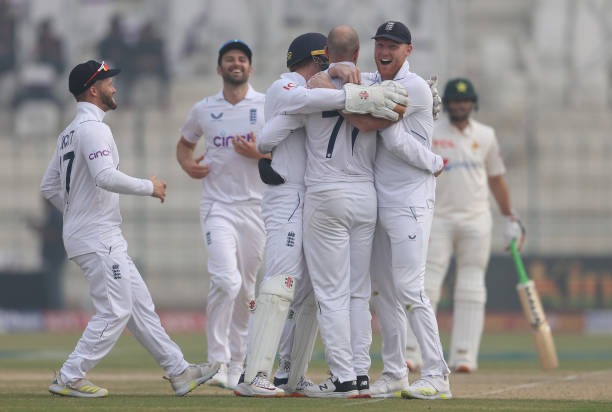