Pakistan’s middle order frustrated England on an intriguing third day in Multan that leaves the Test match delicately poised. It was a vastly improved performance from Pakistan’s batters after their implosion yesterday, showing greater resolve and tenacity, as the pitch held up much better than anticipated. Saud Shakeel continued his impressive start to his Test career, making an unbeaten half-century, while Imam Ul-Haq- batting at number five after a scan on his hamstring- made a classy 60 as the two put on 108 for the fourth wicket and frustrated England’s bowlers. However, Jack Leach conjured a wicket from out of nowhere just before close, inducing Imam into a edging a drive to Joe Root at slip, who showed sharp reflexes to hold on. It was a crucial wicket, and England will feel they are just one wicket away from exposing Pakistan’s fragile tail. Pakistan closed on 198-4, requiring a further 157 runs to win.

England began the day seeking to continue their dominance of yesterday and bat Pakistan out of the game. Harry Brook and Ben Stokes looked to be doing so, Brook reaching his second Test century as the pair moved the score along to 256. Brook has seamlessly filled the shoes of his Yorkshire compatriot Jonny Bairstow, creating a potential headache for England’s selectors when Bairstow recovers from his broken leg. With two of England’s most destructive batters starting to up the ante, it looked like the game was slipping away from Pakistan. It took an excellent catch from Mohammad Ali in the deep to remove Stokes and break the partnership. England’s tail failed to wag as the last four wickets fell for just nineteen runs, Zahid Mahmood picking up three wickets and denying the debutant Abrar Ahmed an opportunity to pick up another five-for. England finished on 275, a commanding lead of 354, yet you couldn’t help but feel they had left a few runs out there.

Pakistan’s chase got off to a strong start, with Mohammad Rizwan promoted to open alongside Abdullah Shafique. Rizwan was unusually circumspect yesterday but took a far more positive approach today as he and Shafique took Pakistan past the fifty mark. It took a moment of magic to break the partnership, James Anderson producing a sensational delivery, angling one into Rizwan, which then nipped away and pegged back off stump. Rizwan will feel unlucky; both of his dismissals in the match have been unbelievable pieces of bowling. His wicket brought their skipper, Babar Azam, to the crease, receiving his usual rapturous entrance. But Babar was quickly on his way back; Ollie Robinson, not to be outdone by his more senior partner, got one to jag back in sharply, and Babar was bowled, shouldering his arms, a huge moment for England. When he beat Shafique’s defense and obliterated his off-stump, Mark Wood made it a trio of high-quality wickets from England’s pacemen. At 83-3, England were firmly in the ascendancy, especially with the odd ball starting to keep low.

But Pakistan showed far sterner resistance than yesterday; the two left-handers, Shakeel and Imam, batted with skill and composure, negating the England spinners with neat footwork and rendering the men clustered around the bat redundant. Jack Leach, instrumental in Pakistan’s capitulation yesterday, struggled to find his rhythm, often dropping too short. Will Jacks put down a sharp caught and bowled chance when Imam was on 19 but otherwise, chances were few and far between for England’s bowlers as Shakeel and Imam quietly accumulated. Stokes was typically positive in his field placings as he chased wickets, encouraging the Pakistani batters to take the aerial option. He tinkered with his bowlers regularly, as his spinners struggled to provide the same level of control as the seamers.

When umpire Marais Erasmus failed to spot Imam’s tickle down the leg side off Wood, and Ben Stokes opted against the review, you felt it wasn’t to be England’s day. However, with the sun starting to dip, Leach conjured a vital breakthrough, changing the complexion of the day for England, who will now believe the match is theirs to win. They will have to be wary of complacency, though, with Shakeel at the crease, Pakistan will feel they have a slim chance of keeping the series alive. One thing is for sure; tomorrow promises a result in what continues to be a thoroughly compelling series. 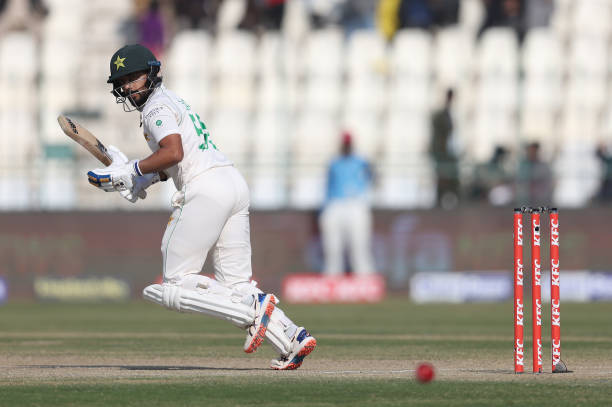