So after playing 48 matches among 24 teams, we’re only left with 4 Nations who stood firm against all the obstacles and surprises which are thrown at them in this year’s Pan European tournament, the Uefa Euro 2020 campaign has reached its final phases and we’re only one round away from the much-awaited final at Wembley to decide our new European Champion.

Today we will witness two of the continent’s biggest heavyweights setting fire to the iconic Wembley arc as the Azzurri’s take on their historic rivals in Spain.

The Italians are turning out to be a totally different outfit under Mancini compared to the Italian setups in the past who were known for their defensive solidity and scrapping for wins, transformed by Mancini this Italian team is full of excitement and vigour, they are a perfectly balanced outfit with a mix of experience and young prodigious talents, they press hard and do not fear at doing an all-out-attack throughout the game.

The Azzurri’s have reconstructed their footballing system to adapt to the demands of modern football and keeping their old principles intact, they did it all in a flash after their recent disappointment of not qualifying for the 2018 World Cup.

After coming to the Euros as everybody’s dark horses they first destroyed their group to pick up 9 points and without conceding a single goal throughout the group stages to become favourites to go the whole way to the finals. They faced a bit of scare in Austria in the Round of 16 but their defence stood firm to preserve a 2-goal lead to end the game 2-1 with Italians progressing to the Quarterfinals to face the Red Devils themselves in mighty Belgium.

Many thought that this might be the end of the road for the Italians as they are facing the tournament favourites in Belgium however the Azzuri’s have some other plans with Barella’s amazing goal and Insigne’s top bins curler took the Italians 2-0 ahead in the game before the duo of veteran defenders Chiellini and Bonucci produced another defensive masterclass by keeping quiet Belgium’s star striker Lukaku, the game ended in a hard-fought 2-1 win for the Italians to take them into the Semis.

On the other hand, Spain defied all their Spanish media critics early in the tournament after they played out dismal draws in the two opening group games against Sweden and Poland, they looked out of depth and lacked the prolificity upfront however they turned a corner by winning their final group game in some fashion crushing the Slovaks 5-0 at Seville.

They have not looked back since and played an entertaining 5-3 against Croatia before winning against Switzerland on penalties to defy all odds and book their place in the Semifinals of Euro 2020.

One player Spain have to thank though is Athletic club young goalkeeper Unai Simon, head coach Luis Enrique surprised many by picking Simon ahead of Man United star De Gea but that decision has now paid the dividends Simon’s inexperience at the Big stage was visible in the own-goal he conceded against Croatia but showed determination and kept plugging throughout the game and made some crucial saves at the end to prevent another comeback from Croatian’s late in Added Extra-time.

But It was La Roja’s last game against Switzerland in which Simon shone up the most, the game went to penalties after the Swiss valiantly fought to earn a draw, In the pens it’s was next to impossible for the Nati side to get past Simon he only conceded one penalty out of four taken to take Spain single-handedly to the Semifinals.

Italy are favourites going into the clash at Wembley as they are in such form never seen before in Italy, they extended their unbeaten streak to 32 games only 3 behind the leaders’ Brazil(1993-96) and Spain(2007-09).

Historic facts from the clashes between Spain & Italy

Italian head coach Roberto Mancini has suffered a major setback as he’s set to lose one of the crucial members of the Starting XI in full-back Spinazzola who suffered a serious Achilles tendon injury which could effectively keep him out of any footballing action for at least 4-6 months ending his tournament.

The Roma fullback emerged as one of the standout stars of the tournament for the Azzurri’s and performed admirably in Italy’s success so far. His ever-presence outlet on the left-flank and energy will be missed by the Italians.

There’s a worry in the Italian papers about who’ll replace him the only options are Florenzi and Emerson while Florenzi is coming on the back of a calf injury so may not be fit to start and Emerson hasn’t played much of club football for Chelsea, it’s a weak area on which Spain will looking to pounce upon.

As for Spain, Pablo Sarabia might not be available as he suffered a muscular adductor strain in the last game, he’s set to be replaced by RB Leipzig attacking midfielder Dani Olmo, who looked lively after coming as a sub in previous games.

There are some worries in the Spanish camp as Luis Enrique revealed in his pre-match presser that defender Laporte individually away from the squad on Sunday but will be back available for tonight’s clash, if any emergency occurs we can see the duo of Eric Garcia and Pau Torres in the Spanish backline.

Mancini will go with the preferred 4-3-3 setup with the principle’s to defend and press aggressively putting bodies in line if required.

Gigi Donnarumma will be guarding the goal for the Italians, arguably the best young goalkeeper on the planet is on the cusp of switching Milan for Paris soon.

In central defence, Italy have defensive assurances of veteran Juventus duo of Chiellini and Bonucci a lot of experience among them.

Full-backs Di Lorenzo and Emerson are expected to push high on the pitch and provide an outlet for the attackers as well as keeping things solid at the back in half-spaces in the Italian box.

At the centre of the park, we have a trio of Verraiti, Barella and Jorginho. Barella will have the license to go forward and cause mayhem in the opposition box with his exceptional dribbling and technical skill while Jorginho will focus more on keeping things ticking away and dictating the tempo alongside Verraiti who’s a fine passer and has an eye to destroy spaces not visible to the naked eye.

Federico Chiesa and Insigne will be acting as inside wingers especially Insigne who successfully found the top right-hand corner in the last game, the most Insigne-Esque goal I don’t know how many times I have seen him doing that in Serie A just try giving him time to pick his spot and he will make you pay.

Ciro Immobile has not been the most prolific in the tournament but will lead the line deputizing him would be the Rooster from Torino in Belotti, Sassuolo winger Dominic Berardi will also be available at the bench.

Enrique will not go away from the traditional 4-3-3 formation, the philosophy is simple to dominate possession and create a whole lot of chances for the forwards to score.

Unai Simon will be between the sticks for the La Roja’s who produced the most scintillating of goalkeeping displays in the penalty shoot-out against the Swiss in the Quarterfinals.

At the full-back position, we have Jordi Alba who has had another excellent season domestically at Barcelona and UCL winning captain in Cesar Azpilicueta.

Running the Spanish midfield will be Barcelona’s youth prodigy dubbed as the “new Iniesta” Pedri and Barcelona Legend Sergio Busquets, who may have lost a yard in pace but can be the key if La Roja’s want to beat the intense press from the Italians. Koke will play as a box-to-box destroyer.

This game has all the makings of a truly entertaining and enthralling game with both teams trying to dictate the state of play, Spain will play possession-based football which comes with some remits as you become vulnerable on counters and set-pieces, Italy will try to regain and attack with purpose with the directness of Chiesa.

I’m predicting a 3-2 narrow win for the Azzurri’s with Insigne and Olmo scoring a piece for their respective teams to take the game in Added Extra Time with a 1-1 scoreline, the game will go crazy after that Immobile and Chiesa will net further goals to give the Italians a 2-goal advantage before Morata finally pulling the trigger to give Azzurri’s a late scare.

Do let us know your predictions in the comments section below and for more updates follow us on Forums. 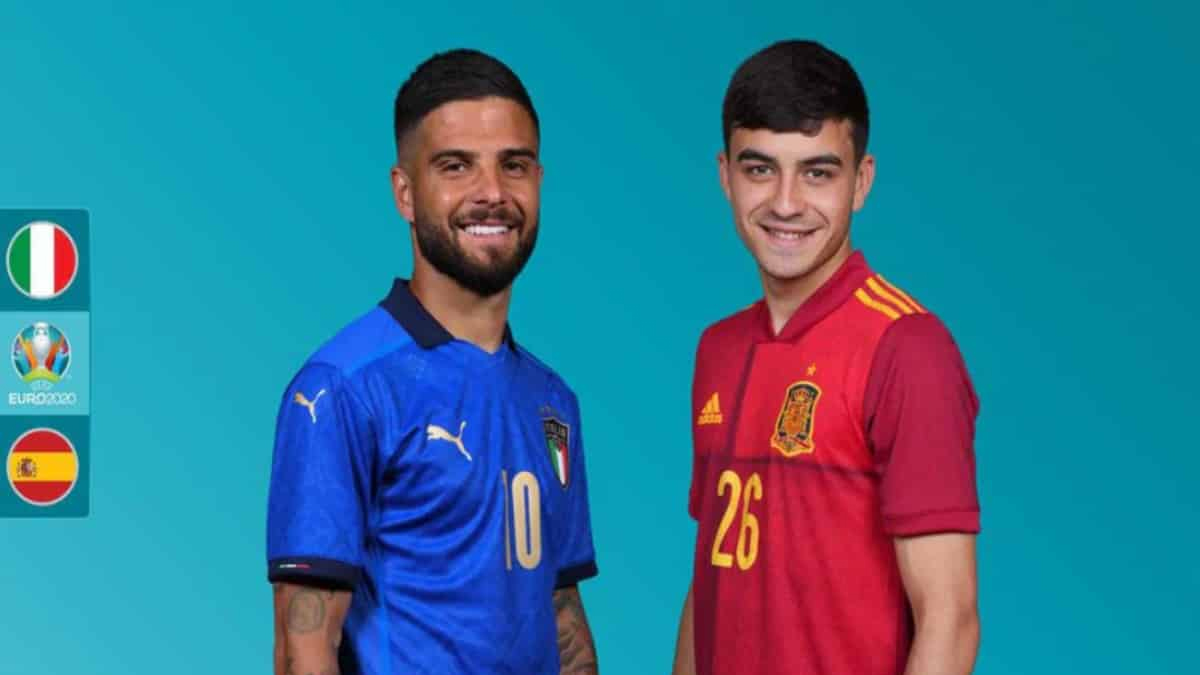