Italy international Leonardo Spinazzola was in tears as he was stretchered off in the 79th minute during Italy’s 2-1 quarter-final victory over Belgium on Friday’s night in Munich. He tore his Achilles Tendon while chasing the ball and as a result fell to the ground in extreme pain and agony. He was immediately diagnosed with a subcutaneous rupture on the left Achilles tendon by the medics. He will not be able to play any more in EURO 2020 and could even miss up to 12 months due to this injury.

The 28-year-old Roma wingback has been one of the brightest stars of the competition having started four of the team’s five games for the Azzuri. His consistency in providing high-quality performances for his team resulted in Real Madrid, Barcelona and Chelsea all getting linked with him in recent weeks to secure his services for themselves.

His teammates made sure to pay him an excellent tribute after the game by chanting his name out loud during their plane journey from Munich, Germany to Italy. Italian Football Federation president Gabriele Gravina said: “I felt very sorry for Spinazzola because he had been giving so much to this team. I wish him the best of luck for a quick return, because not only is he a great professional, but he has also shown great personal qualities.”

Italy’s boss Roberto Mancini also voiced his reaction by saying, “He has been one of the best players of this tournament and he will still be even if he can’t play in the next games. We are very very sad about what happened, it seems quite a serious one.” Insigne was also found speaking his mind on Leonardo Spinazzola‘s injury, “It’s a great loss, we will try to go all the way above for him. Up to today, he has been such a key player, an influential player for us”.

According to talkSport, the new Roma manager Jose Mourinho also told that he has already spoken to the player, who told him that his international teammates are very confident.

Belgium international and Real Madrid Goalkeeper Thibaut Courtois’s sister Valerie recorded a video of Spinazzola receiving treatment on the ground in Munich and posted it on his brother’s Instagram story with the caption, “That’s what we call tricks of the trade.” But later it was confirmed that Spinazzola had ruptured his Achilles Tendon and will have to undergo surgery. Hence out of guilt and remorse, Valerie apologized to Leonardo Spinazzola for putting wrong accusations on him.

Spinazzola is now set to visit specialist Professor Saraki Orava at the NEO Hospital in Turku, Finland as reported by Sky Italia and Italy will be forced to play Spain in the semi-finals of the EURO 2020 on Tuesday at Wembley Stadium in London without Spinazzola’s services at their disposal. The second semifinal match will be played on Wednesday.

We all hope for Leonardo Spinazzola’s well being and wish him luck for his speedy recovery. 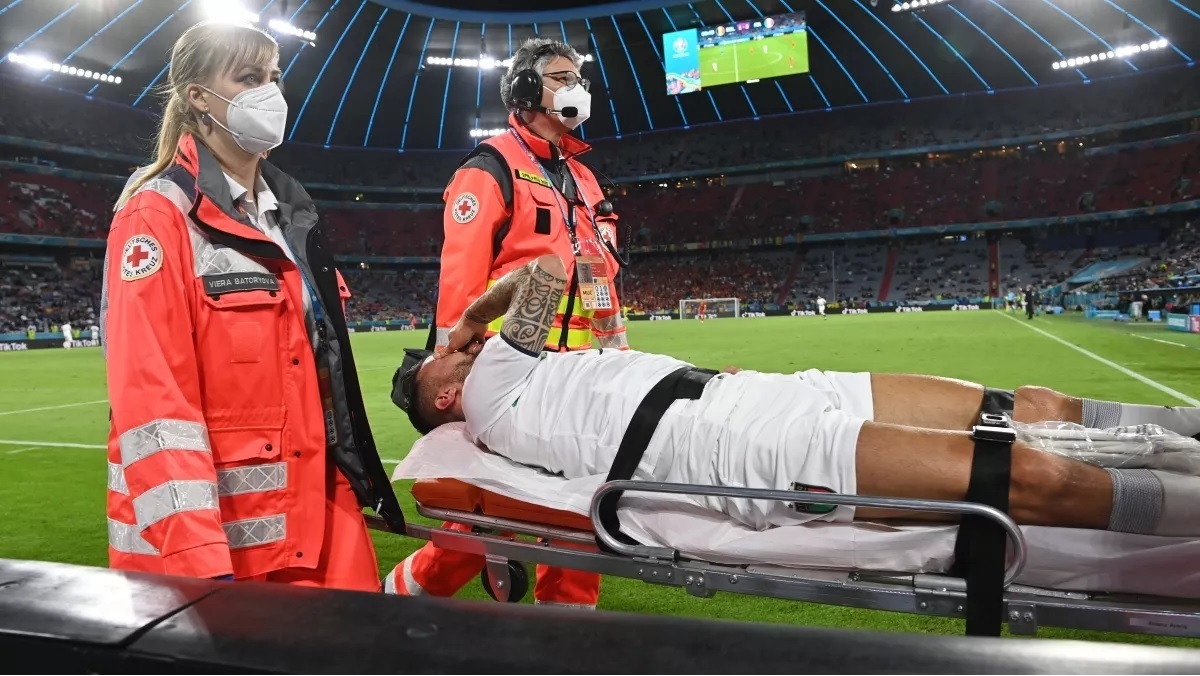