The NBA Finals are set as the Phoenix Suns and the Milwaukee Bucks will face off to see which team will hoist the coveted Larry O’Brien Trophy. For the Suns, this is their third appearance in the NBA Finals, with 1993 being the last time they’ve made it this far. For the Bucks, they returned back to the Finals for the first time since 1974. This is a history-making Finals for both teams, and here’s a preview, along with analysis and predictions on who will win this year’s NBA Finals.

Point Guard: Chris Paul vs. Jrue Holiday
Many basketball fans wondered if they would ever see Chris Paul reach the NBA Finals. After many years, that possibility is now a reality, however, winning the Finals is the next step. Against the Bucks, Paul averaged 25.0 points and 10.0 assists per game with a 54.5 percentage from three-point land.

Jrue Holiday, on the other hand, has been playing exceptionally throughout the playoffs for Milwaukee Bucks.

Holiday came up big for the Bucks in the Eastern Conference Finals against the Atlanta Hawks, specifically Game 6, knocking down 27 points and nabbing 9 rebounds. Against the Suns, Holiday averaged 25.0 points and 8.0 assists per game with a 33.3 percentage from behind the arc.

The point guard matchup between Paul and Holiday will be intense as both players are known for their scoring, however, Paul has more layers to his game that can change the course of the contest.
Advantage: Phoenix

Shooting Guard: Devin Booker vs. Khris Middleton
If this postseason has taught us anything, it’s that Devin Booker has arrived as a superstar in the league. Booker’s playoff debut is nothing short of impressive, having defeated the defending champion Los Angeles Lakers in the first round, sweeping the Denver Nuggets in the second round, and going the distance against the Los Angeles Clippers in the Western Conference Finals. Booker also averaged 27.0 points and 5.0 assists per game.

Another player that’s also been impressive throughout the playoffs is Khris Middleton. Already an all-star and now an Olympian, Middleton continues to elevate his game while being a reliable player for Milwaukee. While some may say that Middleton isn’t a star player, one can’t deny how organic his rise has been from the beginning and will only continue to get better, as he averages 22.0 points and 8.0 rebounds per game.

Booker and Middleton will put on a high scoring showdown throughout the Finals, but the real question will be if Middleton can keep up? Booker has been consistent through every game, while Middleton has his moments and comes alive during the third quarter to revitalize Milwaukee. It will all come down to who wants it more.
Advantage: Phoenix

Small Forward: Mikal Bridges vs. PJ Tucker
Mikal Bridges may not be a streaky scorer like Booker or a floor general like Paul, but he does just enough to help the Suns. Bridges contribute on defense and rebounding, plus helping Phoenix get second-chance points when it matters. Bridges isn’t the only player who’s known to do the dirty work on the floor.

PJ Tucker, like Bridges, isn’t known for gaudy numbers, but always brings a hard-hat mentality on the floor. Tucker showed his tenacity in the second-round series against Kevin Durant and the Brooklyn Nets and once more in the Eastern Conference Finals. He will have to bring that same intensity for Milwaukee where it matters.

Bridges averages 18.0 points per game, whereas Tucker averages 2.5 points per game. This won’t be a pretty matchup, so expect a lot of bumping and charging.
Advantage: Even

Power Forward: Jae Crowder vs. Giannis Antetokounmpo
Jae Crowder returns back to the NBA Finals after an unsuccessful campaign with the Miami Heat from last season. Crowder is still focused on the big picture, being a reliable force for the Suns. Crowder averaged 7.5 points and 2.0 assists per game against Milwaukee during the regular season, but you wouldn’t know it from watching him throughout the postseason.

Giannis Antetokounmpo has finally reached the Finals, but it came at a tough price. Giannis suffered a knee injury during the Eastern Conference Finals and listed as day-to-day. Should Giannis ever see the court, He will be in a battle against Crowder, who is no slouch on the defensive end.

Crowder may be thankful that he may not have to face Giannis, but once the Greek Freak is medically cleared to play, the real battle will begin.
Advantage: Phoenix (for now)

Center: DeAndre Ayton vs. Brook Lopez
DeAndre Ayton played like a big man on a mission for Phoenix. In the last three games of the Western Conference Finals, Ayton produced double-double figures, propelling the Suns greatly on both ends of the floor. However, against Milwaukee, Ayton averaged 18.0 points and 1.0 assists per game.

Brook Lopez also played like he had something to prove and more. In the last two games of the Eastern Conference Finals, Lopez damaged the Hawks with bruising power in the paint while putting up double-double figures. Against the Suns, Lopez averaged 8.5 points and 1.0 assists per game.

Ayton and Lopez will bring all the physicality in the paint and will try to outdo one another in how many double-double figures they can put up. If Lopez can bring the same game he had against the Hawks, it will be a very interesting matchup.
Advantage: Phoenix

Bench:
The Suns have a bench core of Cameron Payne, Cameron Johnson, Torrey Craig, and Dario Saric. A group of players that can provide on defense, but for Payne, who played in absence of Paul, his numbers and production increased as he stepped up for Phoenix. Keep an eye on Payne to do the same.

The Bucks have a core consisting of Jeff Teague, Bryn Forbes, Pat Connaughton, Bobby Portis, and Thanasis Antetokounmpo. This bench core brings experience, spacing, and physicality, which will help Milwaukee throughout the Finals. Bryn Forbes has been deadly from behind the arc and Bobby Portis looks to step up in the absence of Giannis.
Advantage: Milwaukee

Coach:
Monty Williams and Mike Budenholzer have coached their teams masterfully and utilizing the talents of their star players. For Budenholzer, being in the NBA Finals isn’t something new to him, having been an assistant coach to Gregg Popovich during his time with the San Antonio Spurs. For Williams, it is the accumulation of a lengthy career spanning back to his playing days and learning from his early coaching days with the Portland Trail Blazers and New Orleans Pelicans.

This will be a chess match between the coaches looking to get a checkmate over the other.
Advantage: Even

Phoenix brings a lot of youth and a hungry point guard looking to win his first NBA Finals. Milwaukee has players hitting their stride while still in their prime. This will be a matchup where real basketball will be on display and everyone taking notice.
Prediction: Suns in six.

The NBA Finals start Tuesday at 9 PM on ABC. 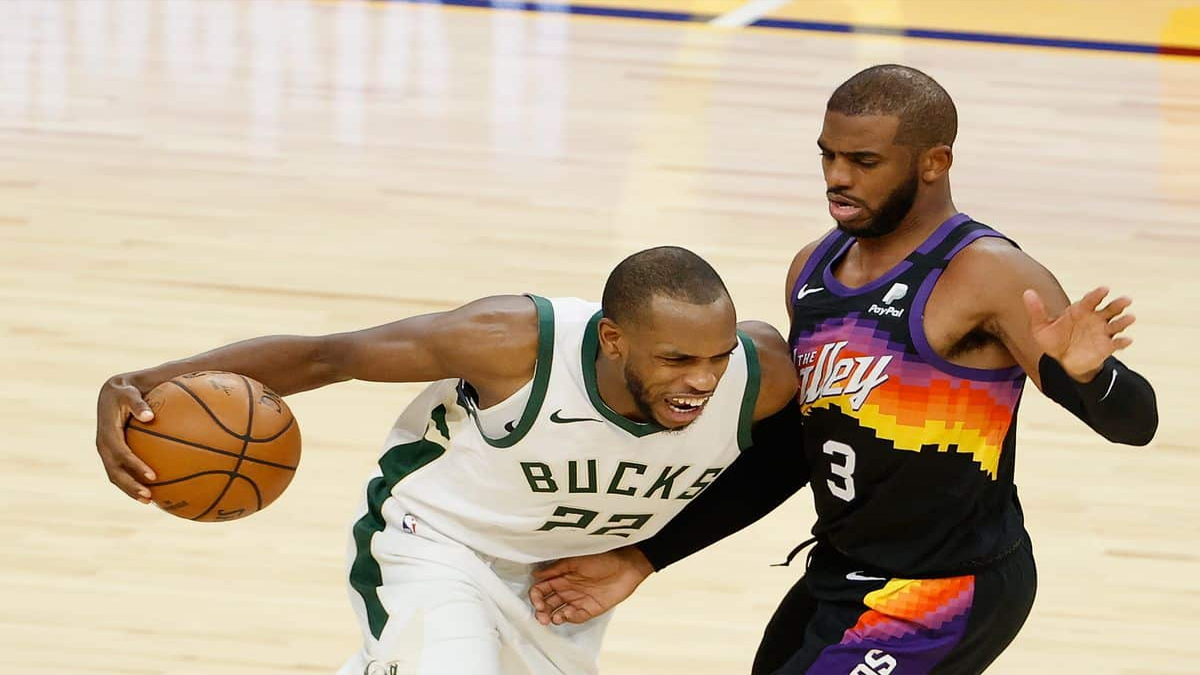