Moving day arrived on both the European and PGA Tour on Saturday for both the Joburg Open and RSM Classic, with players looking to either stay or get in contention for Sunday and also look to pick up important points in both the Race To Dubai and The FedEx Cup.

Let’s start in South Africa where cooler sodden conditions awaited the players on Day Three in what was harder scoring conditions compared to the first two days, and plenty of players certainly went in the wrong direction or struggled to get a consistent run of scoring going in their third rounds.

Some players bucked that trend though, Dane JB Hansen and home player Brandon Stone, flew out of the traps to post fabulous front nines, Hansen shot a six under par 29 on his to propel himself two shots clear half way through his third round.  He would end up carding a seven under par 64 and be second outright heading into the final day a shot behind the leader.

Stone himself was out in 31 (four under par) in his front nine to put himself right up there in contention, the South African has won twice in his own country so could he make it a third this week, well he would also card a superb seven under par round of 64 although he would need another round like today and hope the leaders faulter to do that you would suspect.

Other big movers in the right direction were South African Dean Burmester, who shot a six under round to get himself into T10th, Englishman Steve Surry who shot a five under par round to send himself into the top ten, and also another South African playing in his own country, Martin Rohwer, who also shot a five under par 66 to sit T-10th along with a handful of others.

Englishman Richard Bland, who is making his 467th appearance on the European Tour and is yet to win, sits in a tie for third with the likes of South African’s Stone, Norris and Blaaw, five back and needing a low round tomorrow to have any chance of notching his first maiden title.

Now Blaaw, the overnight leader, endured a tough day today, shooting a two over par 73 as he went from one shot ahead of the field to five back, after having absolutely no luck whatsoever today, but he dug in and is still in a decent position going into Sunday.

But the last word is reserved for player of the week so far, twenty-year-old South African Wilco Nienaber, who is impressing all with his calmness and temperament which belies his years.  He has shot rounds of 63, 67, 67 to be one clear going into the final round, he is just a yard or so off Bryson Dechambeau’s average driving distance, but his touch around and on the greens is superb.

He, like most of the top ten haven’t won on the European Tour yet, the only one to do so is Brandon Stone, so might they play a part tomorrow?  Well, he hasn’t shown any nerves so far this week and if he does go onto win tomorrow it would be a life changer for him, it certainly should be an intriguing final round tomorrow.  Below is the leader board after three rounds…

Anyway over to Sea Island in the state of Georgia for ‘Moving Day’ at the RSM Classic as all the players were now competing on the Seaside Course for both days over the weekend after alternating between that and the Plantation Course over the first two rounds.

The course is the more exposed of the two as well and with up to 18mph winds expected ball flight variation was important and the ones who had low ball flights especially would probably prosper here in these blustery but pleasant conditions with the temperature in the low 70s.

So could make a leap up that leader board and be in contention on the final day, and also pick up more early season points to get up the rankings in the FedEx Cup standings? Well early movers saw Americans Andrew Landry and John Huh shoot four under par front nines to get them right up the leader board halfway through their third rounds.

Landry would end up shooting a five under par 65 to finish T-8th and six shots off the lead, whilst Huh didn’t pick up any more shots so would be T-13th and a further two shots back and probably out of contention unless something crazy happens on the final day.

Kevin Kisner and Zach Johnson also gained a few places in their front nines as a cluster of players began piling up behind the leaders, with the sole European charge led by Austrian Bernd Wiesberger who was well placed halfway through his third round, four back at that stage. He was he on a sponsor invite and the seven-time European Tour winner was making the most of that invite.

Kisner ended up T-5th whilst Johnson rolled back the years to shoot a 65 and go into second, just three back from the leader.  Europe’s Wiesburger didn’t really kick on in his back nine and could only post a two-under par 68, seven back going into the final day.

So what of the final group of leader Robert Streb, Camilo Villegas and Bronson Burgoon, well Bronson looked well out of it after his front nine, shooting one over and was two over at one stage early on, but he steamed back on his back nine to be level with Johnson at fourteen under par in a tie for second, three shots of the lead.

Villegas looked good to keep pace with the leader for two-thirds of his round, but he ended the day five off the lead and in a tie for fifth place and seeing his chances of a first win in six years fading away slowly, which for many is sad indeed, he would have been a popular winner this week.

But nobody could keep pace with Streb, who after a solid front nine, put the accelerator down in the back nine to end up shooting a third-round score of 67 to take a three-shot lead into the final and is now bogey-free in 43 holes.  He will be tough to catch on the final day that is for sure, the leader board is below… 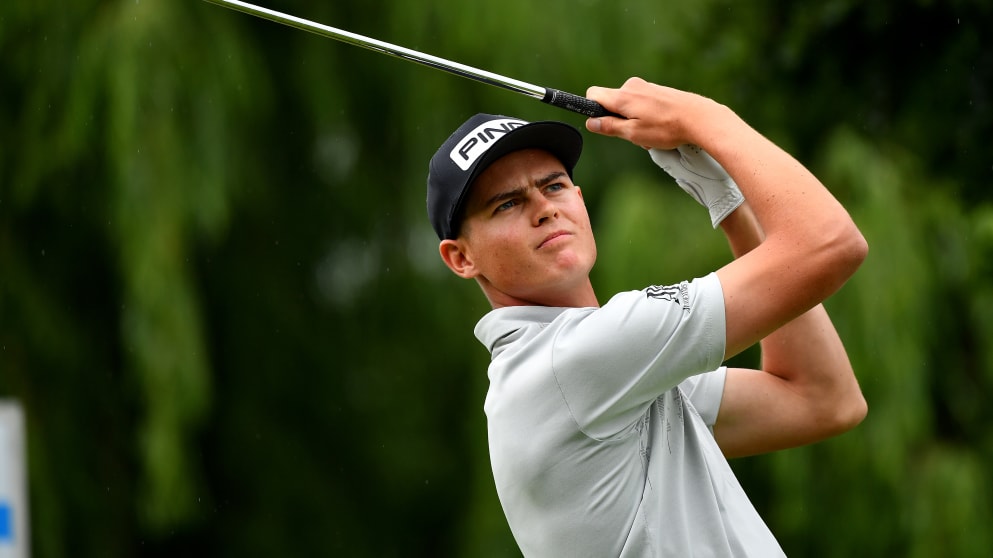