The Premier League returned this weekend after having last weekend off due to the international break and there were four games on Saturday to get our teeth into, starting with the lunchtime kick-off at St James Park as Newcastle welcomed Chelsea…

Chelsea moved up to second in the Premier League table after they grabbed their fifth win of the season after an own goal from Federico Fernandez and a Tammy Abraham effort sealed the points for the Blues.  Fernandez own goal gave Chelsea the lead after just ten minutes when the Argentine defender put the ball over his own line whilst under pressure from Ben Chilwell, and Abraham made sure of the points twenty minutes after the break following a lovely pass from Timo Werner’s pass.

The Blues oozed quality and if it hadn’t been for Toon keeper Karl Darlow, making excellent saves from Werner and Abraham, this could have been a lot worse for the hosts.  Toon did briefly threaten prior to Chelsea’s second through Isaac Hayden and Joelinton, and Sean Longstaff did strike the bar near the end, but it meant the Blues took the points and kept their sixth clean sheet in seven.  A lot has been said about Lampard’s tenure in charge of the Blues, not all of it positive, but sitting two points off top spot on Saturday evening isn’t too bad is it.

Steve Bruce is under pressure on the other dugout that is for sure, a lot of fans are not happy with how things are going there right now and with this circus off the field with the takeover fiasco, it cannot be helping matters off the field.  Hopefully for their sakes this is sorted out sooner rather than later.

Onto the afternoon kick-off then, and it turned out to be quite a dramatic end to this one at Villa Park as early pacesetters Aston Villa welcomed struggling Brighton & Hove Albion to the Midlands…

The Seagulls won at Villa Park for the first time in their history after they edged out Villa in what was a dramatic entertaining encounter.  Danny Welbeck, making his first start for the visitors, put them in front after twelve minutes after running onto an Adam Lallana poke forward to lift over the keeper, but Villa was level two minutes after the break when Konsa slid home for the hosts.  Eleven minutes into the second half though Brighton saw Solly March curled a delightful effort home and this proved to be the winning moment.

It certainly wasn’t the end of the drama though as a frantic period in stoppage time saw Tariq Lamptey sent off for the visitors for a second yellow, and then the biggest talking point of the game coming when March caught Trezeguet inside the box and Michael Oliver pointed to the spot for a penalty, and a chance for Villa to snatch a point.  However, good old VAR intervened, and Oliver ended up coming over to the pitch side monitor and to everyone’s surprise overturned the decision he had made.

Villa was bewildered, as were most who were watching, it was yet another VAR debacle in most people’s eyes, but apparently, they felt March got some of the balls, hence why the decision was changed.  Make your own minds up on that one.  It was a huge break for Brighton though, who held on to grab a massive three points and take them five clear of third-bottom West Brom.

For Villa they remain in sixth but it’s another home defeat.  They had enough chances in this one to get something from the game so they will rue those for sure.

Onto the big match at The Tottenham Hotspur stadium now as Spurs welcome Man City to North London with the hosts knowing they could claim top spot for at least twenty four hours with a victory here, oh and knock Chelsea off their perch after they went top earlier in the day…

Spurs went to the summit of the Premier League on Saturday evening after they saw goals from Son  Heung-min and substitute Giovani lo Celso send them to all three points.  Son put the hosts ahead after just five minutes when he produced a cool finish from Tanquy Ndombele’s pass, and then VAR intervened again in a Spurs Man City encounter and again it was against the visitors when Gabriel Jesus had handled in the build-up to Aymeric Laporte’s finish.

City enjoyed the greater possession but Spurs under Mourinho are well drilled and resilient, and when they had a chance come their way they took it with both hands as after a dream change from the manager lo Celso beat Ederson with a precise low finish after a Harry Kane pass, this after coming on only 35 seconds earlier for Steven Bergwijn.  A masterstroke you may say from Mr Mourinho??

He had certainly got the better of his opposite number in Pep Guardiola on this occasion as Spurs netted a statement win here, they end Saturday in top spot whilst City are now down in the tenth spot and already eight points behind the leaders with a game in hand.  Do Spurs dare to dream this season?

They have two London derbies coming up against Chelsea (oooh that could be tasty) and Arsenal (oooh that could also be tasty) so come through those unscathed maybe than can dream of a premier league title perhaps?  Early days I know but they have as good a chance as anyone else in what looks a wide-open season it has to be said.

The final game of Saturday came from ‘The Theatre of Dreams’ otherwise known as Old Trafford, as Manchester United hosted struggling West Brom who knew a point would take them out of the relegation zone, although United was way down in 13th themselves, seven points above their third-bottom opponents so they needed to win just as much and try and get closer to those top six spots…

United grabbed their first win at home for four and a half months although it was a grind against West Brom they do climb into the top half of the table as a result.  After a goalless first forty five minutes, VAR reared its ugly head once again when at start of second period after West Brom were awarded a penalty following Bruno Fernandes challenge on Conor Gallagher, VAR advised the referee to look at the screen, and the decision was duly overturned and no penalty given, with the reason given that Fernandes had got enough of the ball to deem it not a penalty.

Oh dear.  And surprise surprise minutes later Man United were awarded a penalty of their own, they seem to get awarded one every game, this after a Juan Mata shot struck Semi Ajayi on his arm with his back turned.  Fernandes though saw his penalty saved by the excellent Sam Johnston, but guess what, the penalty was ordered to be retaken as Johnstone had ventured off his line, deary me, and on the second occasion Fernandes went high and gave Johnstone no chance and United lead eleven minutes into the second period.

Tough few minutes for the visitors to take no doubt.  This proved to be the only goal of the game too, and saw West Brom remain in the bottom three on goal difference.

So, after Saturday’s matchup’s this is how the table looked… 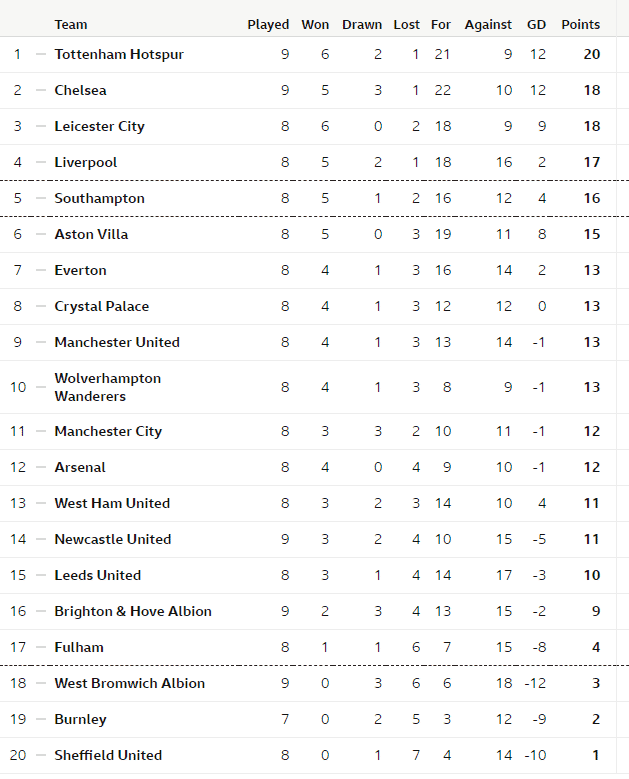 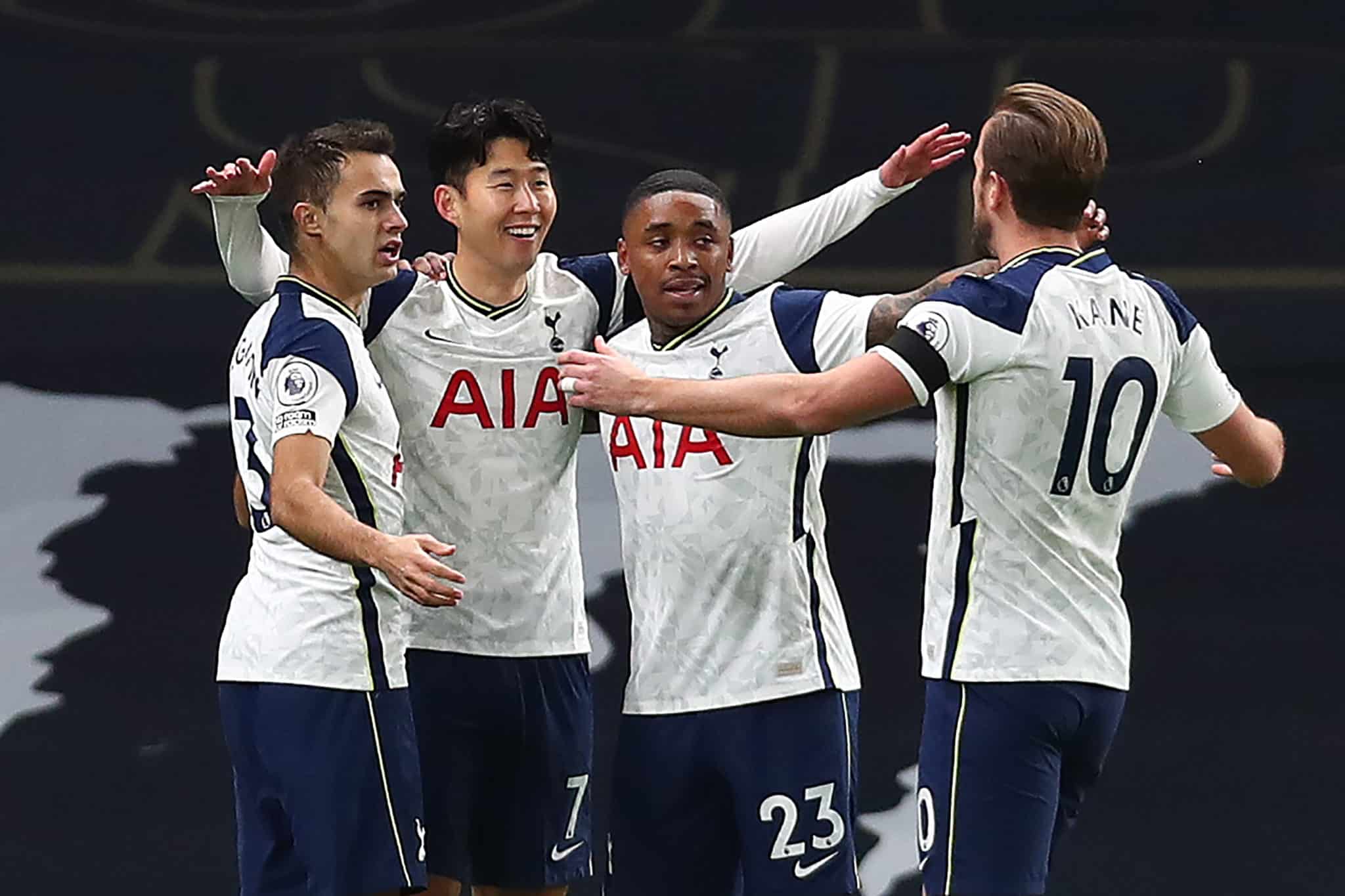