Round 10 of the Gallagher Premiership kicks off on Friday night with Leicester versus Harlequins the pick of the round this weekend.

1st place Leicester will be trying to maintain their perfect start to the season on Sunday afternoon, hosting 3rd place Harlequins who will be buoyed by returning internationals.

Elsewhere, Bath travel to Northampton on Saturday, still searching for their first win of the 2021/22 season.

Friday night kicks off with a West Country Derby between Gloucester Rugby and Bristol Bears at Kingsholm Stadium.

Gloucester edged an 8-try thriller 35-33 against the Wasps last weekend, surviving a late onslaught from the Coventry based side.

Gloucester head coach George Skivington noted his side’s disappointment with the ending on BBC Radio Gloucestershire, stating: “There is a lot of lads who have walked in pretty disappointed – I have had to remind them we have just taken five points on the road because they are disappointed with how they were in that last 15.”

The Cherry and Whites sit 6th in the table after the win as they look to build momentum with a derby victory.

Bristol are coming off a 36-20 loss to the Northampton Saints, seeing them drop to 3 wins, 5 losses on the season.

The Bears scrum let the West Country side down against the Saints, giving away penalties which allowed Northampton to run away with the game.

Bristol will hope to bounce back against Gloucester on Friday night having made 6 changes to their lineup, including the return of Steven Luatua from injury to captain the Bears and Harry Randall’s first appearances at scrum-half since the Autumn Internationals.

The Exeter Chiefs welcome 2nd place Saracens to Sandy Park in Round 10 on Saturday afternoon.

Sam Simmonds’ late heroics helped Exeter to overcome bottom side Bath, scoring a try with 5 minutes left before Joe Simmons kicked the conversion and a penalty to secure the win.

Henry Slade scored a conversion and two penalties on his return, seeing Exeter rise to 5th in the table ahead of a visit from high flying Saracens.

The London side claimed a dominant 25-14 victory over Sale, keeping them out of touch from a losing bonus point.

Billy Vunipola marked his return for Saracens from a four-week knee injury with an impressive performance, playing a key role in Saracen’s second try, dummying a pass before floating an assist to Sean Maitland.

The top scorers in the division closed the gap to Leicester to 6 points and will be looking to keep up the pressure on the runaway leaders.

London Irish play host to the Newcastle Falcons at the Brentford Community Stadium on Saturday.

Irish upset Harlequins in Round 9 with a 22-19 victory at Twickenham Stoop to win their second game of the season thanks to second-half tries from Rob Simmons and Ben White.

London Irish are coming off an unbeaten November having beaten Harlequins in the Premiership, Saracens and Northampton in the cup and drawing with Saracens in the league.

Newcastle are coming off a turbulent Round 9, drawing their matchup 24-24 with the Worcester Warriors after it was postponed due to a red warning for high winds.

Newcastle gave up a late try, allowing Fin Smith the opportunity to claim a draw for Worcester through a conversation.

Dean Richards, director of rugby for Newcastle, was frustrated with his side’s defensive efforts, saying: “We will look at our defensive frailties and why we conceded the easy tries that we did, but, at the same time, we scored four tries and probably should have scored another four.”

The Saints are coming off a commanding 36-20 victory against the Bristol Bears in Round 9 off the back of a triumphant second-half display.

Bristol were held scoreless for the final 38 minutes of the game with Northampton dominating the scrum and forcing countless errors from the Bears, whilst scoring 2 second-half tries of their own, with another ruled out by the television match official for a forward pass.

Bath, meanwhile, were defeated for the 8th time this season last weekend, faltering late on against the Exeter Chiefs to lose 23-16.

A spirited defensive display was once again not enough for Bath who continue to struggle on both sides of the ball.

It seems inconceivable that they will end the season 0-24 but it is difficult to see their luck changing against a strong Northampton side in Round 10.

The Worcester Warriors host the Wasps at Sixways Stadium during an action-packed Saturday afternoon in the Gallagher Premiership.

Worcester snatched a late draw against the Newcastle Falcons in Round 9 with Fin Smith converting Billy Searle’s 76th minute try as the game ended 24-24.

Despite sitting second bottom of the table, head coach Jonathan Thomas was delighted with his side’s mentality, saying: “It was great courage from Fin Smith to nail that kick in a big moment. But I am really proud of the character of the whole team. Sometimes it is not about all the technical or tactical stuff.”

“But the biggest thing we spoke about before the game was let us have a no excuses mentality. We knew it was going to be tough but we did not want to use all that as an excuse” he added.

Wasps, on the other hand, were unable to come from behind last weekend, falling 35-33 to Gloucester Rugby at home.

Despite two late tries, Wasps were unable to overcome a 16 points deficit during the final 7 minutes but their determination resulted in yet another close game for the Coventry based side.

The door is open for Worcester to build on their late draw from Round 9, but Wasps will keep themselves in the game as they always seem to do this season.

The matchup of Round 10 is reserved for Sunday afternoon as leaders Leicester Tigers welcome Harlequins to Welford Road.

Fresh from a bye week after the Autumn Internationals, it has been nearly a month since we have seen the Tigers play in the Premiership and Harlequins is as tough a return as they could have had.

Leicester’s prolonged rest has allowed them time to recuperate, however, it also may see them lose match sharpness having been out of league action since November 5th against Bath.

The news of Handre Pollard’s potential arrival will excite the Leicester fans and help to create a buzzing atmosphere at Welford Road.

Harlequins will be fired up too, looking to bounce back from a “really disappointing” 22-19 to London Irish last weekend.

Quins will hope to be buoyed by returnees after the Autumn Internationals with only Joe Marler featuring last weekend after his return from the England camp.

It is a game between 1st and 3rd in the Premiership, with neither side fully up to speed ahead of the game – hopefully, it will be an explosive game. 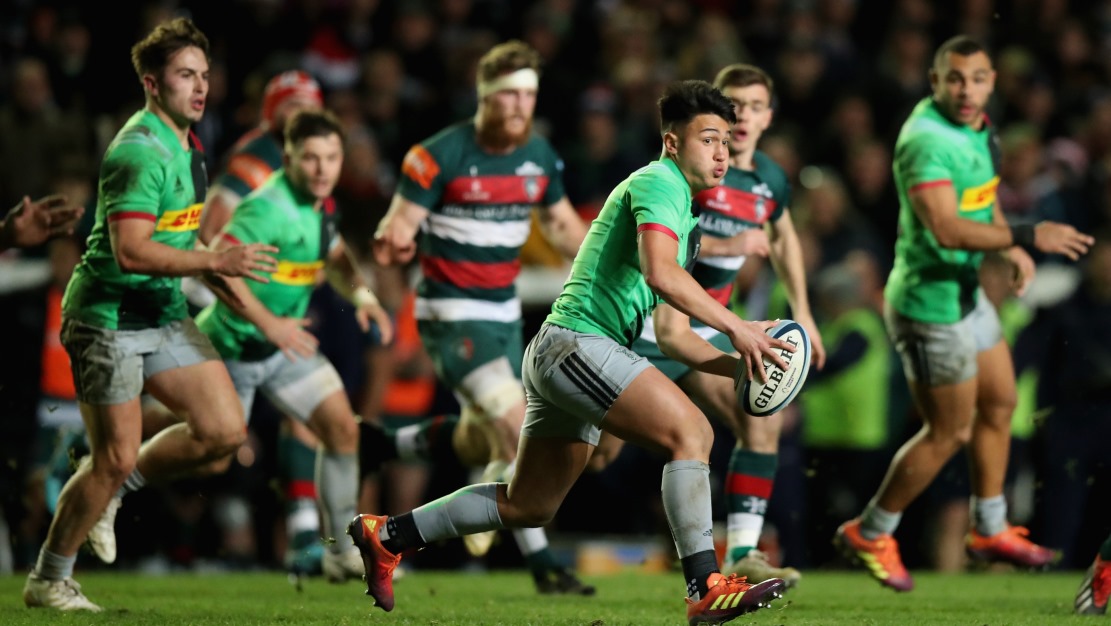