In this series of articles, we delve into F1’s forgotten history of women, starting with the life and career of Maria Teresa de Filippis.

Undoubtedly F1 has been dominated by men throughout its 72-year tenure. Not only are teams and their personnel mainly composed of men, but F1 has always marketed itself towards men. Only recently have women become a factor in F1’s target audience. With a masculine environment plaguing F1 for decades, it is natural to presume there have never been female racing drivers.

I was surprised when I delved into the history of F1 to see not only one but five women have competed in a World Championship race. Of course, I knew of successful female reserve drivers, such as Susie Wolff, who has taken part in F1 free practice sessions.

However, the five women who raced competed against men and earned a fair spot on the grid- a significant challenge for any man, let alone a woman. These women were remarkable regardless of their success, especially considering the eras they raced in.

Our story of forgotten women begins in the 1950s with Maria Teresa de Filippis. She made her debut in 1958, managing five entries and three race starts. The 1950s was the first decade of the Formula 1 championship, a time when Juan Manuel Fangio had already cemented himself in the history books as a 5x World Champion. Maria’s contemporaries included greats of the sport, such as Mike Hawthorn, Jack Brabham and Graham Hill.

De Filippis was Italian, born in Naples in 1926 to an Italian Count and a Spanish noblewoman. Emblematic of that glamorous era of wealthy Europeans, she was also a keen horse rider and tennis player. Her wealth gave her the space and opportunity to pursue racing, making her competitive debut in 1948 during a hill climb in a Fiat 500.

Despite her upbringing and support from Count Franz, her father, she still encountered the same barriers other women have experienced when trying to enter motorsport. Her brothers actively bet against her racing, and when she tried to enter the French Grand Prix in 1958, she was told:

“The only helmet a woman should wear is the one at the hairdresser’s”!

Regardless of her gender and the sexism that must have surrounded her, she had a fruitful journey into Formula 1. In 1954 she came second in the Italian sportscar championship, prompting Maserati to employ her as a works driver.

The Maserati was a championship-winning car in this era, with Fangio winning the 1957 World Championship in the Maserati 250F. Fangio was a friend of de Filippis during her time in Formula 1. In a 2006 interview, she recounted feedback he gave her:

“You go too fast, you take too many risks.”

But back to Maria! She competed in a Maserati 200S during a support sportscar race for the Naples Grand Prix in 1956. Starting from the back of the grid after missing practice, she climbed from last to finish second. There have also been claims that she turned down Enzo Ferrari for an opportunity at a drive. Despite sexist attitudes in the 1950s, Maria Teresa was a sought-after individual based purely on her racing capabilities.

These successes eventually led her to enter the 1958 Monaco Grand Prix.

Her career in Formula 1 was less impressive but still noteworthy. Poor pace meant she failed to qualify for the Monaco Grand Prix alongside fifteen other drivers, including Bernie Ecclestone who never even set a time- I do wonder what became of him?

However, her next race, the Belgian Grand Prix, was her most successful. Despite qualifying 19th, she finished 10th due to everyone else retiring, but unfortunately, there were no points for 10th place in those days. Belgium 1958 was her only race finish. After the race, the King of Belgium wanted to meet her, impressed by her achievements.

It is crucial to remember that what she did at the time was remarkable. To be the first woman to race was a massive achievement and should be celebrated regardless of her results. Her presence showed racing could be a space for women as well as men and must have served as an inspiration to others.

In the final two races of the 1958 season, she DNF’d, well behind everybody else’s pace. Yet it was not her ability alone that dictated her results. For female drivers, there are more barriers than talent. De Filippis had to have the Maserati 250F modified, with special padding to reach the pedals, and the heavy steering ensured the car was difficult to drive. Single-seater race cars do not consider women’s bodies in their design, which is still a barrier today, let alone in the 1950s!

Maria entered the 1959 season, this time for Behra-Porsche, but failed to qualify for Monaco, which became her final race in F1. De Filippis was good friends with her team boss Jean Behra.

Sadly during the 1950s, death was a constant feature of motor racing. Rather than her ability to race, it was more the losses of friends and competitors that dissuaded de Filippis from competing. Behra, who drove for Ferrari in the 1959 season, died that year in a support race at the German Grand Prix. This loss, coupled with the death of Luigi Musso, who de Filippis supposedly dated in 1958, must have been traumatic, pushing Maria to say goodbye to the sport she loved.

Around 1960 Maria married and started a family. She never returned to motorsport until 1979, when she joined the International Club of Former F1 Grand Prix Drivers. In 1997 she was appointed Vice-President. Her link to Maserati and its legacy remained, becoming a founding member and chairperson of the Maserati Club in 2004.

De Filippis admitted to not being a fan of modern F1, her reasons being it had changed significantly from when she raced. With more women becoming interested in F1 and their stories coming to the forefront, it would be interesting to speak to her about W Series and the growth in a female audience. Unfortunately, she died in 2016 at the age of 89.

De Filippis had one objective only in Formula 1. Driving fast! With this came many risks, and after witnessing the deaths of fellow racers and friends, it is understandable that she left racing behind. She will, however, remain the first woman to race in Formula 1. For that, she will always be an icon associated with the European glamour of motor racing during the 1950s, the same as Fangio, Hawthorn, or Hill.

A woman would not race again in F1 for another 15 years! Until along came Lella Lombardi… 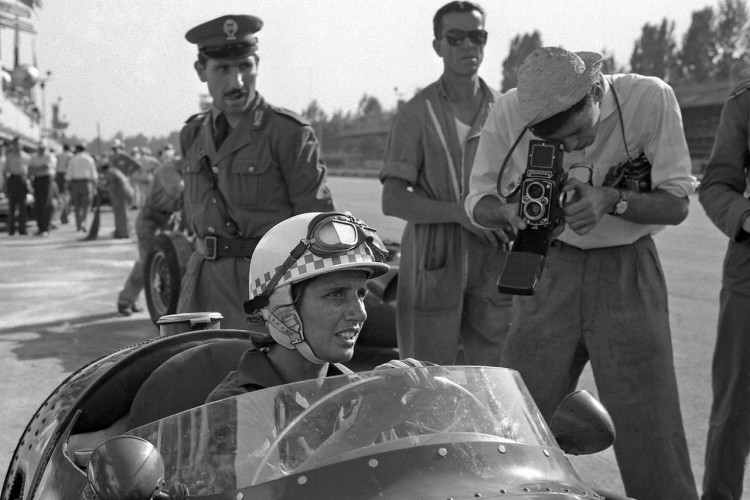