Fradi started well in their game, taking a four-goal lead after the first quarter, with goals from Tamas Sedlmayer, Denes Varga, and two from Szilard Jansik.  However, the lions of Brescia did well to recover, winning the second and third quarters, inspired by scores from Vincenzo Renzuto, Jacopo Alesiani, Maro Jokovic and two goals from the formidable Greek, Angelos Vlachopoulos.

Heading into the last quarter, the scores were evenly tied at 11-11, thanks to a man-up conversion from Vincenzo Dolce 3 seconds from the end of the third. But despite all Brescia’s pressure, they never took the lead in the game, and an excellent goal for Ferencvaros 20 seconds from full-time, courtesy of Canadian Nicolas Constantin-Bicari, Ferencvaros had one foot in the final. Then, right on the buzzer, left-handed Hungarian, Marton Vamos, converted his fourth goal of the game, confirming FTC’s place in their second successive Champions League Final.

Brescia coach, Alessando Bovo, will ponder on what could have been but for his team’s slow start. This defeat is one that is particularly frustrating given Brescia’s two previous victories over the Budapest outfit earlier in the tournament.

On the other hand, Ferencvaros coach, Zsolt Varga, is on the verge of taking his side to their second LEN Champions League title, an impressive feat even before considering they could win back-to-back titles. The Hungarian legend told the press, “we’ve played the toughest game of the season if not the toughest ever in the Champions League.”

He was full of praise for his opponents. He said that “Brescia is an amazing team, it really had everything in hand for the season, a true favourite for the title, which they had proved by beating Recco in the Italian final”

However, he ultimately believed it was the quality of his side that won the game. “I think it was all about our outstanding self-discipline, playing tough when it was needed and the ability to stay composed even in the most tense moments – that gave us this fantastic win.”

In the earlier semi-final, Pro Recco beat Barceloneta in a game that was decided by the finest of margins. Recco started sluggishly, losing the first quarter 4-2. The Spanish side were thankful for goals from Felipe Perrone, Alvaro Granados and two from Fransicso Fernandez, whilst the club from Genoa relied on their left-handers –  Serb Dusan Mandic, and Aussie, Aaron Younger.

However, a resilient and star-studded Recco fought their way back into the game at the end of the third quarter, in which Stefano Luongo, Ben Hallock, Francesco Di Fulvio, and again, Mandic, gave the Italian side a two-goal advantage (10-8) going into the final eight-minute period.

Despite another goal two minutes into the last quarter for Barca from Perrone, Recco stood firm, with two unanswered goals from Figlioli and Matteo Aicardi that essentially took the life out of CNAB Zodiac’s hope of Champions League glory.

As highlighted by the comments of Aaron Younger after the game, it was vital that Recco rescued their season after missing out on the Italian Championship to Brescia. “After the disappointing end of the National Championships in Italy, this tournament was very important for us.

“After that defeat, we got together and talked how to change our mentality in order to be able to win these matches. This is what we have showed today. We played all four quarters to the full and with the right mentality. Tomorrow will be another tough game, we have to be strong, play good and whoever plays, the better will win.”

The final of the LEN Champions League will take place at 20:30pm CET on Saturday 5th June 2021. 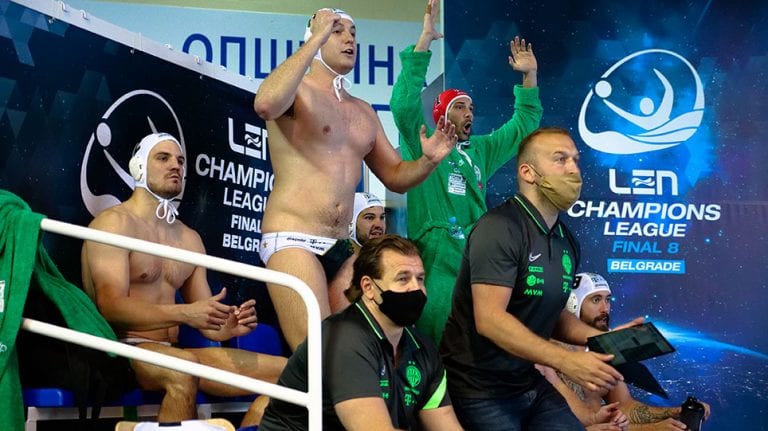