France will perhaps feel cheated as they lost narrowly against Greece in their first game of the FINA World League Finals, in a game in which they were superb

If the Japan vs Georgia game was a cracker, the third game of the day between Greece and France was even better. The quality of play, particularly in attack, was fantastic, making for an excellent spectacle.

A lot of credit has to go to France who were brilliant all evening. For large parts of the game, Greece had no answer to the well-drilled, set moves the French were throwing at them. However, Greece pulled away in the last quarter thanks to two unanswered goals from Konstantinos Genidounias.

It’s hard to judge whether Greece played poorly, given a dogged display from France, but for Theo Vlachos and his team, the result went their way perhaps only due to their superior experience.

The tone for the game was set early – it started very competitively. France, who only qualified due to Argentina’s withdrawal from the competition looked up for the game. But it was the Greeks who took the initiative via a penalty given away by Ugo Crousillat, that recent Olympiacos returnee Ioannis Fountoulis put away.

But the French weren’t behind for long. JUG’s Alexandros Papanastasiou was excluded and Alexandre Bouet scored with a driven shot to the left-hand side of Emmanouil Zerdevas’s goal.

Greece came again at France and re-took the lead through Stylianos Argyropoulous’s bounced near-post shot, but France replied immediately with an excellent man-up move that found post-man, Pierre-Frederic Vanpeperstraete, whose shot from close range thundered in off the underside of the bar.

The rest of the quarter was characterised by set 6 on 6 attacks with lots of turnovers. Papanastasiou had a close-range shot saved superbly by French keeper Hugo Fontani to keep the score at 2-2 after the first period.

France took the lead a minute into the second quarter when a patient man-up move found Alexandre Bouet in a really central position, 5m out. The finish was formidable, giving Greek keeper Zerdevas no chance.

But Greece responded well through Stylianos Argyropoulous, who like Bouet moments before, secured his second score of the game. The game was fantastically poised at 3-3.

Spandau Berlin’s Remi Saudadier was then excluded which gave Greece the lead –  Konstantinos Gkiouvetsis the goal scorer. Greece then added another from Konstantinos Genidounias – who found the far left-hand corner from position 2. Gkiouvetsis should have added another for the Greeks from close range, but he couldn’t keep his shot from drifting past the left-hand side of the goal.

The quality in attack then fell from the game – with both teams blocking well but shooting poorly. Fontani in the French goal then prevented Greece from taking a three-goal lead at half-time, making an excellent reaction save from the shot in the pit from another Olympiacos summer recruit, Christodoulos Kolomvos.

France won their third of three swims offs in the third period, but failed to feed the ball effectively to Thomas Vernouz who had set pit. Romain Marion-Vernoux was then excluded, giving Georgios Dervisis a guilt-edge chance, but he could not convert. He was punished seconds later, as France scored via an excellent goal from Charles Cannone.

Greece did get a sixth, however, when Alexandre Bouet was excluded. The shot was powerful from Stylianos Argyropoulous, but Hugo Fontani in the French goal probably should have done better than pushing the ball into the roof of his own net.

Konstantinos Mourikis nearly made it 7-4 to Greece from a quick attempt in the pit, but the shot sailed over the bar. France, however, broke up the other end and won a man-up from Alexandros Papanastasiou. French coach, Vernad Vukanic, thought it be wise to call a time out – and it was, as Romain Marion Vernoux converted from a powerful central shot into the roof of the net to make it 6-5.

France finally were on a parity when  Thomas Vernoux lept high on the post to convert the man-up given away by Mario Kapotsis. It was an excellent finish by the French Centre-forward, who was causing Greece a lot of problems.

Greece did then take the lead with a minute to go before the end of the third quarter. It was Ioannis Fountoulis, formerly of Hungarian side Ferencvaros, who scored his second of the game, with a hard, driven cross-cage shot that was rooted into the bottom left-hand corner of Hugo Fontani’s goal.

France made it 7-7 a minute into the last quarter, thanks to a delicate finish on the man-up from Charles Cannone.

The experienced Greeks had been here before though, and when Marion Vernoux was excluded, Greek Coach Theodoros Vlachos called the timeout which culminated in the eighth goal for Greece, courtesy of  Dimitrios Skoumpakis.

But once again, another outstanding move by France in man-up found Remi Saudadier on the post, and he scored with ease.

It took a Konstantinos Genidounias near-side bounce shot to make the score 9-8 to Greece, but they certainly would have been worried when Dimitrios Skoumpakis was wrapped on three – not least because of the threat France possessed in the attack. But Ugo Crousillat missed the man-up, allowing Greece to break up the other end for Genidounias to score his second in as many minutes.

It was a pivotal moment because Greece had their two-goal cushion. At 10-8 with two minutes to go, suddenly it looked like a tall order for France to win.

France maybe had hope when Fountoulis was excluded, but Konstantinos Genidounias intercepted a loose French pass that ended their chances in the game.

Greece will be relieved that they won their first game, but will perhaps be concerned about how easily France scored on their man-ups. Up next for them is a tough fixture against fellow Mediterranean’s Italy, whilst France may have more joy against Kazakhstan tomorrow 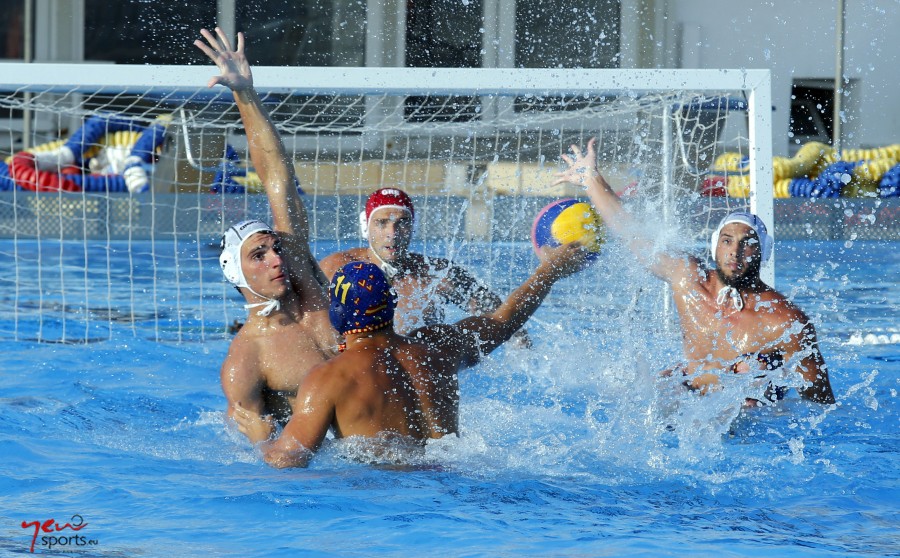