Host’s Georgia have won their opening fixture against Japan in an enthralling encounter that was separated by only one goal.

There was much excitement for host nation Georgia, as they opened their tournament against Yoji Omoto’s ever-entertaining Japan. The game was tight from start to finish, with plenty of excitement in the game for the several hundred Georgians in the multi-coloured stands.

There was nothing to separate the two teams after the first quarter. Novi Beograd’s Nika Shushiashvili opened the scoring before Fabio Baraldi added another for the home side. But Japan’s Keigo Okawa silenced the small home crowd with two excellent goals  – the first of which was a rocketing shot that hit the underside of the bar before bouncing in. Yusuke Inabi scored from the arc with a minute to go, but Baraldi scored with Georgia’s next attack, to grab his second of the game.

The second quarter also started as evenly as the first. Baraldi grabbed his hat-trick from Harukiirario Koppu’s exclusion, but Mitsuaki Shiga replied instantly for Japan on the counter.

The game then seemed to get away from the Olympic hosts as Dinamo Tbilisi pit attacker, Andria Bitadze scored two, back-to-back goals, the first from the pit and the second from Okawa’s exclusion. During this time, Japan were wasteful, with five attempts from both Yusuke Inaba and Mitsuaki Shiga barely troubling the Georgian keeper, Irakli Razmadze.

Japan’s pressure did eventually pay when they won a penalty from Valiko Vadani’s foul that Okawa was happy to convert, but Georgia went straight up the other end and scored when the 115kg Andria Bitadze found himself goalside of his marker, to grab his third goal of the game.

Japan made a quick start to the third quarter when Inaba converted a man-up from a driving shot centre-field, but Georgia replied instantly through Boris Vapenski taking the score to 8-6 in favour of the hosts.  Georgia then scored another when Marko Jelaca snatched the ball in the pit, before launching a long ball towards Fabio Baraldi, who couldn’t help but score his fourth of the game.

Japan needed a goal to stop Georgia from running away with the game, and they got one from the left-hand post when Katsuyuki Tanamura’s cross face pass found Yusuke Inaba for his fifth of the match. Inaba then narrowed Georgia’s lead to just one goal with several fakes before unleashing a low, bouncing shot to the keeper’s right.

At this point, it was goals galore. Fabio Baraldi was proving too much for this Japanese defence and produced a wonderful bit of skill in the pit to score yet another goal, taking the score to 8-10. But Japan responded via some good fortune when Keigo Okawa’s shot took a heavy deflection to dribble over the line, but then eventually equalised to make it 10-10 on the turnover foul from Revaz Imnaishvili that found the path of Atsushi Arai.

Andria Bitadze scored his fourth from the pit, but Japan fought their way back to an equalizer when a swift counter resulted in another goal for Okawa. Japan thought they had done enough to go into the last quarter level, but with two seconds to go, a long ball from Valiko Vadani found the masked Giorgi Magrakvelidze who bounced the ball nearside into the right-hand corner of the goal.

Into the last, Japan won the sprint, but Keigo Okawa couldn’t find his fifth goal, blasting the ball well over the bar. But their equalizer wasn’t far away when Georgia found themselves, two players, down (with Nika Shushiashvili gaining his third major), that Atsushi Arai converted to make it 12-12.

But naive defending from the Japanese allowed Georgia another extra-man situation that Marko Jelaca converted from the top of the arc.

Mitsuaki Shiga had a chance to level for Japan again, but his central shot on 7m drifted past the left-hand post of Georgian keeper, Irakli Radmadze’s, goal.  Yasuke Inaba had an equally as good chance from the left, but his shot was blocked bravely by the outstretched arm of Boris Vapenski, with the ball spiralling into the corner.

Japan’s last, and perhaps biggest chance to get something from the game came a minute from time when Beka Kavtaradze was wrapped on three. Head Coach of Japan who celebrates his birthday today, Oji Omoto, called the timeout, but two poor Japanese shots were easily saved by Irakli Radmadze.

Up next for Japan is the USA, who also lost their first game, whilst Georgia will play Montenegro.

The opening quarter was a cagey affair, with missed chances on both sides. However, the American’s had a narrow lead by the end of the first period with goals on the perimeter from Apollon Smyrnis’s sharpshooter, Alex Bowen, as well as an extra-player conversion from captain, Jesse Smith.

It took the experienced Aleksandar Ivovic to get Montenegro going in the second period, but the USA hit back immediately from Olympiaco’s Max Irving, who converted from Uros Cuckovic’s exclusion. But Montenegro weren’t trailing for long – they scored four in a row with two goals from Drasko Brguljan, as well as scores by Stefan Vidovic and Aleksa Ukropina, to take the score to 5-3. Johnny Hooper of UC Berkley, who like many of his compatriots have played in Greece this last year,  scored with ten seconds to go before half-time, kept his team only a goal behind.

Montenegro tried to pull away to take a three-goal cushion, firstly from a well-placed finish from Jadran Herceg Novi’s Aleksa Ukropina, before Aleksandar Ivovic grabbed his second of the game from distance. But the USA clawed their way back from two extra-player moves. The first was from a well-executed time-out move call from Head Coach, Dejan Udovicic, which was well-finished by Hooper. Then they netted again via JUG’s Alex Obert to take the socred to 7-6.

But USA’s good work was undone on the counter right on the buzzer. Who else but Aleksandar Ivovic was there to convert his third of the game.

With the score at 8-6 going into the last, the game was still all to play for. But Montenegro grabbed the all-important ninth goal when Ivovic fed the pit, allowing CN Marseille’s Uro Cuckovic to give his side once again the three-goal lead they desperately craved.

The Montenegrins then rubbed salt in the USA’s wounds as Olympiacos’s Hannes Daube was excluded, giving way for Herceg-Novi’s Marko Petkovic to seal the game at 10-6. 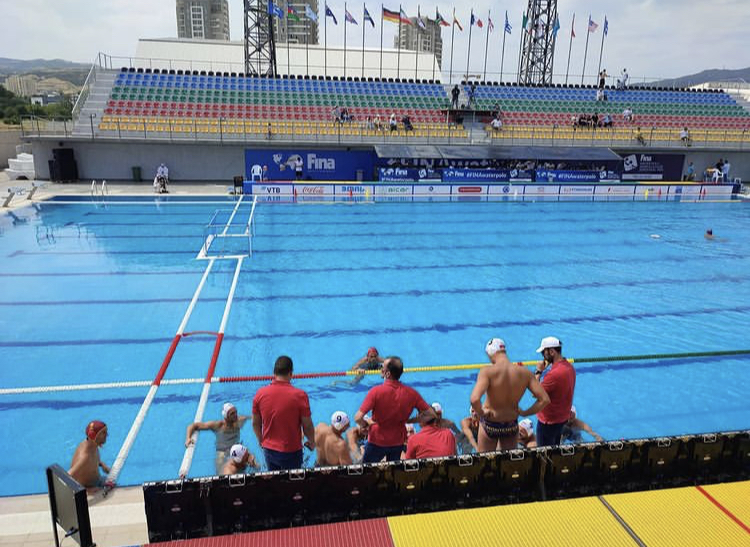