Spain were dominated by Adam Krikorian’s USA in the second game of the day in Athens.

The game promised much more of a contest given these two nations’ rivalry in recent years, but the USA’s defensive shift was outstanding, hardly giving a disappointing Spain a look in. However, to score 18 against Spain is no mean feat, with world-class performances in attack from Rachel Fattal, Maggie Stephens and Maddie Musselman.

Whilst the format of the competition means that Spain will still play in a quarter-final, finishing second in the group makes it likely that they will face Hungary in the quarter-finals if Russia beat Japan later.

It took nearly half a quarter before we got the first goal. Spanish captain Pili Pena was excluded and Makenzie Fischer converted. The USA then doubled their lead on the counter-attack, thanks to a tidy finish from SOCAL’s Rachel Fattal. Spain got their first goal after Bea Ortiz’s shot ricocheted off the bar before Judith Forca Ariza put it in from position 2. The USA replied instantly through birthday girl, Maddie Musselman before Forca Ariza got her second to make it 3-2. Ten seconds from time, Fattal then added USA’s fourth goal, with a thunderous shot that pinged in off the right-hand post of Laura Ester’s goal.

As the second quarter began, Spain won the sprint, but Alys Williams got a great block away, pushing the USA onto the counter. Roser Tarrago I Aymerich then was excluded, giving the USA an extra player advantage for which they very patiently converted via Maggie Stephens. Spain’s lack of discipline then costed them again, as Ortiz was excluded, allowing Musselman to drive the ball into the inside of the right-hand corner. Elena Ruiz Barril netted for Spain but the USA’s birthday girl struck back for the USA, with a lovely leaning, cross cage shot to make it seven.

The game was getting nasty for Spain, as then Stephens blasted a goal in at near range from a well-delivered ball from USA’s assist maestro, Alys Williams.

USA’s pressing was too much for Spain, and when the Spaniards did get a shot away, it always seemed like Ashleigh Johnson was there to stop them.

Fattal then got her third of the game, taking the score to 9-3. A Spanish comeback did not look likely.  Irene Gonzalez Lopez, Spain’s Centr-Back, had a difficult game against USA’s powerful forwards. She gave away a penalty that Fattal would happily convert. Judith Forca Ariza then converted from a penalty, before a silky no-look finish from Bea Ortiz beat Johnson at the near post to make the score 10-5 at halftime.

Early in the third, Spain were awarded a penalty after Alys Williams pulled back Alejandra Aznar Diez whilst swimming on goal. Forca Ariza converted. Then, Spain got another. On the man up from Aria Fischer’s exclusion, Bea Ortiz got her second of the game with a shot from the middle of the goal on 5m.

With the score at 7-10, USA really needed a goal to stop Spain’s advance, and they got it from Maggie Stephens after Marta Bach’s exclusion. The Stanford driver found herself on the right-hand side and drove the ball into the bottom left corner. A minute later, the USA had their five-goal lead back, with an expertly taken lob from Rachel Fattal – whose dink was her fifth of the game. Whilst at the start of the quarter it looked like Spain would mount a comeback, Makenzie Fischer made it 13-7 from a one-on-one on the left thanks to a lovely looped pass from Musselman. Makenzie Fischer then could have added another to her tally, but for an excellent save from Spanish keeper, Laura Ester. But the USA would have another chance to score, this time from an Adam Krikorian time-out that gave his captain Maggie Stephens her fourth goal of the game.

The fourth quarter saw more of the same from the USA. Makenzie Fischer grabbed her third of the game after her shot dribbled past Ester in the Spanish goal. Ortiz was then wrapped on three personal fouls, from which Melissa Seidemann scored under pressure. Aria Fischer then scored a lovely backhand from the pit, taking the USA’s advantage to ten goals.

Irene Gonzalez Lopez scored a lovely lob for Spain, but it was cancelled out by another USA goal from the pit by Seidemann. Spain’s left-hander, Judith Forca Ariza then scored the last goal of the game from the right-hand side, with a lovely top-corner finish. 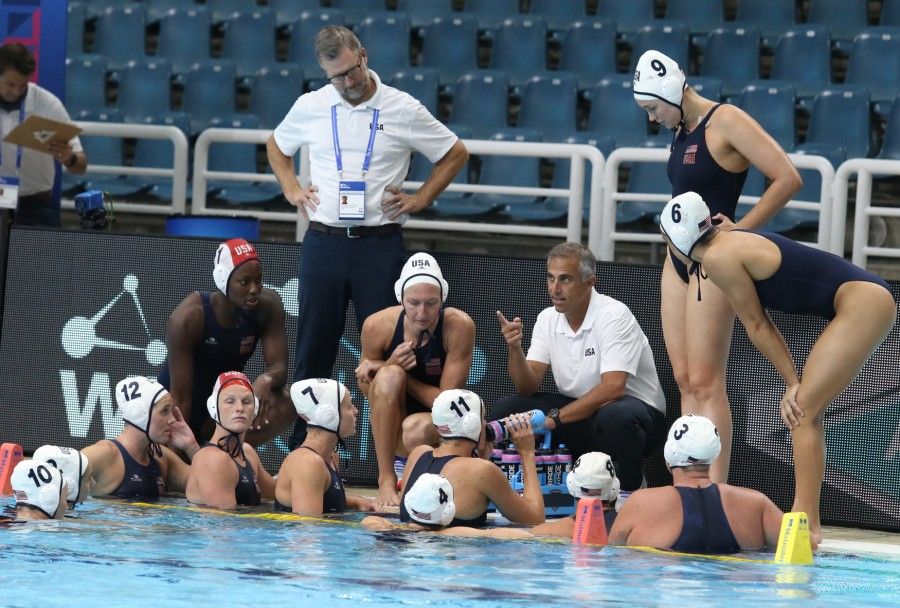