The Washington Mystics will take on the Seattle Storm today at 3:30 in Game 2 of the WNBA Finals. The Mystics dropped the first game but if they win today, all will be forgiven. Rookie Ariel Atkins dropped 23 points on Friday night but that was about it as the Washington Mystics couldn’t get production from their two best scorers in Elena Delle Donne and Kristi Toliver. In Game 2, Seattle will try to go up 2-0 and put the Mystics on the brink of elimination while the Mystics look to tie the series and steal home-court advantage heading back to DC.

Coach Thibault talked about the Mystics have to make adjustments for today’s game. But he said there’s a lot more to it than that.

“KeyArena has always been a tough place for a lot of teams to play,” Thibault said. “Having gone through the first game, hopefully our players will be a little bit more in tune with the energy needed to win a game like that. We made mistakes that just turned into layups. ”

“The lack of aggression came a little bit from fatigue, and from being on our heels from how the game started. The turnovers, and then they’re laying it in. They just got that burst where I just thought we were sloppy.”

“We just weren’t ‘us’ from start to finish,” said Washington Mystics forward Elena Delle Donne, who was 4-of-11 from the field for 10 points Friday. “We just couldn’t get ourselves going. And it felt like everything was a struggle. It was almost like everybody was trying too hard, like when you’re in quicksand, and you try too hard to get out, you keep sinking more.”

While you have to give credit to the Seattle Storm for putting on a shooting clinic, the Washington Mystics did look like they were in quicksand for large chunks of the game. The Storm shot 54.7 percent from the field, with Jewell Loyd (23 points), Breanna Stewart (22) and Natasha Howard (19) leading the way. Sue Bird only had 4 points, but was able to set up her teammates throughout the game.

“We played really well, but there were points, like in the fourth quarter, where they were more aggressive than us,” Stewart said, trying to find some flaws. “We have to continue to take advantage of what we do well. We were able to get out of the gate and run, and against Phoenix, that seemed like our hardest thing to do.”

“Doing that, especially with our crowd, it opens the game up and makes us play the type of game we want to play. As a whole, that was probably one of the best games we had, just because we had contributions from everyone, and it seemed like we were all on the same page defensively. Now it’s just come out and do it again on Sunday.”

Mystics will make adjustments on Sunday.

“Some matchup changes in guarding is usually a response,” Hughes said. “And maybe a change of schemes toward some of our more successful players, so they’re playing in more congestion. And a much more assertive presence coming at us; they’re going to put the ball on the ground more and go to the glass harder.”

While the Mystics may be the underdog in this series, no one expected the blowout that we saw in Game 1. Game 2 should be a much closer game with every mistake, every bucket, every block, every steal and every foul meaning a lot more than it did two nights ago. While I expect the Mystics to bounce back, they have to move the ball better as a team if they want to win. Too often they were left in the corner with nowhere to go and they have to be able to swing the ball around and try to draw fouls if it all comes to nothing. We know the Storm won’t let up and no one expects them to regress but if the Mystics can play the defense that they’re capable of playing, we could see the Storm shooters miss a little more and force them to take tough shots. Game 2 should be a heavyweight fight and the fans should be really excited about an excellent series. 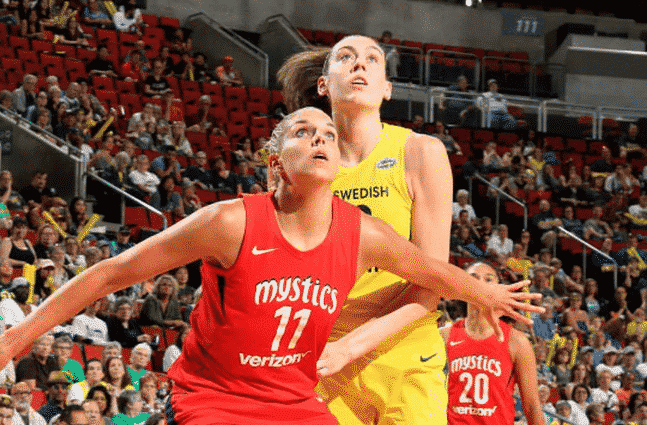