Why The Trade Happened?

Ben Simmons refused to play the entire season, after turbulent times with the Philadelphia coaching staff, dating back to last year’s playoff run and racked up fines of up to $19 million this season.

Despite Simmons looking to move since the last off-season general manager Daryl Morey refused to let the 3x all-star go without acquiring a top 30 NBA player and that he did with the appointment of 2018 NBA MVP and 10x all-star James Harden. As Simmons trade value decreased throughout the season and his stock dropped since last season’s woeful playoff performances it looked as Morey was wanting too much for what he was offering, however, it seems he has got what he was looking for.

Former Rockets GM Morey wanted to acquire Harden last offseason after building his relationship with Harden in Houston, however, was outdone by the Nets team bolstered with multiple all-stars and NBA champions. Morey deserves his credit for holding out and hopes that Hardens career low points per game in the last 10 years are a situational cause and that he can find his Houston form once again.

On the other side of the trade, the Nets looked to move James Harden on despite only attaining the offensive juggernaut in last seasons 2020-2021 trade. Harden has had to shoulder the heavy workload of the Brooklyn Nets this year during 2021-2022 as teammates Kevin Durant and Joe Harris have been out due to injury and Kyrie Irving only occupying a part-time role.

The consensus pre-season NBA Finalist now occupies the eastern conference 8th seed with a 29-25 record, whilst in the 16 games that all 3 All stars are on the court together, they had an impeccable record of 13-3.

Due to Harden’s eligibility for free agency in the offseason and the Nets struggles and Hardens rumoured displeasure Brooklyn had to make a move to acquire as much value as possible.

How does the trade impact each team?

The Brooklyn Nets obtaining Simmons gives them an all-star calibre player with elite defensive capabilities, 2x NBA All-Defensive First Team (2020, 2021), and outstanding rebounding (8.1 RPG) and playmaking (7.7 APG) ability. Nevertheless, Simmons widely publicised woes are his inability to make jump shots, which combined with paint beast and 5x all-star Joel Embiid made for a clunky offence with poor spacing as a result of lack of shooting prowess.

One problem the Nets do not have is shooting, when fully healthy, with of one the best assembles of shooters the NBA has seen with Durant, Irving, Joe Harris and Patty Mills whilst also adding another lethal shooter to the team involved in the trade with Seth Curry. With Simmons being surrounded by shooters this will open up the floor and allow him to excel and reach his full potential making it easier to both score and facilitate for his team.

The Nets have significantly improved defensively with the addition of Simmons, with Harden having previously been lamented for his defensive efforts in his career, yet it is one of the Australians best assets with the way he can guard 1 through 5 whilst being 6’11 and 240lbs is a game-changer for the Nets defensively.

As previously mentioned, the acquisition of Seth Curry bolstered the already stacked shooting power of the nets adding a career 43.7% 3-point shooter, who is having the best season of his career this year with career highs in rebounds, points and assists.

Furthermore, Brooklyn also added Andre Drummond, 2x All-star and 4× NBA rebounding leader, who despite seeming to be past his prime is a 9-year veteran who is averaging 8.8 RPG in just 18 minutes of play this season and still can be a starting centre on a successful NBA team.

It is yet to be seen how these 3 players will adjust in Brooklyn however may have taken the Nets out of contention this season as it will take a lot of time for players to gel and become accustomed to playing together and this squad will look to get a fully healthy team next season and be a force to reckon with.

This trade pairs this Seasons MVP candidate Joel Embiid with 2018 NBA MVP James Harden, but how will the two gel together?

The addition of Harden adds a whole new aspect to the 76ers with both the shot-creating ability of Harden alongside his outstanding playmaking where he has averaged over 10 APG the last 2 seasons.

Harden has had success with big men before with a great relationship in Houston with Clint Capela, however, Embiid is a different type of player than Capela and is less of a lob finisher, it may take time for the duo to form an on-court understanding yet the sheer greatness of the two players it is likely they will figure it out.

Head Coach Rivers now has the option of 2 players to take over the game either together or whilst one sits, which opens up the opportunity for the 76ers to dominate both the perimeter and paint offensively something that was not possible with Simmons and Embiid on the floor at the same time.

Alongside Harden, the 76ers have added 15-year NBA veteran Paul Millsap whose experience will be invaluable as a leader with an abundance of playoff experience who can be a teacher to the youthful talent that Philadelphia offers.

The Philadelphia 76ers are the current 5th seed in the eastern conference just 3.5 games out of the 1st seed with Harden joining the team this makes them a legitimate title contender who match up well against any team.

Who Won the trade?

Overall both teams got better in this trade with the 76ers getting the shooting and perimeter offence they needed whilst the Nets improved defensively and surrounded an outstanding finisher and playmaker with knockdown shooters.

However, to give one team the win it would be the Nets as despite the upside of Harden and the invaluable experience of Millsap they let go of a great asset in Seth Curry who has been a great piece for 76ers this year and the potential of Drummond in the Brooklyn team alongside future draft picks the nod goes to the Nets. 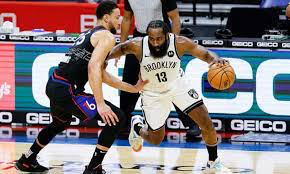