The Miami Heat returned back to the American Airlines Arena after a two day break and hosted the Houston Rockets. Throughout their series, both teams have won 32 games each against one another. Heading into this game, the Heat would be without Justise Winslow, rookie KZ Okpala, and Derrick Jones Jr.

Miami jumped out of the gate early with a dunk from Bam Adebayo and a three-pointer from Jimmy Butler. Though Houston would get themselves on the board with a basket from Russell Westbrook and free throws from James Harden, the Heat would answer back with a three-pointer from Butler and Duncan Robinson, plus a dunk from Meyers Leonard. With Miami leading 17 to 4, they would go on a seventeen to nothing run before Houston responded with a three-pointer each from Danuel House Jr. and Harden. The Heat closed the first quarter on a twenty to four run, taking a 46 to 14 lead.

The Heat continued their offense in the second quarter with another three-pointer from Robinson and a layup from James Johnson, who made his season debut. Houston responded with a layup from House Jr. and free throws from Westbrook, but Miami continued punishing them with quick cuts to the lane from Kelly Olynyk and Robinson. With Miami leading 59 to 23, the Rockets went on a twenty-one to seven run, looking to narrow the gap against the Heat, only for Goran Dragic to end the run with a three-pointer, followed by a layup from Butler. Harden would knock down two free throws, a layup, and a step back three-pointer to end the second quarter with Miami leading 71 to 49. Miami started the third quarter on a twelve to two run, led by Adebayo, Leonard, and Robinson, only for Harden to make a spin move and layup for Houston, followed by House Jr. making two out of three free throws. After a dunk from Leonard, Harden responded with two free throws and a tough three-pointer for the Rockets. With Miami leading 90 to 61, Houston went on a ten to nine run, which saw a Russell Westbrook three-pointer to close the third quarter. Despite this, the Heat led 99 to 71.

As the fourth quarter commenced, Miami went on a fourteen to two run, before McLemore ended the run with a three-pointer, followed by a jump shot from former Heat player Ryan Anderson. With Miami leading 117 to 84, Chris Clemons and McLemore tried to get Houston to rally back late in the game, but it would be too late as the Heat won 129 to 100.

Miami dominated the game and never once trailed against Houston. The Heat’s 46 points in the first quarter were the most points they ever scored in a quarter, shattering the previous record from a November 1997 game against the Los Angeles Clippers by a point. It should be also noted that the Heat’s 46 to 14 score in the first quarter was the highest differential at the end of a 1st quarter in team history.  A +28 was the previous high set in a January 2007 game against New York. Miami’s defense looked stellar against Houston, which allowed the Heat’s offense to explode the way it did against the Rockets. Miami has won 9 of their last 11 games against Houston.

For the Rockets, James Harden led the way with 29 points, Chris Clemons had 16 points, Ben McLemore made 14 points, Russell Westbrook and Danuel House Jr. made 10 points each.

For the Heat, Duncan Robinson had 23 points, Meyers Leonard with 21 points, Jimmy Butler made 18 points, James Johnson returned to the Heat with 17 points, Goran Dragic made 15 points, and Tyler Herro with 12 points.

The Miami Heat hit the road for the next three games, starting off against the Denver Nuggets. Game starts Tuesday at 9pm and will be televised locally on Sun Sports. 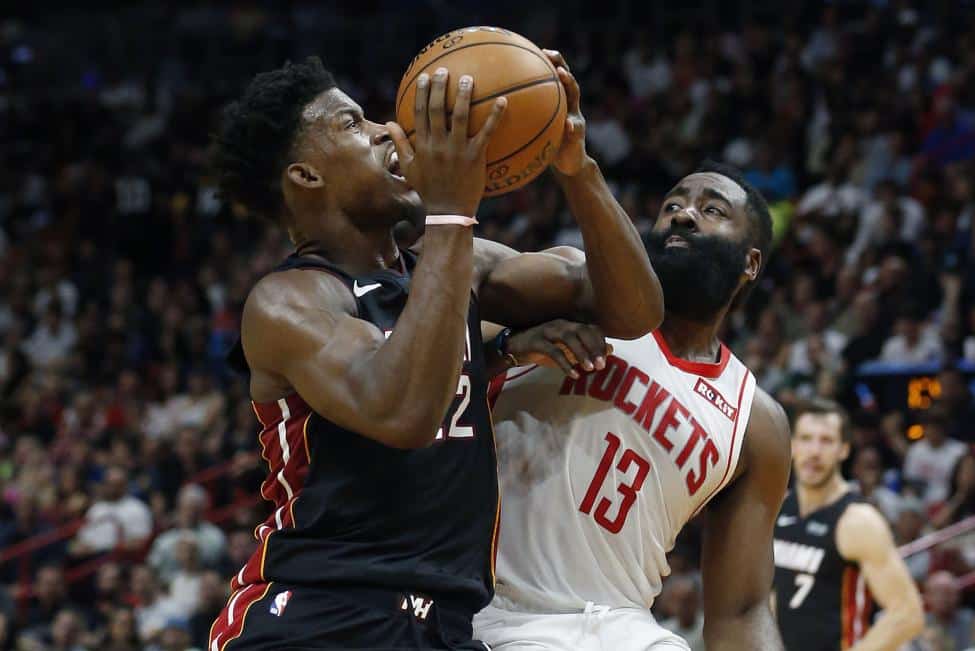