After securing a much-needed victory against the Golden State Warriors, the Miami Heat looked to end their road trip on a high note as they faced the Utah Jazz. In their last game, the Heat won an intense game against the Jazz in a late December contest. Heading into this game, Miami looked to propel themselves up the rankings in the Eastern Conference standings.

Donovan Mitchell and Rudy Gobert got Utah going with a basket each, while Jimmy Butler and Kendrick Nunn put Miami on the board with a layup and a breakaway dunk. After a pair of baskets from Bojan Bogdanovic for Utah, Butler and Nunn would tie the game at 8, after making a layup each. Butler and Adebayo looked to take the lead for Miami, but a trio of three-pointers from Mitchell, Bogdanovic, and Royce O’Neale put Utah ahead. Jae Crowder entered the game for Miami to a standing ovation from the Utah crowd, for his time playing for them. Afterwards, Crowder knocked down a three-pointer and a layup for Miami, only for Mitchell and Jordan Clarkson to make a basket each to keep Utah ahead 21 to 18. The Heat closed the first quarter on a ten to two run, giving them a 28 to 25 lead.

Clarkson and Georges Niang led the way on offense for Utah to start the second quarter, while Goran Dragic and Duncan Robinson made some three-point plays to keep Miami ahead 39 to 36. After another basket from Clarkson, Butler and Adebayo converted a bucket each. After a surprising block from Heat rookie Kendrick Nunn on Gobert, Mitchell converted a layup and a three-pointer to bring Utah within a point shy of taking Miami’s lead, who were ahead 44 to 43. Miami ended the second quarter on a nine to four run, giving them a 52 to 48 lead.

In the third quarter, Utah wasted no time getting their offense rolling as Gobert, Bogdanovic, and O’Neale made several baskets, while Butler, Nunn, and Adebayo, who delivered a poster jam on Gobert, kept Miami in front with a lead of 65 to 61. Gobert and Mitchell would tie the game at 65 for Utah, which led to a fourteen to four run for Utah, until Crowder ended the run with a three-pointer for Miami. Jazz rookie Tony Bradley entered the game and
made two free throws and a put back, while Dragic knocked down a basket to end the third quarter with Utah leading 79 to 74.

As the fourth quarter commenced, Robinson made two three-pointers to get Miami back in the lead, but baskets from Emmanuel Mudiay, Bradley, and Niang would put Utah further ahead. After a three-pointer and two free throws from Crowder, the Jazz continued scoring as Mudiay and Clarkson started to take over on the offense, giving Utah a 96 to 85 lead. The Heat continued to rally back in the game and take the lead away from Utah, who kept knocking down baskets in response to Miami’s offense. With Utah leading 103 to 96, they closed the game on a fourteen to six run, splitting the regular season series with a score of 116 to 101.

And so, the Heat’s nine-day, five-game road trip concludes and can now turn their attention to the festivities of All-Star weekend in Chicago, where several Heat players, including Butler and Adebayo, will be participating in several events before Sunday’s attraction.

For the Heat, Jimmy Butler had 25 points, Duncan Robinson made 18 points, Jae Crowder with 15 points, Goran Dragic had 13 points, and Kendrick Nunn with 12 points.

For the Jazz, Donovan Mitchell led the way with 26 points, Bojan Bogdanovic had 22 points, Jordan Clarkson made 21 points, and Rudy Gobert with a double-double of 16 points and 20 rebounds. 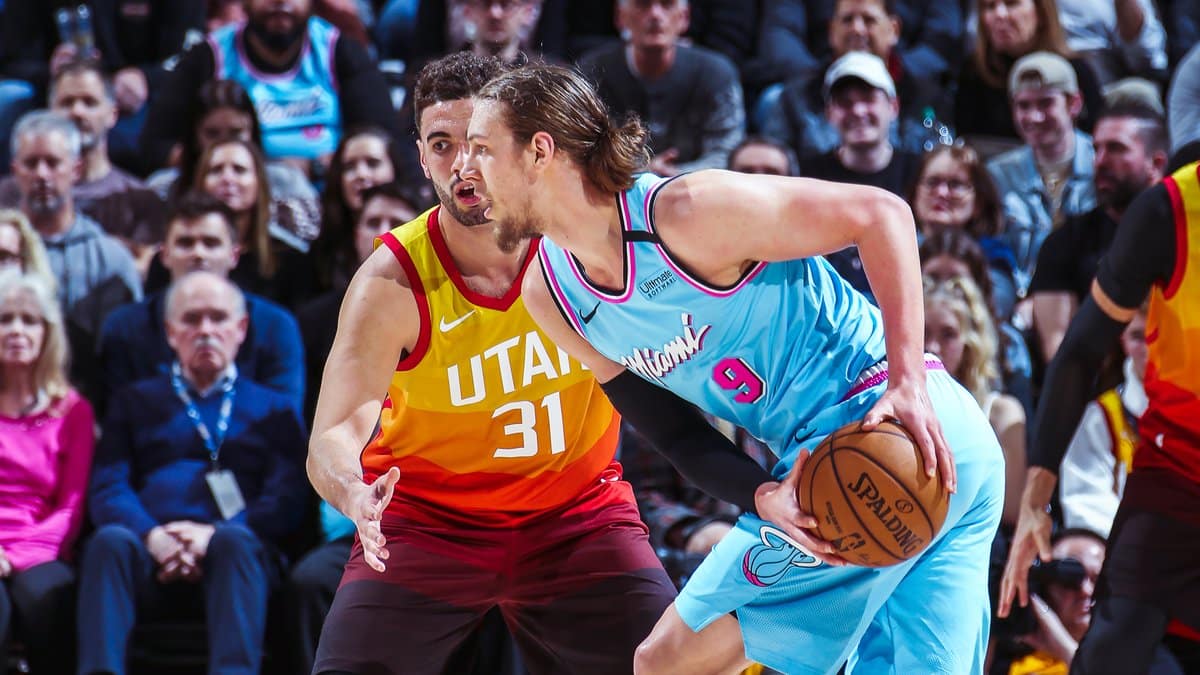