Skip to content
You are here
Home > US Sports > NBA > Iguodala, Heat, Triumph Over Warriors 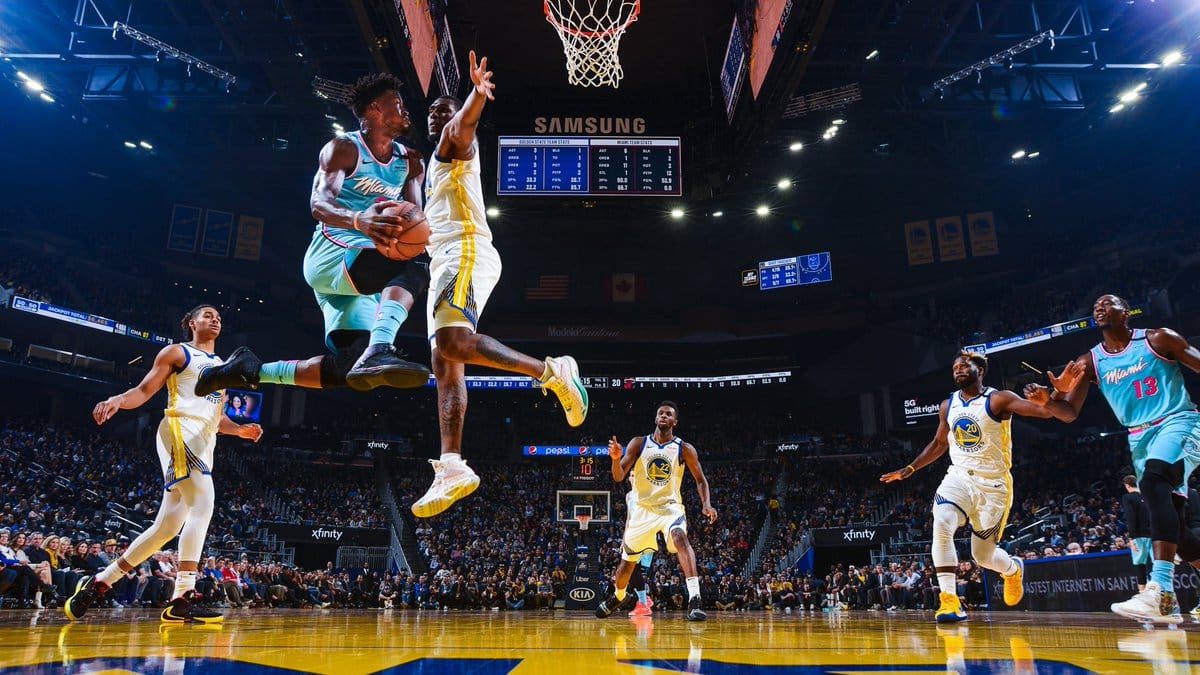 The Miami Heat’s road trip started off with a three-game skid, but they looked to turn things around as they visited the Chase Center for the first time to face the Golden State Warriors. In their last game, the Heat won against the Warriors at the American Airlines Arena. Heading into this game, Jimmy Butler returned back to the lineup for Miami, after sitting out with a sprained right shoulder.

Newly acquired Heat forward Jae Crowder made two sets of two free throws to start the second quarter for Miami, while Allen Smailagic, Poole, and Eric Paschall made free throws of their own for Golden State. After a pair of three-pointers from Crowder and a layup from Kelly Olynyk, Miami led 37 to 27. The Heat went on a twenty-six to four run, but a technical free throw from newly acquired Warriors forward Andrew Wiggins ended the run. Golden State went on a thirteen to seven run to end the second quarter, with Miami still ahead 62 to 43.

In the third quarter, Robinson threw a layup, followed by a dunk from Derrick Jones Jr. and three-pointer from Kendrick Nunn to get Miami going, while Golden State saw Lee make a three-pointer and Wiggins making both free throws. The Warriors went on a nineteen to two run before Olynyk made a basket to end the run for Miami. Lee and Wiggins each made their three-point plays for the Warriors, only for the Heat to respond with layups from Butler and Goran Dragic. By the end of the third quarter, Miami led 83 to 75.

As the fourth quarter commenced, Olynyk and Iguodala knocked down a basket each to keep Miami in the lead, while Paschall and Chriss took over on offense for the Warriors. After a three-pointer each from Robinson and Crowder, Miami led 93 to 80. Dragic, Crowder, and Olynyk continued making baskets for the Heat, but Lee and Chriss continued scoring to keep the Warriors in the game. As Miami led 105 to 91, Golden State went on a ten to eight run, but the Heat held on with a 113 to 101 victory.

The Heat snapped a three-game skid and did so in convincing fashion. A much needed boost in the return of Jimmy Butler, plus offensive production from Duncan Robinson, Bam Adebayo, and Jae Crowder proved much of a difference for the Heat. Miami’s defense looked very solid, despite not using any of the zone defense, which the Heat have used in their recent string of games. A strong outing for the Heat in their inaugural visit to the Chase Center in San Francisco.

For the Warriors, Damion Lee led the way with 26 points, Andrew Wiggins made 18 points, Marquese Chriss had 17 points, and Jordan Poole with 12 points.

The Heat close out their road trip out west as they face the Utah Jazz. Game starts Wednesday at 9pm and will be on Sun Sports.