The Miami Heat looked to cap off their four game home stand on a high note as they hosted the Los Angeles Lakers. In their last game, the Lakers dominated the Heat at the Staples Center. Heading into this game, Miami would be without Goran Dragic and Justise Winslow, while the Lakers were without DeMarcus Cousins.

Meyers Leonard put Miami on the board with a three-pointer, followed by a basket from Jimmy Butler, only for the Lakers to tie the game in similar fashion with JaVale McGee and Danny Green. After a hook shot from McGee, rookie Kendrick Nunn delivered an explosive dunk for the Heat. With the game tied at 14, Jimmy Butler put the Heat ahead, only for Anthony Davis to the tie game for the Lakers. Derrick Jones Jr. would make a three-pointer and a breakaway dunk for the Heat, while LeBron James got himself going with some baskets of his own. With Miami leading 24 to 21, the Lakers went on a nine to five run to close the second quarter, leading 30 to 29.

Miami jumped out ahead in the second quarter as Bam Adebayo, Kendrick Nunn, and Kelly Olynyk made their baskets, while LeBron and Avery Bradley tried to cut into the lead. After an emphatic dunk from Jones Jr., the Heat led 37 to 32. Miami were still on their scoring run before LeBron and Davis made three-point play each to end the run. With Miami leading 41 to 38, they went on a fifteen to four run, before Kentavious Caldwell-Pope ended the run with a put-back for the Lakers. By halftime, Miami led 59 to 51.

In the third quarter, Miami looked to capitalize on their lead with an alley-oop from Nunn and free throws from Butler, while LeBron, Caldwell-Pope, and Davis continued scoring for the Lakers. LeBron would make a three-pointer to tie the game at 65, leading to the Lakers to go on a fourteen to two run. With the Lakers leading 82 to 77, the Heat went on an eight to six run to close the third quarter as the Lakers led 88 to 85.

The Heat fought diligently and arduously through the contest, but the Lakers’ size and securing defensive rebounds proved to be the difference maker. The Lakers secured 35 defensive rebounds to Miami’s 29. A notable highlight for the Heat were their turnovers. Miami committed 8 turnovers to the Lakers’ 19. The Heat’s 11 game win streak at home comes to a halt at the hands of the Lakers. Miami shot 45.9 percent from the field, 78.6 percent from the free throw line, and 30 percent from behind the three-point line.

For the Lakers, Kentavious Caldwell-Pope made 15 points, Avery Bradley with 10 points, plus LeBron James and Anthony Davis were in double-double figures. LeBron had 28 points and 12 assists. Davis with 33 points and 10 rebounds.

For the Heat, Jimmy Butler had 23 points, Derrick Jones Jr. with 17 points, Kendrick Nunn made 16 points, Kelly Olynyk had 15 points, and Bam Adebayo with a double-double of 12 points and 12 rebounds.

The Heat will be back in action tomorrow as they head out to face the Dallas Mavericks. Game starts tomorrow at 8:30pm and will be televised on Sun Sports. 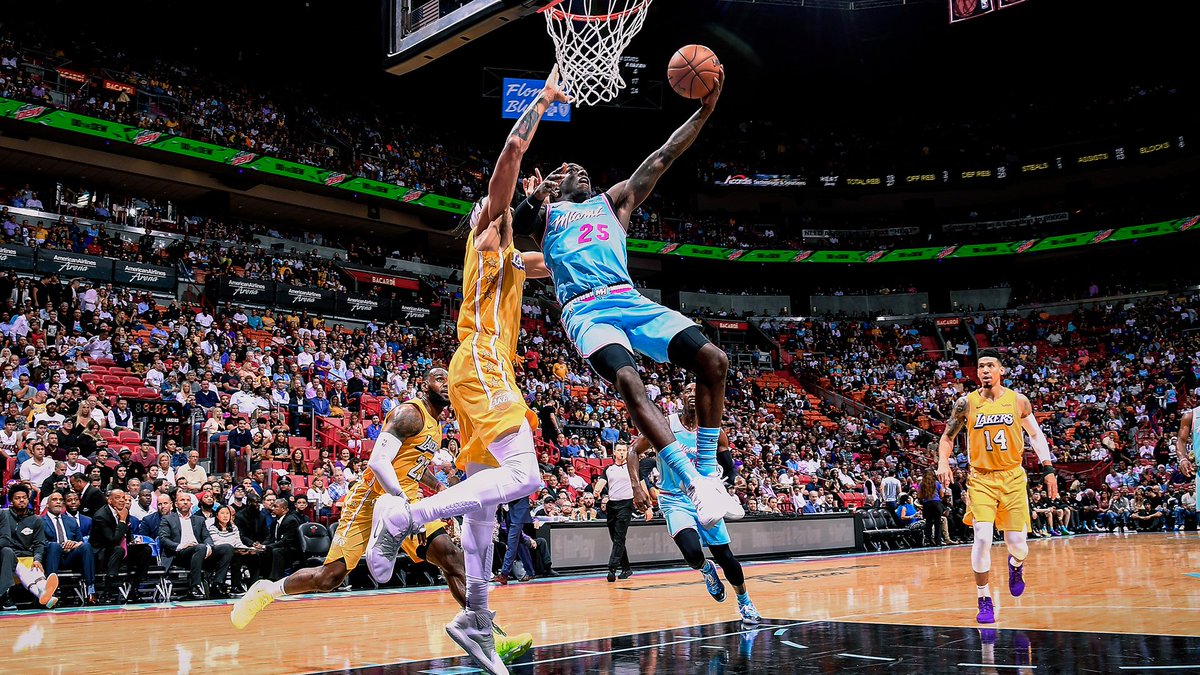