After winning an overtime thriller against the Chicago Bulls last Sunday, the Miami Heat continued their home stand as they faced the Atlanta Hawks for their Star Wars night promotion. In their last game, the Heat were victorious against the Hawks in a 106 to 97 contest on Halloween night. Heading into this game, the Heat were once again without Goran Dragic, while the Hawks were without John Collins, who is serving a 25 game suspension.

Miami went on a twenty-five to ten run, led by Kendrick Nunn, Duncan Robinson and Bam Adebayo, before three-pointers from DeAndre Hunter and Alex Len ended the run for the Hawks. With Miami leading 25 to 16, the Hawks closed the first quarter on a fourteen to eleven run, with the Heat leading 36 to 30.

In the third quarter, both teams traded the lead until Nunn and Butler made a few layups to put the Heat ahead 80 to 74. The Hawks closed the third quarter on a twenty-two to thirteen run, led by Hunter and Parker, leading 96 to 93 over Miami.

As the fourth quarter commenced, DeAndre’ Bembry and Allen Crabbe knocked down a layup and a three-pointer respectively to put the Hawks further ahead 101 to 93. Butler, Nunn, and Robinson took over on the offensive end for Miami as they look to take back the lead before Hunter delivered a dunk and a layup to put the Hawks ahead 111 to 106. The Heat would tie the game at 111 with a layup from Nunn and a three-pointer from Robinson, only for the Hawks to breakaway once more with baskets from Parker, Young, and Len as the Hawks led 117 to 111. In the closing moments of the game, Robinson made a quick three-pointer for Miami, followed by a clutch block from Jones Jr., and a tying three-pointer from Butler. The Heat looked to Butler to win them the game, but he would miss the would-be game winner as the contest went to overtime.

Miami jumped out of the gate in overtime, going on a sixteen to nothing run before Cam Reddish ended the run with a layup for the Hawks. After another basket from Adebayo, Reddish would make another layup for the Hawks as Miami would go on to win 135 to 121.

Another dramatic comeback to tie the game leads to another overtime victory for Miami. The Heat went through some struggles in the contest, but they held it together with clutch offense and defense, which gave them a second wind. Much like Tyler Herro against the Bulls on Sunday, it was a big night for fellow rookie Kendrick Nunn, who was knocking down basket after basket, but he wasn’t the only player making big contributions. Duncan Robinson was impressive from beyond the arc, and now ties with Brian Shaw and Mario Chalmers for the most three-pointers made with 10 in Heat history. It was also a big night for Bam Adebayo, who made his first triple-double. The Heat remain undefeated on their home court, now with 11 wins in a row. Miami are also undefeated in overtime, having won 4 in a row.

For the Hawks, DeAndre Hunter had 28 points, Trae Young made 21 points, Jabari Parker with 16 points, Cam Reddish had 14 points, and Vince Carter with 12 points.

Miami look to end their four game home stand as they face LeBron James, Anthony Davis, and the Western Conference leading Los Angeles Lakers. Game starts at 7pm and will be televised on Sun Sports and on ESPN. 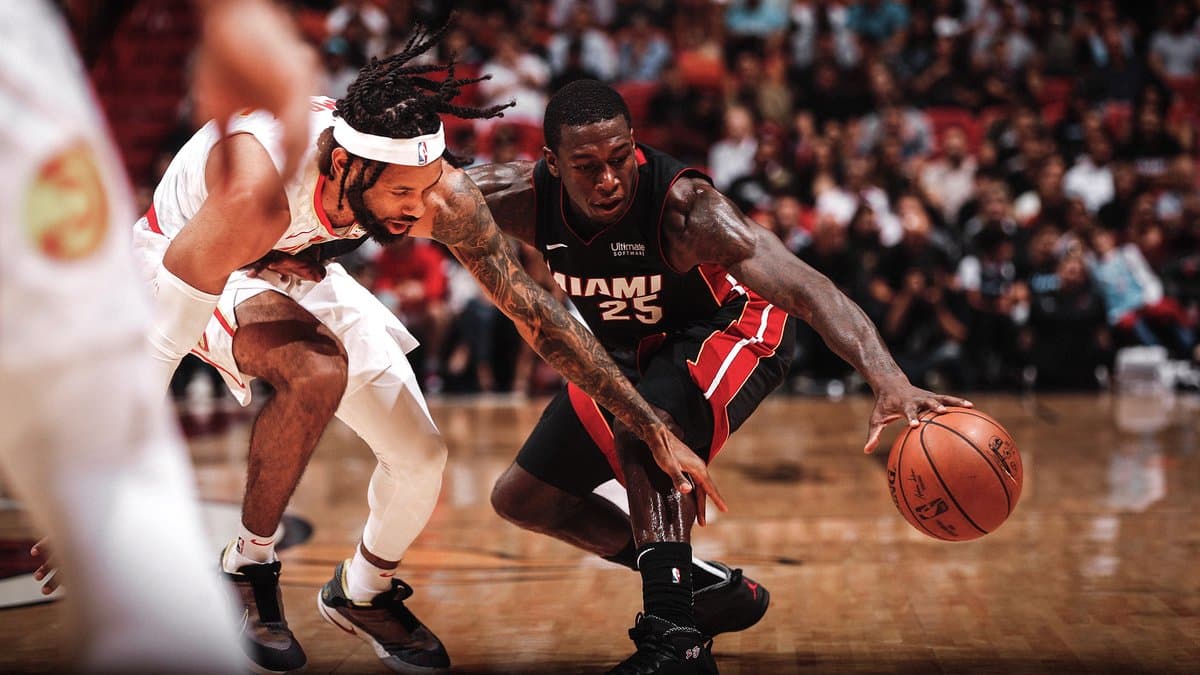