After winning an overtime thriller against the Milwaukee Bucks yesterday evening, the Miami Heat looked to play spoiler to yet another opening night affair, this time against the Minnesota Timberwolves. The Heat would be without Derrick Jones Jr., who sits out with a left leg and groin injury.

Bam Adebayo and Justise Winslow got Miami on the board with a basket and a layup, only for Karl-Anthony Towns and Andrew Wiggins to answer back with a layup each for Minnesota. After an exchange of three-pointers from rookie Tyler Herro and Robert Covington for the Heat and the Timberwolves respectively, both teams would be neck and neck with their scoring, with Miami leading 14 to 13. Miami and Minnesota were still trading the lead among each other, before Towns knocked down a three-pointer and a layup to give Minnesota a 22 to 19 lead. The Wolves closed the first quarter on a twenty-one to six run, leading 36 to 23.

Undrafted rookie Kendrick Nunn started the second quarter with a three-pointer for Miami, followed by two free throws from fellow undrafted rookie Chris Silva, while Minnesota responded with a layup each from Noah Vonleh and Josh Okogie. After a driving layup from Goran Dragic, the Wolves continued their offense with baskets from Jake Layman and Vonleh. With Minnesota leading 45 to 37, Duncan Robinson came off the bench for Miami, knocking down a few three-pointers and even getting to the basket at will, but the Wolves’ bench were still keeping Minnesota in the lead. With Minnesota ahead 51 to 39, the Heat closed the second quarter on an eighteen to two run, leading 57 to 55.

Adebayo and Nunn led Miami’s offense in the third quarter, while increasing their lead over Minnesota.With the Heat leading 81 to 74, they were on an eleven to three run before a three-pointer from Towns stopped the run altogether. By the end of the third quarter, Miami led 84 to 77.

As the fourth quarter commenced, Minnesota began to rally back as Josh Ogokie, Layman, and Vonleh took over on the offensive end, while Nunn and Winslow tried to keep Miami’s lead in tact. With the Heat leading 94 to 90, the Wolves went on a twenty-two to seven run, led by Wiggins, who came off the bench and knock down a trio of three-pointers and turning the tide for Minnesota. As the Wolves led 110 to 101, Miami tried to rally back in the game with three-pointers, but costly turnovers and time would work against them as the Minnesota would go on to win 116 to 109.

The Heat rallied and took over for much of the second half, but Minnesota would bounce back thanks to Andrew Wiggins. Three glaring problems that hindered Miami were turnovers, getting second chance points and missing key free throws down the stretch. Miami committed 21 turnovers, despite being 10 for 15 from the free throw line. As for second chance points, Miami rarely had any opportunity to get any.

For the Heat, Kendrick Nunn had 25 points, Duncan Robinson made 21 points, Justise Winslow with 20 points, and Bam Adebayo with 13 points.

For the Timberwolves, Andrew Wiggins made 25 points, Jeff Teague had 21 points, Shabazz Napier with 12 points, plus Karl-Anthony Towns and Robert Covington were in double-double figures. Towns had 23 points and 11 rebounds. Covington made 11 points and 10 rebounds.

The Miami Heat return back home, where Jimmy Butler will make his Heat debut against the Atlanta Hawks. Game starts Tuesday at 7:30pm and will be televised locally on Sun Sports. 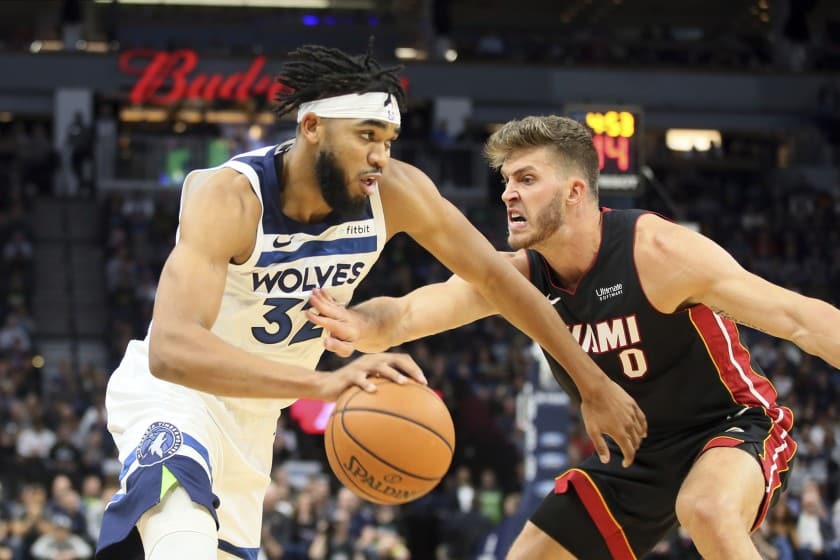