After opening their 32nd season with a win against the Memphis Grizzlies on Wednesday, the Miami Heat embarked on the road as they visited the Fiserv Forum to face the Milwaukee Bucks for their opening night game. For the second time, the Heat would be without Jimmy Butler, who became a father for the first time, welcoming a baby girl.

Rookie Tyler Herro got Miami on the board early with a bucket, while Wesley Matthews and Eric Bledsoe got Milwaukee going with a three-pointer and a free throw. After a scary moment where Justise Winslow was hurt after Giannis Antetokounmpo fell on top of him, Khris Middleton fired off a basket and a pair of three-pointers for the Bucks, while rookie Kendrick Nunn and Meyers Leonard answered back with a floater and a layup, plus a three pointer. With the Bucks leading 12 to 9, Middleton knocked down another three-pointer, followed by a layup from Antetokounmpo, but Miami responded with baskets from Nunn and Bam Adebayo. With Milwaukee ahead 24 to 17, the Heat finished the first quarter on a twelve to nine run, with the Bucks ahead 33 to 29.

Miami went on a fifteen to five run, led by Derrick Jones Jr., Goran Dragic, and Kelly Olynyk, before George Hill and Matthews ended the run with a three-pointer each for Milwaukee. After a three-pointer from Dragic, the Bucks answered with a three of their own from Kyle Korver. With the Bucks leading 47 to 43, the threes continued falling as Milwaukee broke their lead wide open against Miami. By halftime, the Bucks were ahead 70 to 53.

After going through a rough first half, the Heat went on a nineteen to eight run, led by Nunn, Herro, and Leonard, all the while utilizing their defense to claw their way back into the game. With Milwaukee leading 84 to 72, the Heat closed the third quarter on a ten to nine run, with the Bucks still ahead 93 to 82.

As the fourth quarter commenced, Miami continued on their run from the third quarter, increasing it to eighteen points over Milwaukee’s five, before Antetokounmpo and Korver responded with a few baskets. With Milwaukee leading 103 to 97, the Heat continued chipping away at the Bucks’ lead and eventually took it back after a pair of three-pointers from Olynyk and a put back from Winslow. Derrick Jones Jr. would leave the game with a left leg injury and strain to his groin. With Miami leading 116 to 108, the Heat look more than poised  to win the game, but missing crucial free throws and a Bucks comeback down the stretch to tie the game would send them into overtime, with the game at 121 each.

In overtime, Antetokounmpo made a layup to put Milwaukee in front, but Adebayo made two free throws to tie the game at 123, and two more to take the lead. After two more free throws and a basket from Dragic, Middleton knocked down a three-pointer to keep Milwaukee in the game. Though the Heat missed potential free throws to increase their lead, it would be a game-saving block from Adebayo that kept Miami from going under. Dragic would make two free throws to put the game away for Miami, en route to a 131 to 126 win.

What a game this was from beginning to end. The Miami Heat were down 21 by the end of the first half and came back rallying in the 2nd half before Giannis Antetokounmpo sent the game into overtime. There were times that the Heat should’ve taken advantage of the free throws to increase their lead, but it was their defense that helped them get a much needed win against a top team in the Eastern Conference.

For the Milwaukee Bucks, Khris Middleton made 25 points, Wesley Matthews and Kyle Korver with 14 points each, Brook Lopez had 12 points, Ersan Ilyasova made 11 points, Eric Bledsoe with 10 points, and Giannis Antetokounmpo with a double-double of 29 points and 17 rebounds.

The Heat finish their weekend road trip as they visit the Target Center to face the Minnesota Timberwolves. Game starts Sunday at 7pm and will be televised locally on Sun Sports. 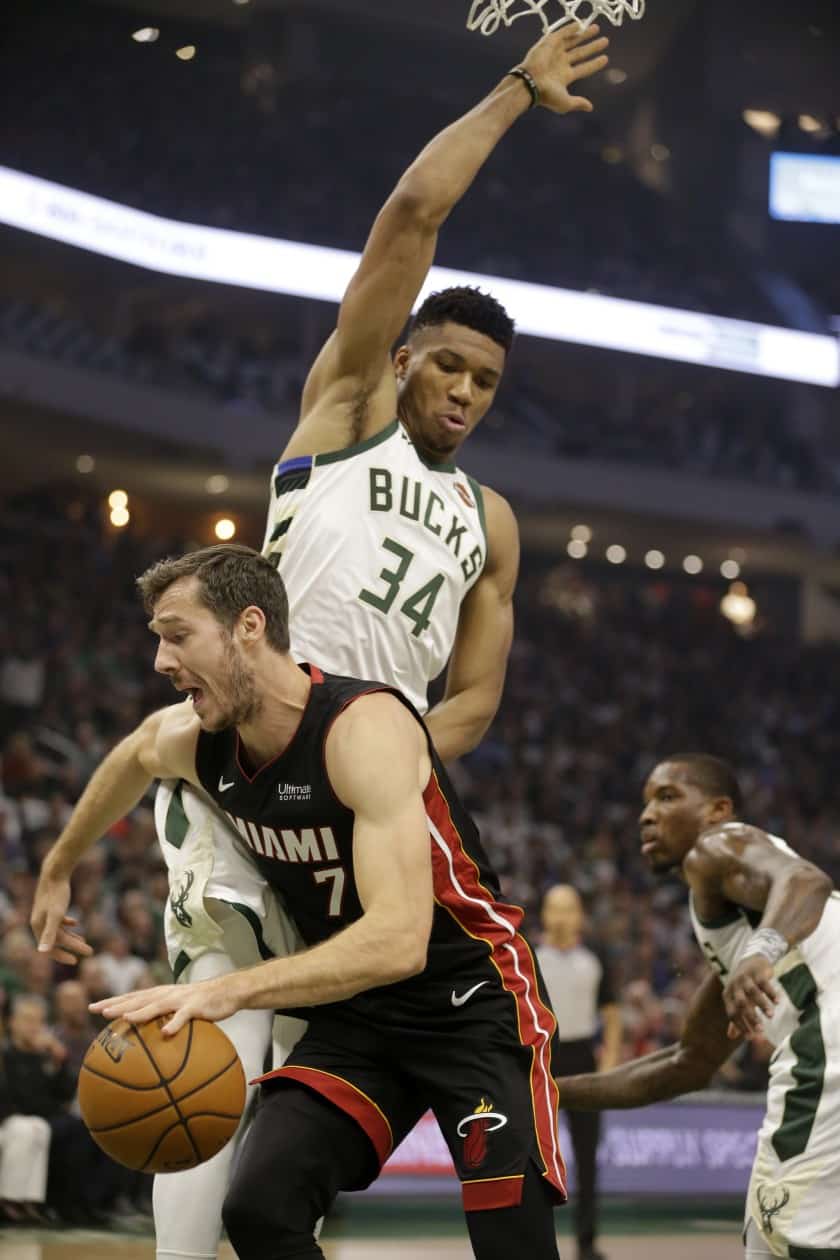