The Miami Heat hosted the Utah Jazz in the American Airlines Arena in what was a hard-fought contest where defense was on full display. The Heat had thwarted the New York Knicks last Friday and looked to do the same to the Jazz.

Rudy Gobert and Joe Ingles got Utah on the board with an alley-oop and a three-pointer respectively, while Meyers Leonard tied the game for Miami with a layup and a three-pointer. After rookie Kendrick Nunn and Bam Adebayo got themselves going for the Heat, the Jazz answered back with three-pointers from Donovan Mitchell and Joe Ingles as Utah tied the game at 11. Ingles and Bojan Bogdanovic put Utah out in front, only for Jimmy Butler and Goran Dragic to take it away for the Heat, who were leading 19 to 18 as they went on an eight to nothing run. The Heat increased their scoring run, making sixteen to Utah’s four points before Emmanuel Mudiay and Jeff Green ended the run for the Jazz. By the end of the first quarter, Miami led 32 to 28.

The Jazz would go on a run of their own in the second quarter, scoring eleven unanswered points before a response from Bam Adebayo and rookie Tyler Herro. With the game tied at 37, the Heat went on a thirteen to four run, but Mudiay and Mitchell ended the run for Utah as Miami led 49 to 46. Derrick Jones Jr. took Gobert to the lane and delivered a poster dunk on him for Miami, only for Ingles to knock down a pair of three-pointers for Utah. After a layup from Nunn, Miami led 53 to 52 by halftime.

In the third quarter, Leonard and Nunn made a layup and a basket for Miami respectively, while Mitchell and Ingles made a three-point play each for Utah. With Miami leading 63 to 62, Bogdanovic picked up the offensive load for Utah, while contending against Butler, Nunn, and Jones Jr. With the Jazz leading 70 to 68, the Jazz were on a thirteen to five run, but Adebayo and Butler ended the run for Miami, leading to a buzzer beater from Dragic to end the third quarter as Utah led 81 to 76.

As the fourth quarter commenced, Adebayo delivered two crushing dunks for Miami, forcing the Jazz to call for a quick timeout. With Utah leading 81 to 80, the Heat went on a nineteen to four run, giving them a 95 to 85 lead over Utah. After a layup each from Dragic and Herro for Miami, the Jazz answered back with baskets from Royce O’Neale and Ingles as the Heat led 99 to 95. Herro would make a layup and a bucket for the Heat, only for Utah to respond with a three-pointer from Ingles and a dunk from Gobert. After two free throws from Duncan Robinson, Miami led 105 to 100. Gobert would make two dunks for Utah, but it would be Butler’s two free throws to seal the victory for Miami in an arduous 107 to 104 contest.

The defense was on full display for both teams, but it was Miami’s smothering tactics in the fourth quarter that made the difference down the stretch. There were blocks, steals, and a lot of roughhousing between the two teams, but the Heat managed to pull through.

For the Jazz, Joe Ingles led the way with a season high 27 points, Bojan Bogdanovic made 19 points, Donovan Mitchell had 13 points, Emmanuel Mudiay with 12 points, and Rudy Gobert with a double-double of 18 points and 20 rebounds.

For the Heat, Jimmy Butler had 20 points, Tyler Herro made 17 points, Goran Dragic with 15 points, plus Bam Adebayo and Meyers Leonard were in double-double figures. Adebayo with 18 points and 12 rebounds. Leonard with 11 points and 10 rebounds.

The Heat will enjoy another holiday break before their tilt with the Indiana Pacers. Game starts on Friday at 8pm and will be on Sun Sports. 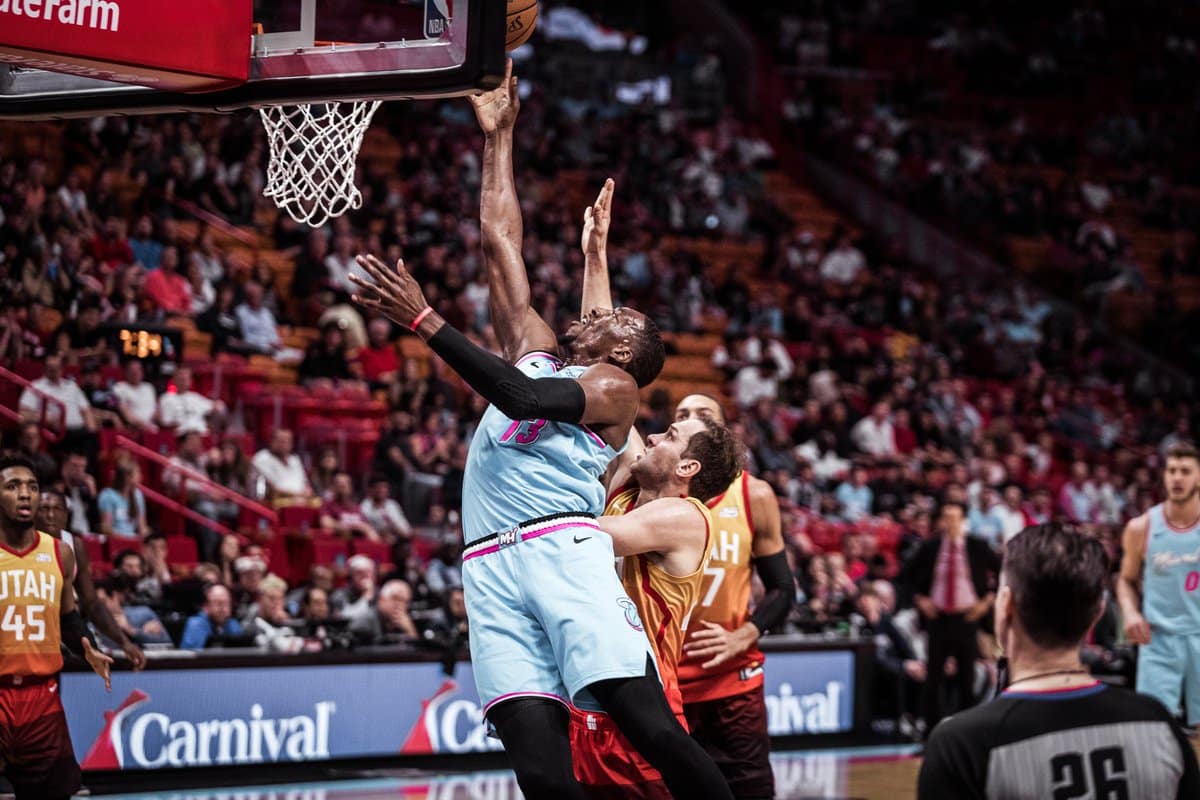