The Miami Heat continued their four game home stand as they faced the Chicago Bulls. In their last game, the Heat won against the Bulls in a 116-108 contest, which saw a homecoming of sorts for Jimmy Butler and rookie Kendrick Nunn. Heading into this game, the Heat would still be without Goran Dragic, Justise Winslow, and KZ Okpala, both of whom sat out with injuries.

Zach LaVine and Lauri Markkanen got Chicago on the board with a basket and a three-pointer respectively, while Bam Adebayo and Duncan Robinson would do the same for Miami, making two free throws and a three-pointer. The Bulls jumped ahead with baskets from Markkanen, Wendell Carter Jr., and Kris Dunn, giving them a 10 to 5 lead. After Nunn and Adebayo made a reverse layup each for Miami, Chicago answered back with baskets from Tomas Satoransky and Dunn. After a layup from Adebayo and a free throw each from Butler and Chris Silva, the Bulls continued scoring with a free throw from Carter Jr., plus a three-point play each from Thaddeus Young and rookie Colby White. With Chicago leading 20 to 11, Butler made the last five points for Miami, while Denzel Valentine and Young did the same for Chicago with a three-pointer and hook shot respectively to end the first quarter, leading 25 to 16.

Rookie Tyler Herro and Nunn opened the second quarter with a basket each, followed by a slam dunk from Derrick Jones Jr. for Miami, while Chicago saw a basket from Valentine, a three-pointer fromYoung, and free throws from White. The Heat would go on an eight to nothing run before a layup from Dunn ended it. After a three-pointer from Herro, LaVine made a layup for Chicago, putting them ahead 36 to 35. The Bulls went on a fourteen to ten run to close the second quarter, giving them a 49 to 47 lead.

In the third quarter, Markkanen and Dunn picked up the offense for Chicago, while Adebayo and Robinson did the same for Miami. With Chicago leading 62 to 59, the Heat went on a fifteen to eleven run to close the third quarter, giving them a 74 to 73.

As the fourth quarter commenced, Chicago would push ahead of Miami with three-pointers from Young and Valentine, followed by free throws from Shaquille Harrison, while Butler knocked down free throws to keep Miami in the game. With Chicago leading 81 to 80, Dunn knocked down two free throws for the Bulls, while Herro made a layup to keep Miami close to Chicago’s lead. After a three-pointer from White, the Bulls were ahead 86 to 82. Miami continued to draw close within Chicago’s lead as Adebayo, Jones Jr., and Butler were making dunks and free throws, but Dunn, LaVine, and Markkanen kept scoring for the Bulls. After a three-point play from  Adebayo, the game was tied at 92. In the closing moments of regulation play, the Bulls pulled ahead with a free throw from LaVine and a layup from Markkanen, but it would be Herro to rise to the occasion and not only make a layup, but also knock down a three-pointer to put Miami ahead. LaVine would tie the game at 97 as the game headed to overtime.

In Overtime, LaVine knocked down a basket for the Bulls, while Nunn got to the rim with a layup for Miami. Adebayo walked gingerly after getting hit, but would later return back to the game for the Heat. The threes were falling once more as Dunn and White knocked down a three-pointer each for Chicago, while Herro made a trio of his own, putting Miami ahead 108 to 105. Herro would be fouled by White, sending him to the free throw line to knock down both free throws. The Heat would go on to win 110 to 105.

This was a highly intense, drama-filled, down to the wire game for the Heat. Tyler Herro lived up to his last name, providing the Heat with clutch three-pointers in the late stages of regulation play and in overtime. Jimmy Butler also contributed for Miami, getting to the free throw line to keep them in the game. It was an arduously earned victory for Miami, who shot 41.6 percent from the field, 79.5 from the free throw line, and 31.4 percent from the three-point line. The Heat remain undefeated on their home court, having won 10 games, as well as being undefeated in overtime, winning three in a row.

For the Bulls, Lauri Markkanen had 22 points, Zach LaVine made 18 points, Kris Dunn with 16 points, Thaddeus Young had 12 points, Denzel Valentine and Colby White made 11 points each.

For the Heat, Tyler Herro led the way with 27 points, Jimmy Butler made 23 points, Kendrick Nunn with 18 points, and Bam Adebayo with a double-double of 21 points and 13 rebounds.

The Heat continue their home stand as they face the Atlanta Hawks. Game starts Tuesday at 8pm and will be televised on Sun Sports. 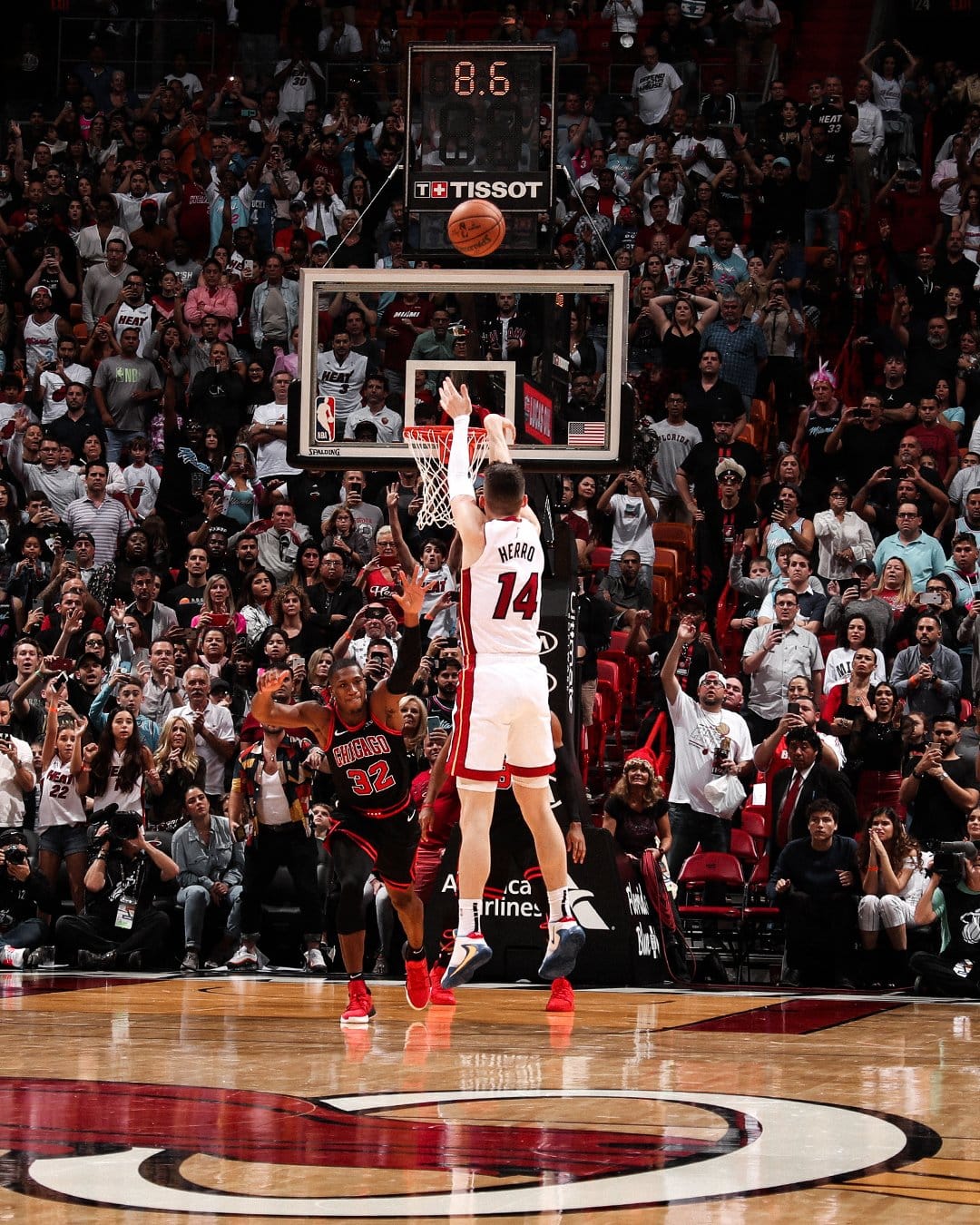