The Masters was back in its normal April slot after 2020’s version took place just five months ago in November, and this time around 10,000 patrons were also allowed into the grounds of Augusta, so that was very good as well, we missed their roars in November. Let’s see how the opening two rounds did and who got themselves into position to win at the weekend and who went home…

On a day were only nineteen of the eighty-eight players posted par or better, and only twelve managed red figures, three men managed to break seventy. Two of those were Brian Harman and Hideki Matsuyama, who both shot superb 69’s, but they were overshadowed by an immense round of golf by Justin Rose, with the Englishman shooting an extraordinary 65 to lead by four shots going into Round Two.

Justin Rose was two over par after seven holes but then went nine under in the remaining eleven to blow the rest of the field away, it really was like he was playing on a different course altogether, most players had struggled to make par on a course that was playing firm and fast, the greens, In particular, were lethally quick and players were finding it difficult to control the ball on them.

Another highlight of Round One was Tommy Fleetwood’s hole in one on that famous 16th hole, he took dead aim at the flag and saw the ball find the bottom of the cup and cued joyous scenes amongst players and fans alike, it was a good moment for the Englishman and changed his round from not so good to not so bad as he ended on two over and in a tie for 30th.

Lee Westwood had been playing well recently but he didn’t have such a good day, shooting a six over 78 in his first-round leaving him with much to do on Day Two, whilst players like Rory McIlroy and Bryson DeChambeau have work to do as well after they both carded 76’s to end four over after round one.

And what of defending champion Dustin Johnson, well he only bogeyed four of his 72 holes when he won his first green jacket in November but it was a much different course this time round and DJ ended up carding a two-over 74, including a double bogey on his last hole, but he is only five back from second place so most certainly not out of it by any means.

But, Justin Rose will go into round two with a healthy lead, all the others will be hoping he comes back to them on Day Two although with rain and storms predicted on Friday and Saturday, it may soften the course up a bit which could help with scoring, we shall see.

Here is the leader board after Round One showing all those who managed to make par or better, there weren’t many, which makes Rose’s 65 even more special… 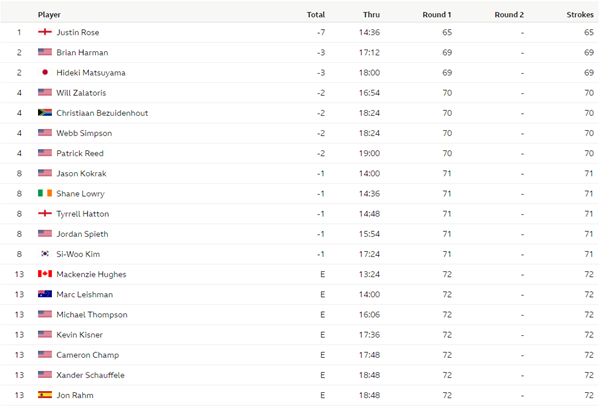 Day Two saw much better scoring as many more players managed to shot scores in the sixty’s, although Rose was not to be one of those as he had a much tougher time of it second time round but did manage a level-par 72 to remain top of the leader board on seven under par, although he has quite a group of players forming a queue behind him.

Harman and Matsuyama backed up their 69s from Round One with another under par round, Harman shot another 69 to be one shot back from Rose on six under whilst Matsuyama 71 sees him three back and in a tie for sixth, but they are joined by a pretty familiar face in Jordan Spieth, whose 68 in Round Two sees him two back in a tie for fourth, he won this on 2015 and should have won it the year after too, can he grab his second green jacket and continue his rise back to form.

Youngster Will Zalatoris is in a tie for second after he posted a 68 on Day Two, whilst major champions Justin Thomas and Collin Morikawa are in striking distance after Round Two after decent second round’s, but the best second rounds came from Tony Finau and Bernd Wiesberger, who shot 66s to get them right into contention for the weekend.

Now DeChambeau had a lot of work to do to even make the weekend after a very out of sorts 76 on Day One, and he did much better on Friday by shooting a five-under-par 67 to see him six shots back at the halfway stage, so right back in the tournament, so that was a very good recovery from him indeed, but other big-name players who were in a similar predicament didn’t fare so well.

2017 champion Sergio Garcia missed the cut as did Daniel Berger, Brooks Koepka (although he did well just to make the tournament after knee surgery just three weeks ago), Lee Westwood and Rory McIlroy, who has to wait yet another year to try and complete that elusive career grand slam, and last years champion DJ also missed the cut, meaning he will not defend his title from five months ago. That was probably one of the headlines on Day Two.

But it’s Rose who leads the way at the halfway stage but the moving day will be very interesting that is for sure!!! Below are all players under par after two rounds of the 2021 Masters, it’s still a select few on a tough course… 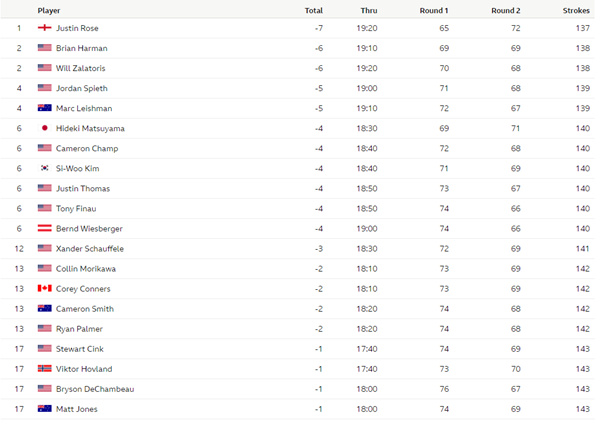 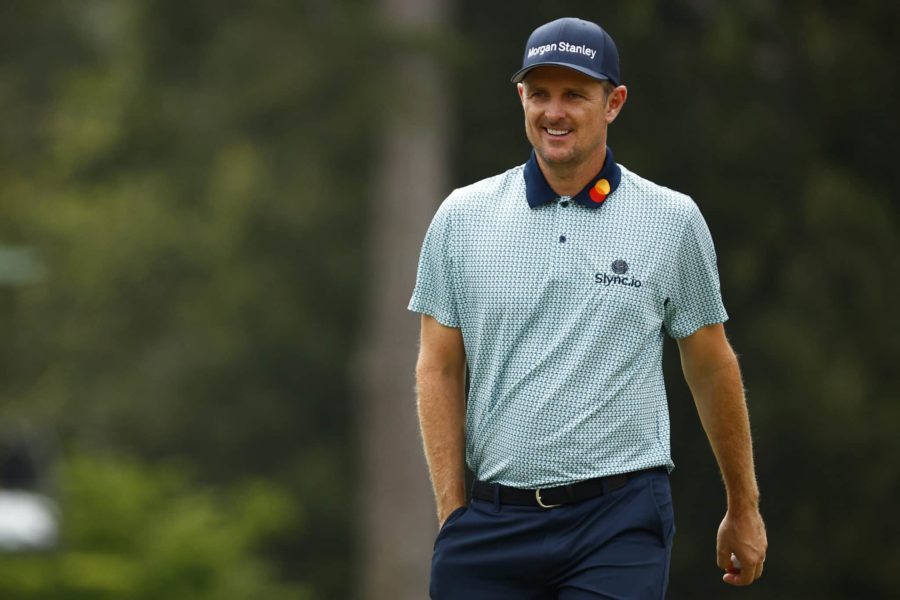