From February 1 to November 19 of 2019, Carmelo Anthony was out of the league.

Carmelo Anthony was raised in Red Hook, Brooklyn. There he would play in the streets with his older brother and against other people of the neighbourhood. Carmelo and his family moved to Baltimore where he played with his school and became a top player in Baltimore. Carmelo was transferred to Oak Hill where he continued his amazing basketball and upgraded his grades trying to get into Syracuse University (NCAA D1 college).

He would get into Syracuse University but before that, Carmelo Anthony was named for the McDonald’s All-American Game where the best High School players of the States were. “Melo” would attend Syracuse University where he would win their first NCAA Championship with Carmelo leading the team in points. He would be named NCAA’s final four most outstanding players. Carmelo would declare himself for the NBA draft.

Carmelo Anthony was picked number 3 by the Denver Nuggets in the 2003 NBA draft. Carmelo would average 21 points, 6 rebounds and 1 steal per game during his rookie season. Rumours say that he was robbed during the Rookie of the year presentation as he with more points, rebounds, better field goals, and 3pointers % and fewer minutes, he didn’t win the award. He was named 1st rookie team.

Carmelo would end up with 8 seasons in Denver he averaged 24.9 points and 6.4 points per game being 4 times All-star and 4 times All-NBA.

Carmelo was traded to the New York Knicks he played 7 seasons in New York. Melo averaged 28.7 points in the 2012-2013 season being the scoring leader. Anthony averaged 24.8 points with the Knicks. He was twice named All-NBA and 6 times All-Star.

He played with the Oklahoma City Thunders for a season where he achieved 25,000 career points. He was after the season traded to the Atalanta Hawks who waived him. Melo signed a veterans minimum deal with the Houston Rockets but after 10 games he was traded and waived again.

Melo didn’t find a team for the remainder of the 2019 season. The Portland Trail Blazers, started very poor their 2019-20 season with Damian Lillard injured. Carmelo Anthony was signed with a one-year deal where he played 32.8 minutes per game averaging 15.4 points and 6.3 rebounds per game. The Portland Trail Blazers would end up losing in the NBA Bubble in the first round against the champions Los Angeles Lakers.

After that amazing season, Carmelo Anthony was re-signed with another year’s deal. Melo agreed in a role coming off the bench to help their offense. During the 2020-2021 season, Carmelo would enter the top 10 in the All-time scoring list. In his second season in Portland Carmelo Anthony would average 13.4 points with 24.5 minutes per game. Melo won the first Kareem Abdul-Jabar Social Justice Award for his fight against racism.

Carmelo during the summer signed with the Los Angeles Lakers in the search for his first championship. Also during the summer, Melo and D. Watkins wrote a book about Carmelo’s life in Red Hook and Baltimore. The book with 30 chapters explains the life of a Black American kid during 1994 and 2003.

Melo joined the Lakers to team up with his friend Lebron James and in search of his first NBA championship. Carmelo Anthony is balling this season with the Los Angeles Lakers, he is averaging 16.7 points per game while coming from the bench. On October 25 Melo passed Moses Malone on the All-time scoring list with 27.423 points in his career, the only active player with more points than him is his teammate Lebron James.

Carmelo Anthony has won three times the Olympic Gold medals with the United States national team. This season Carmelo has been added to the NBA 75, where the NBA makes a list of the 75 best players to ever play in the league. 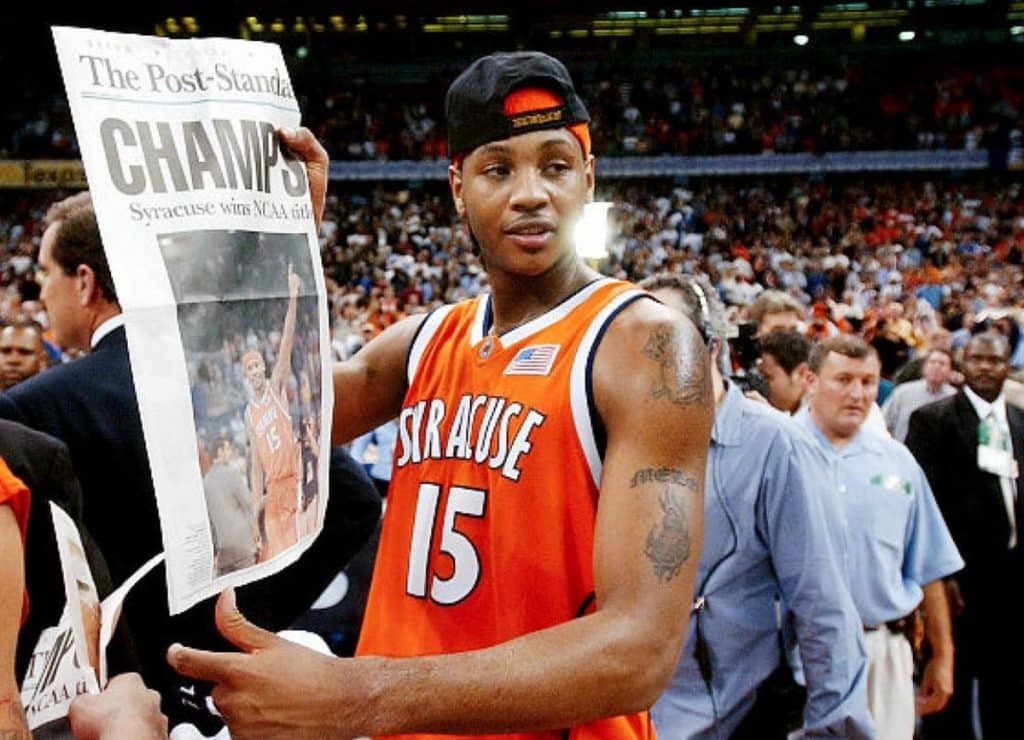