Skip to content
You are here
Home > RugbyUnion > How Does the Israel Folau Saga Affect Australia’s Chances AtThe RWC? 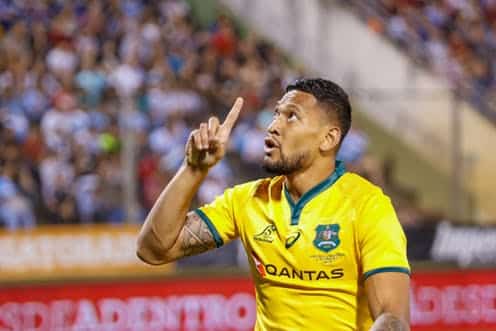 They say politics and sport shouldn’t mix, but what about religion and sport? Israel Folau, widely regarded as the top professional rugby union player in Australia, has found himself at the centre of an ongoing scandal. What it boils down to is this: he expressed some opinions, held by many, that were based on his religious beliefs. These opinions were deemed inappropriate and offensive, with the result that Folau had his contract with Rugby Australia officially terminated. Due to Australia’s loss of one of their star players, this has led to many UK sportsbook and other online sportsbooks around the world to change their odds for the upcoming Rugby World Cup.

Back in 2018, Folau responding to a fan on Instagram asking him what he thought God’s plan for homosexuals was. The reply given by Folau was ‘Hell.. unless they repent of their sins and turn to God’. He was then accused of homophobia and the CEO of Rugby Australia, Raelene Castle, announced that while the organisation didn’t agree with Folau’s views, they wouldn’t sanction him for them.

However, in April 2019 Folau landed himself in more trouble when he posted a meme to his Instagram account. It listed a number of groups, including homosexuals, adulterers and thieves, and displayed the words ‘WARNING: HELL AWAITS YOU. REPENT. ONLY JESUS SAVES’. The following day Rugby Australia formally announced its intention to terminate Folau’sfour-year contract, which naturally made many sports betting fans sit bolt upright in their seats. Though some expressed the opinion that Folau was simply expressing religious beliefs, Rugby Australia’s position was that Folau had breached the organisation’s inclusiveness policy. Folau’s contract was then officially terminated on 17 May, effectively ending his career as a top-level rugby player.

As can be expected, Folau has launched a legal fight against Rugby Australia. He’s set about raising funds form various sources to cover his legal costs. He initially set up a GoFundMe page and had a target of $3 million listed. However, he faced a lot of criticism for relying on crowdfunding when he himself had a multi-million dollar fortune to his name. The Australian Christian Lobby set up a public fundraiser for Folau, which rather quickly attracted $2 million in donations. Folau’saim is to receive a damage settlement from Rugby Australia and have his contract reinstated; his defence is that he was sacked due to religious discrimination. The case is ongoing.

Australia at the RWC

The 2019 Rugby World Cup is set to take place in Japan and will be held from 20 September to 2 November. The fact that Australia has lost one of its top players months before the World Cup has no doubt unsettled many bettors around the world, as a list of bookmakers have already adjusted their odds. The country’s chances of winning have gone done somewhat – not only because they’ve lost a top player, but also because the team’s morale and performance will have likely been affected too. Before all this happened, Australia was counting on Folau to be a key player and help the country bring home a win. This comes after 2018, which was by all accounts one of the worst years in the Wallabies’ history. Of thirteen tests the team played, they only managed to win four. Many have been hoping that 2019 would see Australia notch up lots of wins to bring them back to their former glory.

There’s no denying Folau’s situation has been a big shock for Rugby Australia. It remains to be seen how the team will fare at the upcoming World Cup. Despite the ongoing dispute between Folau and Rugby Australia, in a few months’ time attention will turn to the World Cup. Hopefully the team will manage to put this scandal behind them and really give it their all. However, the scandal may well be at the forefront of everyone’s minds and if it is, it could prove an unwelcome distraction for the team.

has published a new post."The Curious Case of Josh Rosen"
7 hours ago