One of the biggest surprises so far this season is the way Crystal Palace have taken to new manager Patrick Vieira and his progressive, possession-based style. They have ditched the defensive, sit back and counter-style run by former boss Roy Hodgson. A risk that is starting to pay off.

Vieira has rejuvenated a team that bored fans with their goal deficient displays which usually saw them playing with eleven men in their own half for most of the 90 minutes. The first-time Premier League manager has put attacking prowess and dominating possession at the forefront of his vision.

A vision that is already starting to take shape in South London in just eleven games, far quicker than anyone expected. Their attacking output has significantly improved which is all thanks to the confidence the new manager has instilled in them.

So how have the numbers changed?

According to Fbref.com, under Hodgson last season the squad averaged 9.2 shots and struggled to score with only 41 goals in 20/21. This is now up to 11 shots-per-game under Vieira with their expected goals (xG) through the 38 games of the season sitting at 52, an eleven-goal increase on last season’s tally.

A big factor for the increase in goals is the teams desire to play with the ball more and dominate possession. So far Palace is averaging 51.3% of possession against their opponents, a whopping 11.2% increase on last season’s 40.1%.

As a result of their improvement in possession, Palace has become a far better passing team. The South London outfit are averaging 410 passes-per-game on an 81.8% success rate, a huge step up from previous years. For example, last season the Eagles averaged a mere 278 passes per game with only a 76.1% success rate.

It is not only the manager and new system that’s got Palace playing far better with the ball, their transfer business in the summer has also played a huge part. New centre-back duo Joachim Andersen and Marc Guehi have been integral to the way Vieira wants to play.

Both new signings possess the incredible passing ability as well as an incredible feel for the ball which gives the team the ability to play and create from the back, something they couldn’t do under Hodgson.

Recruiting two promising defenders like Andersen and Guehi has allowed Cheickhou Kouyate to return to his preferred position in midfield, which also brings cover for the backline when players like Conor Gallagher and Tyrick Mitchell drive into the opposition half.

ALSO READ:  Do Newcastle Trust Eddie Howe To Lead Them Out Of A Relegation Battle?

Off the ball Vieira’s Palace has become one of the best pressing teams in the entire league, constantly putting teams under pressure all over the pitch from the first to the last minute and forcing them into costly mistakes.

Through the eleven games this season the Croydon-based club sits first overall in pressures with 1801, an average of 163 per game with Everton next in line with 1762. All this defensive work seems to be paying off as they also sit third in expected goals against (xGA) at 11.4 with only Manchester City and Chelsea ahead of them.

Another revelation Vieira has bought to Palace is his use of intelligent and impactful substitutions, an asset that was not utilised under their former boss.

Let’s use the Manchester City game as an example. Palace led the game 1-0 in the 65th minute and instead of changing out a striker for a defender like they did against Arsenal, Vieira bought on Christian Benteke for Jordan Ayew, Jeffrey Schlupp for Odsonne Edouard, and finally Michael Olise for Kouyate.

Instead of sitting back and soaking up the City attack they learnt from previous mistakes and kept the pressure on like they had all game, which ended up leading to a second goal in the 85th minute and secured the three points.

Palace has endured the hardest start of any team in the Premier League and have looked more impressive each time they play. They have an incredible chance to pick up important points as they face Burnley, Aston Villa, and Leeds United in their next three games.

If they can win and pick up nine points from these games, they will have 24 points going into December. After facing United on the fifth, they have another run of three games where they can pick up a load more points (Everton, Southampton, Watford).

This would have the Eagles in the top seven/eight by the time Christmas rolls around, if it continues into the new year Vieira will surely be in the manager of the year talks.

A huge leap from being odds on favourite to being sacked first before the season started.

It’s very exciting times in South London for the players and the fans, hopefully, they can keep it up. 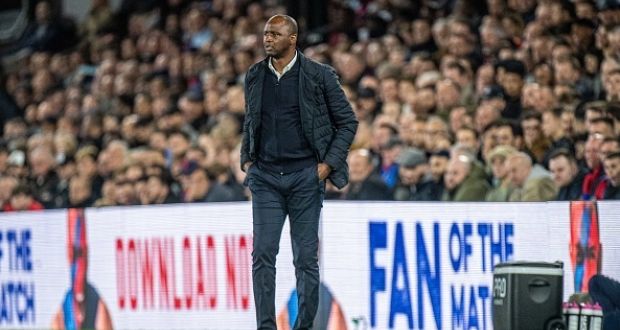