It was a good day for: Vettel & Ferrari

Vettel showed his supreme race craft on Sunday, managing his race from the front and never looking like he would be challenged for the race victory. Even the safety car restart was executed extremely well. The Ferrari team too can be pleased with the performance of their car, which shows that the development race is crucial for top teams to begin putting some pressure on the Mercedes monopoly atop the Constructors Championship. If that is to happen for Ferrari they really need two cars to finish well.

It was a bad day for: Kimi & Ferrari

Kimi was the unluckiest man of the weekend. At a time when talks about his future and other drivers joining Ferrari refuse to go away a podium finish would’ve dispelled some of the chatter. Unfortunately for Kimi it wasn’t to be. After the safety car period he was struggling for grip out of the medium compound tyres but was still in a position to grab a podium place. Unfortunately Kimi’s electric recovery system developed a fault that dramatically reduced his straight-line speed that forced him to retire, but not until he was near the back of the race anyway. The silver lining here is that Kimi should not be in anyway be under fire after the result as he drove a fantastic race throughout. The big disappointment will be that Ferrari failed to get him on the podium in a race that the Finnish fans would consider their home event and would’ve meant valuable points in the Constructor’s Championship.

It was a good day for: McLaren

After the gremlins that plagued their qualifying it was understandable to not expect much of the McLarens on Sunday. However it seems as if all the positive talk about their chassis package is not entirely hot air as they pushed both cars into the top ten, with Alonso 5th and Button 8th. They took advantage of woes befalling both the Williams and the Force India and demonstrated that progress is being made. The team also made good use of the unlucky retirements of Raikkonen and Carlos Sainz in the late stages of the race to take their biggest points hauls of the season. The result puts a more positive outlook on the team’s fortune for the rest of the season, and serves to show that as their car develops they will be challenging more regularly for points and when Honda get the engine to where it needs to be they could begin mixing it with the leaders next year.

It was a bad day for: Mercedes

Mercedes day reads like a series of unfortunate events. Losing out to two Ferrari’s is unfortunate, misjudging your braking and taking a trip to the gravel is slightly out of character for the world champion, sure. Both drivers having a coming together which resulted in a driver through penalty for Hamilton and a half a lap on a flat rear left tire for Rosberg is just getting silly. Both drivers put themselves in positions to do well and while Rosberg might consider himself unlucky to finish behind Hamilton, Hamilton should be furious that his race descended to such poor showing. Looking back he will see the trip to the gravel was more due to him locking his brakes than Rosberg’s positioning. And the incident with Ricciardo and subsequent penalty when he was fighting to get back to the front can be seen as something he should not have let happen, but that’s racing and Hamilton won’t be one to change his style off of one bad race. Rosberg’s incident with Ricciardo is more bad racing luck. He did everything right and due to Ricciardo locking up he drift much wider on the exit of the corner just catching the back of Rosberg’s car, who had stayed on his line, and the resulting puncture put Nico’s spot of the podium and possible championship lead out of reach.

It was a good day for: Max Verstappen

In a race where rivals were struggling all around him Verstappen drove impeccably to capture a surprise 4th position. Despite a drive through penalty for speeding behind the safety car the teenager paced his race excellently. He was also lucky to not experience any technical issues that have plagued Toro Rosso this season with Max and Carlos Sainz combining for 9 retirements in the first 10 races. Despite the lack of straight line speed and relative unreliability if the Renault engine Max managed his car to the end of the race in the manner of a more experienced racer to become the youngest man to get inside the top 4 in F1’s history.

It was a good day for: Red Bull

There was a lot of optimism from Christian Horner before the race about the development of the chassis of the Red Bull as well as some smaller improvements to the horsepower of the Renault powerunit and speculation that the power deficit would be nullified due to the high downforce nature of the Hungaroring. It was all looking fairly positive. But even Christian would not have predicated to that he would have both of his drivers on the podium today. And on a day when cool heads prevailed in the Hungarian heat wave it was Kvyat who finished ahead of his teammate, thanks to Ricciardo’s coming together with both the Mercedes cars, both of which damaged his car. A good points haul for Red Bull puts a little bit of pressure on Williams. But with the next two track being power tracks at Spa & Monza I wouldn’t be expecting any massive changes in their fortunes unless their Renault engine is closer to Ferrari’s after the summer break.

It was a bad day for: Force India

Two total part failures in two days, on both cars and with different parts. Their B-spec car will want to have a thorough going over during the summer break by the designers and engineers. I doubt it will affect the driver’s confidence too much but if there’s any repeat of this in Belgium then I think Sergio & Nico might just start looking looking at their options for next year. 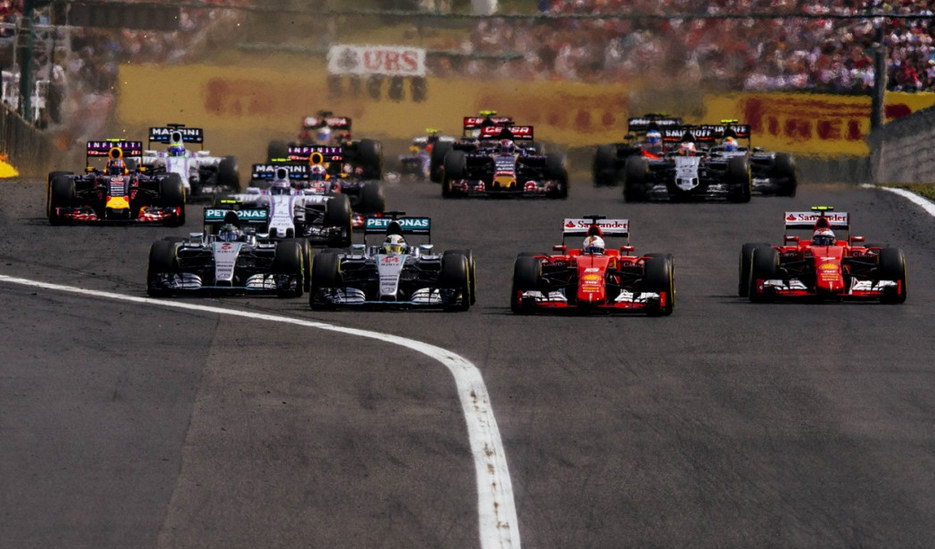