After a dominant victory over the Orlando Magic on Saturday, the Miami Heat returned back to the American Airlines Arena to host the Philadelphia 76ers. In their last game, the Heat clinched a double-overtime victory over the Sixers. Heading into this game, both teams would have to play as if this were like a playoff type game.

Bam Adebayo and Kendrick Nunn got Miami going with an uncontested dunk and a layup, while Joel Embiid, Shake Milton, and Ben Simmons would put Philadelphia ahead with their own baskets. After Jimmy Butler got on the board for the Heat with a layup, Embiid answered back with a layup for the Sixers. Adebayo scored a three-point play and a layup for Miami, but Embiid and Milton made an uncontested dunk and a layup respectively for the Sixers. After a three-pointer from Meyers Leonard for Miami, Embiid continued to score for Philadelphia, knocking down a three-pointer of his own and a turnaround jumper. With Philadelphia leading 17 to 14, Tobias Harris came off the bench and knocked down a basket, while Simmons made two free throws. Miami answered back with a layup and free throws from Butler, plus a basket from rookie Tyler Herro. As the Sixers lead 21 to 20, the Heat ended the quarter on a ten to two run, giving them a 30 to 26 lead.

Philadelphia jumped out in the lead again with three free throws from Embiid and a three-pointer from Furkan Korkmaz. Goran Dragic came off the bench for the Heat, knocking down a technical free throw and a basket. After a three-point play from Simmons, Butler would tie the game at 35 for Miami. Butler would put Miami ahead with a bucket and a breakaway dunk, but the Sixers answered back with two free throws from Simmons and a three-pointer from Al Horford. After a jumper from Harris for the Sixers, Butler and Nunn took over on the offensive end for the Heat. With Philadelphia ahead 45 to 42, Miami went on an eleven to ten run to close the second quarter, taking a 56 to 52 lead.

In the third quarter, Miami went on a twelve to two run, before Embiid made a three-point play for Philadelphia. Butler and Duncan Robinson knocked down a three-pointer each for the Heat, while Simmons made two free throws. There was a break in the action as Leonard hobbled off the court with an ankle sprain. Leonard would not return back to the game, and neither did Herro, who left the game with a sore right foot. Afterwards, Simmons scored a slam dunk for the Sixers, while Butler made another three-pointer for Miami. With the Heat leading 74 to 60, they went on a twenty-three to seventeen run, giving them a 97 to 77 lead.

As the fourth quarter commenced, Milton was awarded two points after Miami committed a goaltend. After a three-pointer from Mike Scott, the Heat bounced back with baskets from Adebayo, Dragic, and a dunk from Kelly Olynyk, giving them a 103 to 82 lead. After Embiid scored a layup and a basket for Philadelphia, Derrick Jones Jr. made a slam dunk for Miami, followed by a three-pointer from Robinson. Embiid and Milton responded with their own three-pointers, but Adebayo and Dragic knocked down a basket each, putting Miami ahead 113 to 92. Robinson continued hitting the three-ball for Miami, along with Dragic, Nunn, and Jones Jr. The Heat cruised to victory on a twenty-four to twelve run, en route to a 137 to 106 win.

The Heat and the Sixers were neck and neck in the first half, but the second half told an entirely different story. Miami scored 41 points in the fourth quarter, which saw Jimmy Butler put up a season high 38 points. Despite the injuries to Meyers Leonard and rookie Tyler Herro, Miami went deep into their bench and still continued to score at a high pace. The Heat 48 for 85 from the field, 25 for 30 from the free throw line, and were 50 percent from three-point land. It should be also noted that there is a franchise record low 3 turnovers for Miami. A highly impressive night for the Heat.

For the Sixers, Mike Scott had 17 points, Ben Simmons made 16 points, Shake Milton with 11 points, and Joel Embiid with a double-double of 29 points and 12 rebounds.

For the Heat, Jimmy Butler had a season high 38 points, Goran Dragic made 24 points, Duncan Robinson with 19 points, Derrick Jones Jr. had 15 points, and Bam Adebayo with a double-double of 18 points and 11 assists.

The Heat embark on an 8 day, 5 game road trip, starting off with the Los Angeles Clippers. Game starts Wednesday at 8 on Sun Sports and on ESPN. 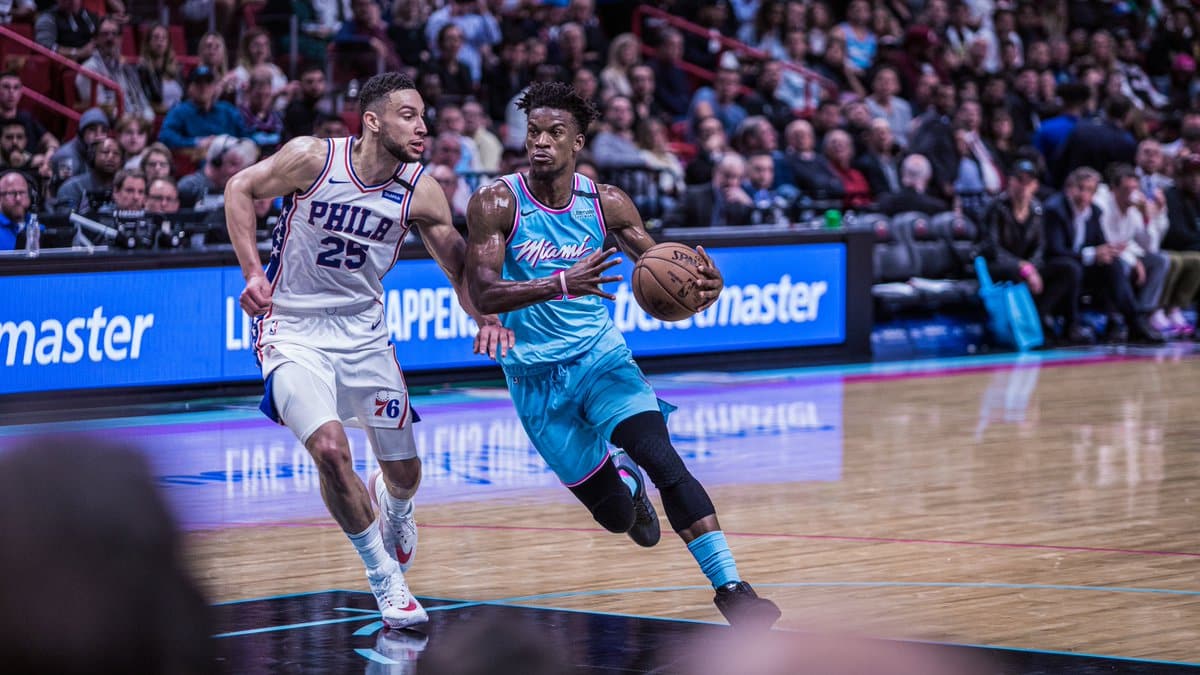