So, after a year’s delay, the Euro 2020 tournament finally got underway, and the first match of 51 took place in Rome’s Stadio Olimpico and it saw Turkey take on Italy in front of around 16,000 fans which was a welcome sight for all concerned after a year and a bit of challenging situations for the authorities not just in football but all walks of life, so the return of fans to stadia over the last few months certainly helps everyone involved and makes it so much better for the players and the people watching, having a natural atmosphere inside the ground cannot be replicated, football is nothing without fans and this last year or so has cemented that fact for sure.

Rome as said was the setting for this curtain-raiser to the 2020 tournament, and in fact, the last major tournament game to be staged in Italy was at the Stadio Olimpico when the then West Germany defeated Argentina in the 1990 World Cup final, so a big day for the country and their national side who came into this contest in the midst of a 27 game unbeaten run, and an eight-game winning streak to boot, so they would have been very confident of a winning start here, and knew their opponents Turkey had never beaten them in ten attempts, with their only major tournament meeting a 2-1 win for Italy back in Euro 2000 in France, but the Turks have been in decent form recently and are tipped by many to cause a surprise or two this summer, so could they upset the apple cart in the opening game of this competition and stun the Italians in their own backyard?

Well, Italy named 37-year-old Giorgio Chiellini and 34-year-old defensive partner Leonardo Bonucci in their starting line-up, whilst Chelsea’s Champions League-winning midfielder Jorginho also made the Italian starting eleven, but Andrea Belotti, who scored four times in qualifying, had to make do with a place on the bench. For Turkey Buruk Yilmaz, who is now 35 years old, will lead the line in the absence of their top scorer in qualifying Cenk Tosun who sadly misses the tournament after sustaining a knee injury in April, whilst winger Cengiz Under, who had a chance of starting after he netted as a substitute in the Turks last warm-up game, could only make the bench, showing how strong their first eleven was, but could they upset the Italians here?

After an opening ceremony which included fireworks, giant coloured balls, drummers suspended from ropes from the roof the stadium as the competing nations’ flags are unfurled to some sort of synth-rock soundtrack, and then Andrea Bocelli singing Nessun Dorma, the soundtrack to the 1990 World Cup in Italy and an iconic tune ever since, we were ready for the action on the field to begin, and the first half certainly belonged to the Italians that is for sure, although they had nothing to show for it.

Immobile saw an effort go into the side netting and also sent a header wide, whilst Insigne curled wide from inside the box, and Turkish keeper Cakir tipped a Chiellini header brilliantly over the bar, whilst the Turks, who had barely laid a glove on their opponents, saw their best moment and a rare attack see Yilmaz play a teasing ball into the box and almost see Tufan get on the end of it but Italian keeper Donnarumma, who had been a virtual spectator so far, managed to get to the ball first and parry away from danger, but it was Italy who had done most of the attacking play but came up against a ‘A Wall Of Meat’, the Turkish term for ‘Parking the Bus’ or the red wall of defence and it seemed likely that something special would be needed to break this defence down.

This likely looked to come down the left through Spinazzola, who had caused a few problems during the first half, but the opening goal of Euro 2020 turned out to be an own goal as Italy finally grabbed a lead they deserved, as Domenico Berardi, who had also been a threat during the first half, fired a ball across goal and it went in off defender Merih Demiral, and that Turkish wall had been breached, and they now had to come out and try and get back into the game.

But, it was the Italians who looked more likely to add another, and sure enough in the 66th minute they doubled their advantage when Spinazzola was involved this time, receiving a cross from Berardi before forcing a decent stop from Cakir, but the keeper could only parry the shot back into play, and Immobile was on hand to fire the rebound home, and you felt the game was as good as done, and with just over ten minutes to go Italy had a third as after keeper Cakir’s poor clearance ended up with the Italians and three quick passes later, Insigne curled a lovely effort into the far corner, and in their 39th European Championship contest, they had netted more than two goals in a game, and capped a wonderful opening to this tournament for them, whereas for Turkey it was not a vintage performance and they had been outclassed in this one, and now need to pick themselves up for their next group game in a few days time against Wales in Baku.

Italy face Switzerland next in Rome, and on this showing will be full of confidence of picking up another three points in that one, they had just smashed a Turkish side who have beaten France and Holland in recent times, so this is a decent Turkey side, but the Italians had not given them a sniff in this game and will be a threat to anyone in this competition if they continue to play this way, 28 games unbeaten now, and nine straight wins, very impressive. 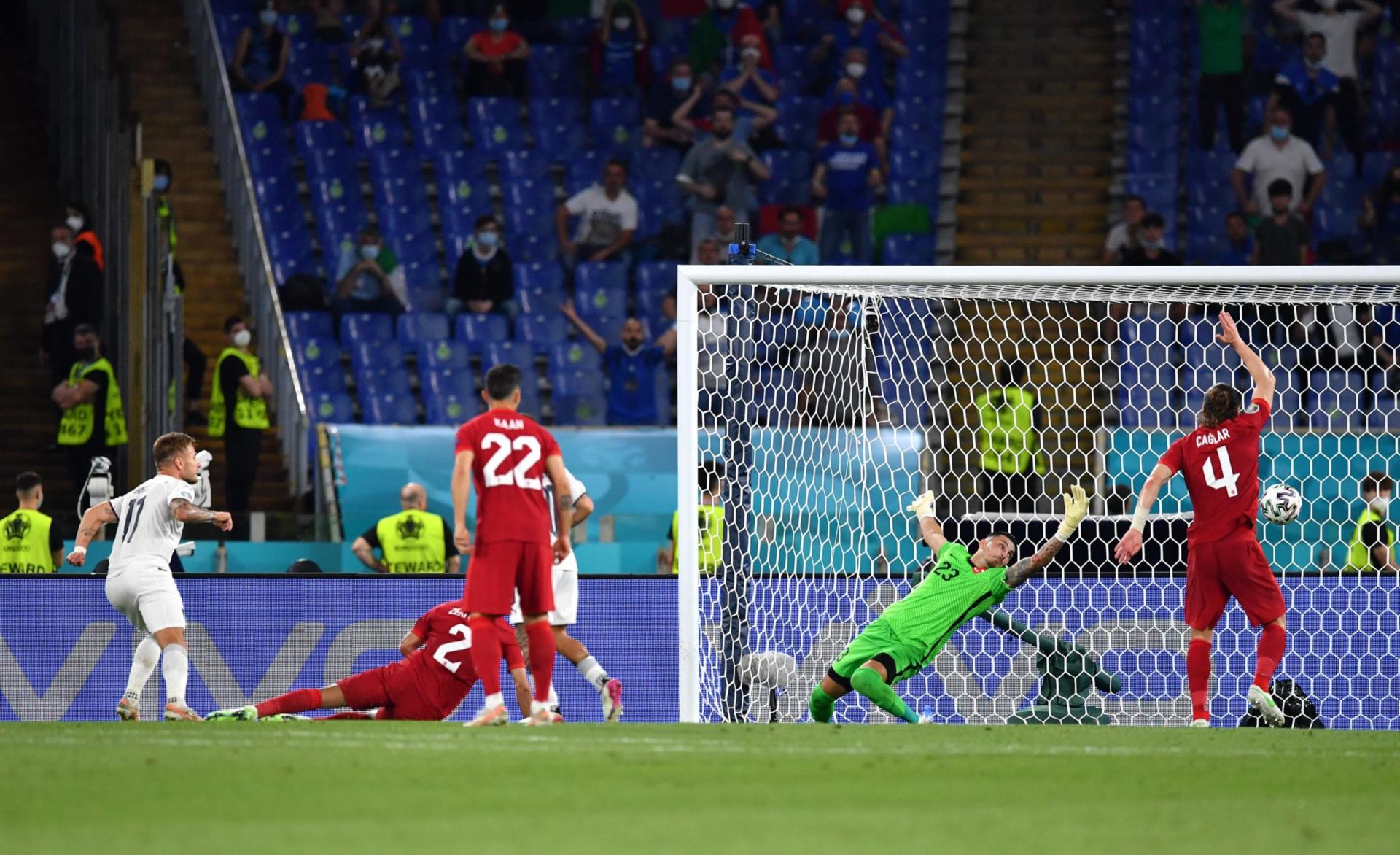