Afghanistan’s first ever test didn’t panned out to be the great one, it was a complete dominating performance by the number 1 test team which beat Afghanistan in just 2 days.

India’s batting in the 1st Innings:

The openers, Murli Vijay and Shikhar Dhawan started the innings in a blazing way. Dhawan is in form of his life, he thrashed the Afghanistan bowlers and the visitors were just seen restless when Gabbar was in full flow. On the other hand, Murali Vijay too wasn’t far behind Dhawan. He too took on the Afghan bowlers and piled on more misery on them.

Dhawan become the first India batsmen in test to score a century before lunch. It was ruthless display from Dhawan, which helped him to score his 7th test century. Even the mystery spinners were also not spared, Mujeeb Ur Rahaman and Rashid Khan who are so successful in T20 Internationals and ODI cricket, they were blasted all round the Chinnaswamy Stadium.

Till Lunch the session went the India’s way, but in the last 2 sessions Afghanistan pulled things back decently. It was Yamin Ahmadzai who gave a vital breakthrough to Afghanistan. Ahmadzai picked up the wicket of Dhawan. He become the first Afghanistan bowlers to pick up a wicket in test match. Dhawan was out after scoring marvellous 107 runs.

KL Rahul batted at the number 3 position in this match, he and Vijay continued from where Dhawan and Vijay left. India’s middle order batsmen build another partnership above 100 runs, this partnership took India to solid position on the first day.

After adding 168 runs with Dhawan, Vijay shared yet another partnership of 112 runs with KL Rahul. Vijay was going strong despite Dhawan’s fell early after lunch and Rahul used the opportunity to cement his place in the side. He played well at the number 3 position.

The second hundred run partnership on the trot troubled the Afghans. In this process Murali Vijay also scored his century and made India’s position solid in this test match. India were going on well in this match, but the wicket of Vijay allowed Afghanistan to make mini comeback.

Vijay was out after scoring 105 runs and KL Rahul who played so well was also out after hr reached his century. Rahul was clean bowled by Ahamdzai for 54 runs. After guiding India to the 300 run mark, Stand in Skipper Ajinkya Rahane was also dismissed for just 10 runs.

Pujara played well for sometime but he too didn’t last for long. He was out for 35 runs. India ended their first day with another wicket, Dinesh Karthik didn’t had a great come back to test cricket. He was run out for just 10 runs.

At the end of the first days play the hosts scored 347 runs with Hardik Pandya and Ravi Ashwin batted out the last few overs. On the second day it was Hardik Pandya who played a good knock which allowed India to put up a good score on the board.

Hardik Pandya scored 71 runs and he good the support from Ravindra Jadeja and Umesh Yadav. Due the fire power provided by the last few batsmen, India scored 474 runs in their 1st innings.

Afghanistan Bowling in the 1st Innings

The in experience of the Afghan bowlers did the damage for the visitors. They might be good in the limited overs cricket but test cricket is a different format, they should know this.

The batting collapse of Afghanistan:

The in experienced of Afghanistan team was in their batting also. Apart from Mohd Shahzad every other Afghan batsmen was out due to poor shot selection. Mohd Shahzad wasn’t fit enough to complete a cheeky single, it was a direct hit from Hardik Pandya which saw Shahzed short of his crease. He was out for 14 runs.

Then the wickets continued to tumble for the Afghanistan batsmen. Only 5 batsmen reached in double figures and only 1 batsmen scored above 20 runs for them. They were bundle out for just 109 runs in their first innings.

Afghanistan’s batting failure was seen in their 2nd innings also. Again, just like the first innings there were no big partnerships which would have helped them to put a fight. In their second innings the visitors were bowled out cheaply yet again. Due to the great Indian bowling, Afghanistan were bundle out for just 102 runs.

This time Ravindra Jadeja picked up 4 wickets, Umesh Yadav picked up 3 wickets, and Ravi Ashwin picked up 1 wicket to his name. It was a dominating performance from Team India which earned them a big win by an innings and 262 runs.

Man of the match was awarded to Shikhar Dhawan for his magnificent 107 runs. India also won the hearts by their sweet gesture to invite Afghanistan members to share a pose with the winning trophy. 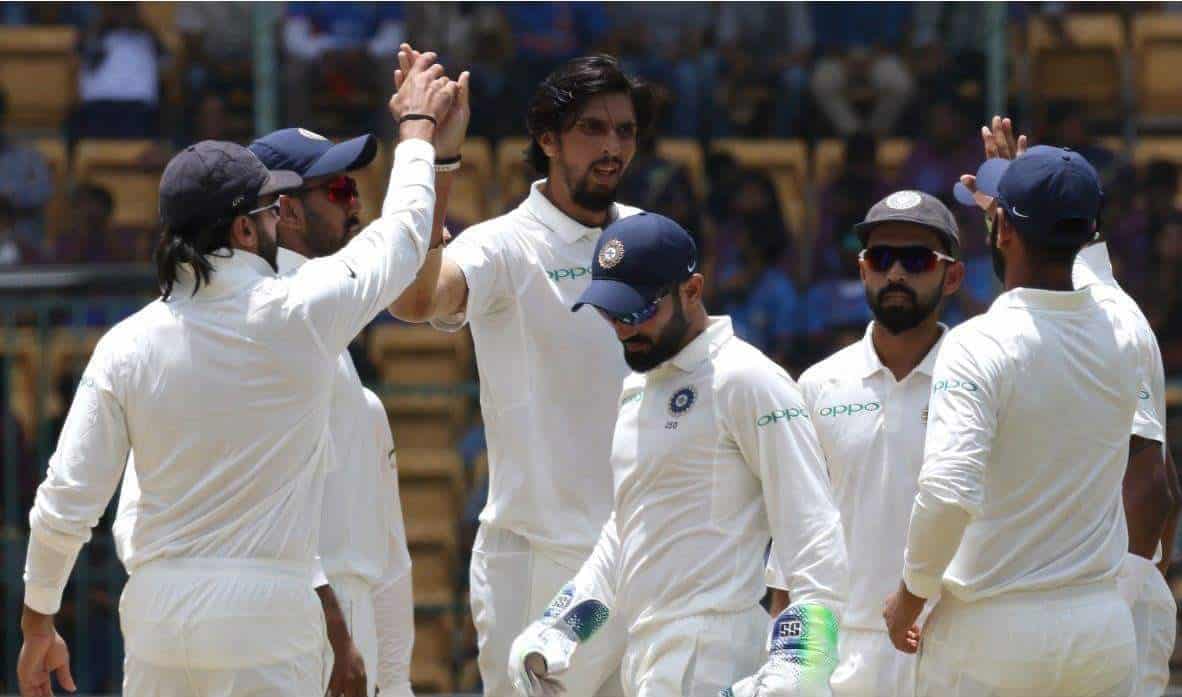