One for the ages

In my previous article, I had written about how Sachin captivated the Australian cricket public and helped launch the India Australia cricketing rivalry. However, India vs Australia 2001 series was the real beginning of this rivalry.

India and Australia came into this series from completely contrasting situations.

India coming into this series

The match fixing scandal had torn the Indian cricket apart. The team had lost its first home series after many years to the South Africans. Before that South African series, they had been humiliated by the Aussies in the 1999/2000 series. Sachin Tendulkar had to relinquish his captaincy, yet again, having let down by his team mates. India had to rebuild their team under a new captain, Sourav Ganguly. His ally in this effort was to be John Wright, the new coach of the Indian team.

Australia coming into this series

Australian cricket, on contrast, was riding high. Australian team was on a run of 15 unbeaten tests. Adam Gilchrist had no idea, until this series, what it was to lose a test match! This team had conquered every cricketing land they had gone to, except India. Steve Waugh, the Australian captain, declared India as the ‘Final Frontier’ for his all-conquering team.

The media was abuzz with the haughty statements of Waugh like ‘Final frontier’ and ‘mental disintegration’ etc. Indian team was not in any mood to reply to this trash talk. To be honest, India had nothing much to crow about!

The test at Mumbai got off to a bad start for India. Except for Sachin, none of the Indian batsmen could hold their ground in the first innings against the Aussie attack that comprised McGrath, Fleming, Gillespie and Warne.  When their turn came, Australia did not get off to a great start either. They lost half their side before scoring 100 runs. But, what stood out, even in that situation, was the Australian penchant to attack the opposition. 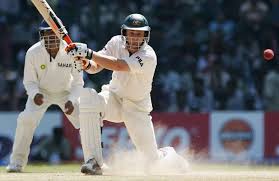 Gilchrist tore the Indian attack apart and scored a faster than run-a-ball century to show why this Australian team was the best in the world. Hayden supported him ably with a finely crafted century.

Indian batting surrendered meekly in the second innings to hand Australia an easy 10 wicket win. Only Sachin managed to score a half century in both the innings. The Sportstar declared that Sachin was India XI! Australia equaled the West Indian record of 16 unbeaten test matches in a row. The second test at Kolkata – Who wrote this script ?

The city had a new name but everyone expected the same old story. The Australian innings got off to a strong start with runs from all the top order batsmen. In those days, Australia was notorious for middle order collapses. It happened again in this match, with Harbhajan’s hat trick. What I forgot to mention was that those middle order collapses would invariably be followed by Steve Waugh’s century, along with the tail. That happened again as well. Steve scored his customary century and killed India’s hopes. Same old, same old!

Indian batting continued its horror run and for a change, Sachin failed as well. Not quite same old! Steve Waugh, asked the Indian team to follow on. At least this time, the Indian openers showed some spunk and held the Aussies at bay. After the first wicket, came the surprise move by the Indian think tank. VVS Laxman was the only batsman to have shown some fight in the otherwise forgettable first innings. So the captain sent him in the place of Dravid, who had struggled against Warne and the Aussies since the 1999 Australian home series. VVS played with freedom and attacked the Aussies in the company of Sourav. When Day 3 ended, VVS had scored an unbeaten century. But the Indian team was 4 wickets down and stared at yet another defeat. Only an out of form Dravid and the weak tailenders remained to give company to VVS.

Day 4 began with the Aussies eager to conquer their final frontier. One could clearly see the discomfort that Dravid was in, against Warne. Since the 1999 series, Warne would bowl the leg break from just outside the leg stump and get Dravid bowled or caught in the slips. Everyone felt that it was only a question of time before Warne got him this time as well. But this time, Dravid learnt from the other end watching VVS play those inside out cover drives and delectable on drives of Warne.

The defining moment of the innings, and possibly the series, came when Dravid jumped out of his crease and played the on drive, after getting to the pitch of Warne’s wicked leg spinner. Dravid had slayed his inner demons against Warne. Aussies realized that they were in for a fight now. What a fight it turned out to be ? VVS and Dravid played all day and finished unbeaten with 275 and 155 respectively. The series had come alive and the Final frontier remained firm. On Day 5, India set Australia an improbable score of 384 to chase. Most teams would have settled for a draw. Aussies would have none of it and wanted their historic 17th win. This was one of the reasons why India would win the test match. Harbhajan tempted and tantalized the attacking Aussie top order and got six wickets. Sachin, with his assortment of leg breaks and googlies, accounted for three precious wickets. Gilchrist was out for a king pair. With umpire Shyam Bansal’s generous help towards the end, India completed a historic win over the Aussies. Gilchrist tasted his first ever test defeat!

This Kolkata test was only the third time that a team had won a test match, after having followed on. The first one was in 1894. The more recent one was when England, inspired by Botham, beat the Aussies in Leeds. The Kolkata test continues to be remembered by every Indian fan to this date and has been a source of false hope on many occasions!

The third test at Chennai – The perfect test match

Kolkata test was a Bollywood drama, but the Chennai test was the perfect test match. Two teams, now on even keel. One slighted by the first defeat and the other risen from the ashes. Steve Waugh wanted his team to show that they can take defeat in their stride and come back strongly.

The first day of the test showed that Steve’s men were made of steel. They ended the first day with just 3 down for 326 runs.

Day 2 revealed the frailties in the minds of Steve. Waugh got himself out, bizarrely, handling the ball. However, Hayden continued his fairy tale and scored his first double hundred. Harbhajan finished with 7 wickets. Indian batting continued the good day and finished strongly.

Day 3 saw one of Sachin’s brightest test innings ever. Till then, Sachin seemed to bat with lots of concern on his mind, having to carry his team with his bat. But this innings, his bat showed the joys of liberation.  The joy was no less evident in his getting to his century with a SIX! May be the rise of VVS and the resurgence of Dravid, had something to do with it. Day 4 and early part of Day 5 were evenly balanced with Australia fighting back with a good second innings total. Harbhajan dismissed eight Aussies to ensure that India did not chase too many. India had to chase 155 runs on a last day pitch with the series on the line.

It is not over yet

India, in those days, liked to make every match interesting. So they decided to make heavy weather of the low total. McGrath and Gillespie made it tough for India. At one point, India were 7 down with 20 runs to go. In this context, Steve Waugh’s persistence with Miller and Warne was inexplicable. The duo gave the much-needed scoring opportunities for the Indian batsmen. Sameer Dighe scored some valuable runs. As fate would have it, it was Harbhajan who scored the winning runs after playing out some nervous deliveries.

The seesaw battle since the day 3 of the second test remains etched in the memories of cricket lovers all over the world. Every epic has its heroes. Mathew Hayden, VVS Laxman and Harbhajan Singh were the heroes of this epic. However, the series was a nightmare for Ricky Ponting. Ponting became Harbhajan’s bunny and the tag would continue to dog his otherwise glittering career.

The series was notable for many non-cricketing antics as well. Michael Slater’s verbal fight with Dravid, Sourav’s deliberate delay tactics at the toss, Waugh’s mental disintegration back fire, Harbhajan’s sobriquet “The turbonator”, to name only a few.

If not for anything else, but for at least the Kolkata test, this series will remain in the cricketing folklore forever.

If you are interested in the detailed scores etc, please visit http://www.espncricinfo.com/c/engine/series/60702.html