England had recycled the ball 19 straight times. Wales was bending but not breaking in the inferno of Millennium Stadium. Each glimpse of the tryline by England was snuffed out in a blink by one or two Wales jerseys, whipped along by the sell-out crowd.

Then the ball was passed from a ruck to England centre Jonathan Joseph, who was static, right of the posts and 10 metres out. Wales flyhalf Dan Biggar squared up to him.

Joseph stepped off his left foot and brushed around the outside, leaving Biggar flailing at air.

But more defenders were closing in. George North came from the outside to squeeze Joseph around the chest, and Rhys Webb was flying in to smother him from the inside.

Joseph fended off North, ducked under Webb, and all of a sudden he was in the open, five metres out, and scoring the try that launched England’s second-half comeback in a huge upset victory.

That set the tone for Joseph’s second coming in international rugby.

He enters the final round of the Six Nations on Saturday as the leading try-scorer with four – twice as many as anyone else – and with England on the brink of a first championship since 2011.

It’s a return to the limelight that has rewarded Joseph’s resilience, and relieved a mighty grateful England.

Coach Stuart Lancaster was in a pickle before the tournament. He had a world-class pack, and a top-class flyhalf and fullback, but his midfield was a mess. He’d used 10 different starting centre partnerships, and injuries were killing his options.

Not available were Manu Tuilagi, the one player he was on record as saying was his first team pick, Brad Barritt, Luther Burrell, and Kyle Eastmond.

Joseph was in the squad for the autumn tests, but hadn’t played. England finished that series fielding Barritt and Billy Twelvetrees in the win over Australia.

When Lancaster chose Joseph at centre for the Six Nations opener against Wales, Joseph was, as the pun says, the centre of attention.

Lancaster said Joseph had improved in the areas they’d asked him to, defence and working through the breakdown. He’d also shown the temperament to deliver in big games.

“He’s been brilliant, especially this year with his communication,” Ford says of Joseph. “His defence has been brilliant as well, he leads that at the club.

“With JJ, he has that ability to create something out of nothing with an outside break or offload with one hand and, like you saw against Toulouse, his little kick through to create that try.

“He always wants the ball in his hands in attack, but he is also good at the things people don’t see, like his kick-chase, and his communication about when to kick.”

That has come with maturity.

He was first capped on the tour of South Africa in 2012, soon after his 21st birthday. But he received only five more caps, limited by injuries and a failure to up his game.

His attitude changed when he missed the tour of New Zealand last June.

“The difference is his belief that he belongs in international rugby,” Catt says. “He understands the game. He’s a very good communicator, and he’s got a very low error rate.”

Joseph proved he had more highlights in him after Wales, against Italy a week later. He shimmied around Kelly Haimona, dummied, and crossed, and for try No. 2, ghosted onto Ford’s delayed pass and sped 50 metres to score. He was hailed as the new Jeremy Guscott. Against Scotland last weekend, another sublime Ford pass set him up for a cut inside and try.

Joseph spent hours as a kid honing his footwork and anticipation playing tennis. He was good at tennis. His physical coordination was rated highly, but his mental fortitude not so much. Tennis is a lonely sport, and Joseph craved company. So he turned to his dad’s game, rugby.

Ivan came to England from Carriacou, an island among the Grenadines. He was a flyhalf for Northampton briefly in the mid-1980s. When Jonathan, his first son, was born, Ivan flippantly wrote ‘England rugby player’ as an ambition in his birth book.

To help Jonathan reach his potential, Ivan moved him to Millfield, an independent school in Somerset, and a rugby nursery also for England captain Chris Robshaw and prop Mako Vunipola. Jonathan got in with a grant from London Irish.

He flourished at London Irish, and moved to Bath in 2013 to follow his London Irish coaches. He received a contraction extension in January.

Because he’s smaller and lighter than the likes of Tuilagi, Joseph has relied on technique – footwork, a wicked fend, vision, and acceleration – to combat his more confrontational contemporaries. They’re uncommon gifts in an era when defences are tighter than ever.

“JJ’s footwork and his ability to slip out of tackles is phenomenal,” Catt says. “That’s the x-factor you need to win games.” 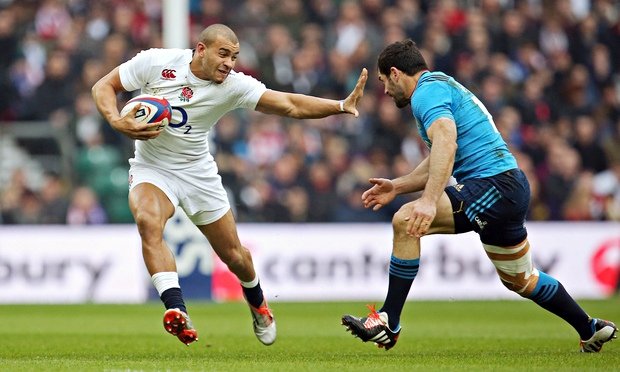