A few months ago, this was a genuine topic of discussion. Italy had shown signs of improvement (victory over South Africa), but the improvement hasn’t been consistent. For a while, the talks of Georgia joining the Six Nations quieted down. Over the last month and a bit, rugby fans have witnessed a miraculous Six Nations Championships. A real dark horse in Scotland has shone, despite little belief from the rugby community, and England has made history. Due to this, calls for Georgia to join the Six Nations have again become vocal. It’s a reality that might make more sense than one would think at first.

Italy joined the Five Nations (now Six Nations) in 2000, but their performances haven’t really improved. Due to this, outcries of Georgia to have the opportunity to replace Italy, or join the Six Nations have become louder and louder. Georgia made a real impact at the Rugby World Cup in 2015, being drawn into one of the hardest of the four pools. They managed to finish with two wins out of four, with those wins coming against Namibia and Tonga. Their most impressive performance, despite what the score suggests, came against the best team in the world in the All Blacks. Georgia lost 43-10, but the match was actually very competitive at times. Georgia’s captain Mamuka Gorgodze even finished what was a very impressive performance, with the man of the match award. Again, despite what the score suggests, Georgia showed international rugby fans, that they can compete with the best.

Georgia recently defeated Russia, Spain, Germany and Belgium in the Rugby Europe Championship. They have already won it for six consecutive tournaments, and being four from four in the group, you can’t write that off from making that seven. This series of dominant performances shows that Georgia are not only in a hunt, but deserving of a greater challenge. Their dominance shows that other teams such as Germany, can’t keep up with them. Georgia showed that they have a reasonably good skill level at the Rugby World Cup. If they keep versing teams like the ones they are versing now, they will continue to win trophies but they won’t improve, they won’t fulfill their potential.

Little do people know, that three countries in the world have rugby (15s) as their national sport. New Zealand, Wales and Georgia all live and breath rugby.

“Rugby enjoys great state support in Georgia. Support and great patriotism demonstrated throughout the years by the Rugby Union and private sector, considerable rugby infrastructure has been created in Georgia.” – Prime Minister of Georgia Giorgi Kvirikashvili

For a Prime Minister, a leader of a nation to come out and emphasise his countries love for something like rugby is truly awesome. He also went onto mention that other rugby nations considered Georgia a country of rugby. Later this year, Georgia get the chance to prove this to the world. They will be the hosts of the Under Twenties Rugby World Cup. For a country such as Georgia to be given this type of chance by World Rugby is awesome, it shows that they are a developing rugby nation, but it needs to go that next step further.

Promotion and relegation would tarnish the prestige of the Six Nations. If a team such as France was to replicate what they have done once before and place last, then they would be lost to tier one rugby for a year. The rivalries that would be postponed for another year such as against the All Blacks in November, would be detrimental to the success of that team at the next Rugby World Cup. The ideal scenario for Georgia would be that they are added to the present six team format. Hence, the Seven Nations would be born. As it is an odd number, each side would have the chance to have a bye week, rather than one week breaks every two weeks.

Georgia is a rugby nation. They are a country with a population similar to New Zealand’s. Due to their place geographically, I believe that they have struggled to breakout against top opposition. Simply, Georgia deserve better. They are a country with intent, drive and passion, they just need opposition of a high caliber. The Six Nations would be a way to improve their performance, so it should be in World Rugby’s best interests to take this seriously, and discuss it. 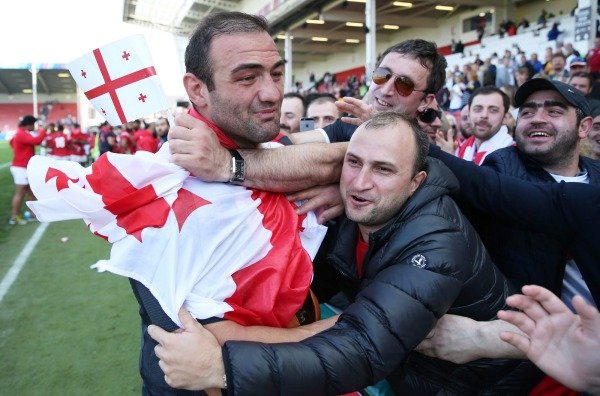