India through to the semi finals after crushing down Australia by 6 wickets at Punjab cricket Association in Mohali.

This win largely came due a unforgettable innings by the Legend that is Virat Kohli.

In this quarter final match, Australia won the toss and choose to bat first.

They got to a flying start, their openers Khawaja and Finch gave Australia a perfect start. Both the openers took on the Indian bowlers. At the start of innings Australia’s run rate above 10 an over.

This was pulled back after the power-play overs were done, as usual Nehra picked up the first Aussie wicket. Khawaja was out after scoring brutal 26 of just 16 balls.

But, Finch was going strong until Dhawan caught him for 43. Hardik Pandya took this wicket, this time Australia’s middle order didn’t fire.

Warner and Captain Steve Smith didn’t trouble the Indians much.

Maxwell struggled to hit the ball with ease. He was not at all comfortable. He scored a scratchy 31 of 28 balls.

Watson played his last match of his career. He batted well. He took Australia 150. He and Peter Nevill made sure that their bowlers will have something to defend.

Again, Dhoni experimented but it failed, he allowed Hardik Pandya to bowl the last over. After picking up the wicket of Maxwell, Hardik conceded 11 runs in his last 5 deliveries.

Watson remained not out in his last international match. He scored 18. Peter Nevill was the other batman who was not out 10.

India again had a decent start. But Rohit and Dhawan didn’t capitalise on it. They had a start; they didn’t choose to convert it. Both gave their wickets away. Dhawan scored 12 and Rohit scored 13.

Raina also couldn’t get going. He scored only 10.

India was in deep trouble when Yuvraj and Kohli rescued India yet again. The duo shared a much needed partnership until Yuvraj was struck by an ankle injury. Somehow he carried his innings. Until he perished to Watson for 21.

Dhoni and Kohli guided India through the match. In this process Kohli completed his 2nd T20 fifty in this tournament and 15th T20 fifty overall in his career.

Both ran well between the wickets and took the risk of playing the big shots.

Kohli scored 19 runs of James Faulkner and he turned the game on its head in the last four overs with the flamboyant Kohli unleashing a flurry of shots to take the game away from the Australians.

Skipper Dhoni finished the game in style by hitting a six.

India won this match by 6 wickets and enter the semi final of World T20 2016.

Man of the Match – Virat Kohli for his 82 not out. 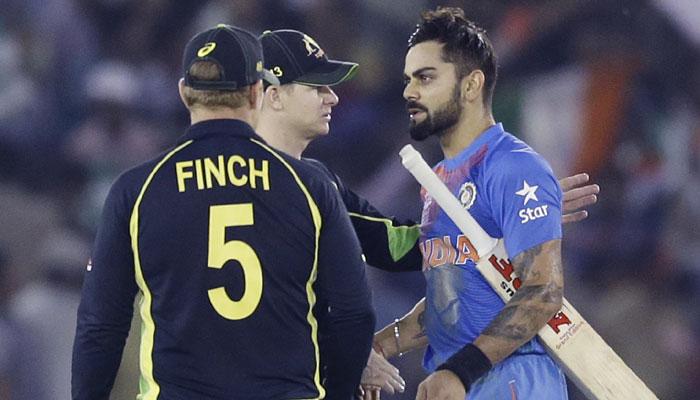