While comfortably positioned at the top of the points table Mumbai Indians will take over Kings XI Punjab at the Wankhede stadium in Mumbai. Wankhede has literally been the fortress for Mumbai Indians where they have won most of their games and hence Punjab would be need to play their top games to stay alive in the competition. The last time the these two teams met, Mumbai thrashed Kings XI Punjab by eight wickets, chasing 198 in just 16 overs.

Sun-risers Hyderabad registered a seven wickets win over Mumbai Indians but Mumbai still remain at top of the table. Mumbai Indians were restricted to a mere total of 138 for seven and they failed to score big despite the likes of inform Rohit Sharma, Kieron Pollard, Nitesh Rana and others.

Hyderabad bowlers bowled in the right areas and kept on taking wickets at regular intervals to ensure that Mumbai batsmen do not settle down till the end overs. Punjab will look to do the same against Mumbai Indians with the likes of Sandeep Sharma, Mohit Sharma and Akshar Patel to restrict them to a low total to give their team a chance to win this.

Mumbai Indians batting failed in the last match as they only managed to score 138 for seven within the twenty overs which is pretty much not as per their standards. Skipper Rohit Sharma, Nitish Rana, Parthiv Patel, West Indian Kieron Pollard need to fire once more to post a mammoth total for the Kings XI Punjab to chase.

Punjab will play without Hashim Amla as she has returned home for national duties and hence its time for Glenn Maxwell and Shaun Marsh to score big and help the team. Punjab’s Shawn Marsh has scored more runs against Mumbai Indians than against any other IPL team.

Sandeep Sharma has gobbled up a few big names in the last couple of matches; his last five scalps are Aaron Finch, Suresh Raina, AB de Villiers, Virat Kohli and Chris Gayle. Will he be able to continue his trend and also include Rohit Sharma or Kieron Pollard to that list?

This will definitely be the most interesting battle to watch out for. Kiwi pacer Mitchell McClenghan, Lasith Malinga and Jasprit Bumrah along with the Pandya brothers will also be the ones to watch out for. 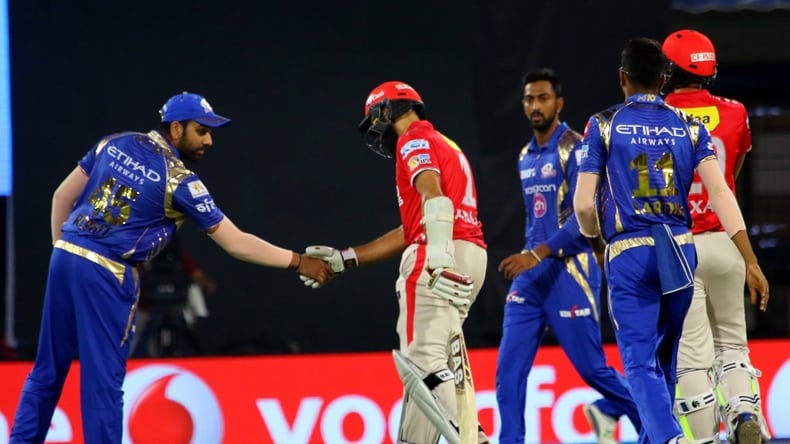