Much of the talk ahead of this season’s Champions Cup has been dominated by the inclusion of three South African sides, the C Cell Sharks, Vodacom Bulls, and the DHL Stormers, as the boundaries of Europe have been stretched and broken, potentially creating the most competitive season in the tournament’s 27-year history. However, Leinster, one of Europe’s traditional heavyweights, produced the most impressive performance of the weekend, dismantling one of their fellow favourites for the title, Racing Metro, away in Le Havre.

It was a scintillating performance from the four-time European champions, a perfect blend of power and precision and making a mockery of their travel woes as a skip across the channel turned into a trek. Leinster were ruthless, taking advantage of two sin-bin periods, and scoring 28 points. Their back-row was superb, led by IRB world player of the year, Josh van der Flier, who contributed two tries as Leinster scored six in total in their 42-10 win. Leinster’s victory came despite missing several key names, such as Jonny Sexton and Tadgh Furlong, as they showcased their enviable squad depth. It’s early days, but the stars are aligning for Leinster; with the final in Dublin, they would love to send Jonny Sexton’s glittering club career off with some silverware and equal Toulouse as five-time winners.

Tournament holders La Rochelle produced a similarly impressive performance, underlying their European credentials with a 46-12 dismantling of Northampton, with the match being all but over by half-time. Buoyed by a typically fervent crowd, La Rochelle wrapped up the bonus point before half-time, and with the future of Head Coach Ronan O’Gara now stable, they’ll fancy themselves to back up last season’s success. Another of the tournament’s favourites, Toulouse, got off to a winning start, edging Munster 18-13 in an arm wrestle at a misty Thomond Park. Toulouse’s style of play is often noted for its flamboyancy and flair, but they showed a gritty side that is often essential to European success. Reigning French champions Montpellier also got off to a winning start, overcoming an 18-point deficit to beat London Irish 32-27 in Brentford. The hosts were firmly in control until hooker Augustin Creevy was sent off late in the first half for a high tackle on Anthony Bouthier. Zak Mercer claimed man of the match for the visitors, giving England fans a teaser of what they could be in for when he returns to England next year.

The South African sides showed their potential power, with two of the three sides getting off to a winning start. The Sharks edged Harlequins 39-31 in sweltering conditions at Kings Park in Durban, a far cry from the cold snap affecting Europe. The Sharks have experienced a tumultuous couple of weeks, with the sacking of their coach Sean Everitt, but bolstered by the return of their Springbok contingent, including national captain Siya Kolisi, they flexed their significant muscles. It wasn’t all power, though; winger Makazole Npimpi’s second try came from an extraordinary reverse pass from scrum-half Jaden Hendrikse that completely wrong-footed the Quins’ defence. At 32-14 down with twenty minutes left, any other side would be considered dead and buried, but Quins have a penchant for comebacks. Aided by the hosts going down to thirteen men, Quins pulled the deficit back to one point, with Springbok wrecking-ball Andre Esterhuisen scoring two tries. However, with a minute left, full-back Boeta Chamberlain ran in a superb try from an expansive attack, denying Quins a losing bonus point. Elsewhere, the Bulls beat Lyon 42-36 in a similarly entertaining encounter, while the Stormers suffered a narrow loss in Clermont.

Many have pinpointed Saracens as England’s most likely contender, making their return to “Europe’s” top table after their salary cap indiscretions. They will need a vast improvement if their performance at the weekend was any indicator, narrowly defeating Edinburgh 30-26. Huge credit must go to Edinburgh, who produced a gutsy performance, causing Sarries particular problems at the breakdown, usually an area of formidable strength for the English side. Ultimately, though, Sarries showed a clinical edge, sealing a bonus point in the process.

Sale put their ring in the hat with an emphatic 39-0 win over Ulster, backing up their strong domestic form. Ulster, unlike Leinster, couldn’t shake off their travel woes, though huge credit must go to Sale, who produced a superb performance, never letting the visitors into the game, their defence especially ruthless. Exeter Chiefs put some indifferent recent form behind them with an excellent bonus point win in Castres, while Gloucester also got off to a winning start, producing a superb comeback to defeat Bordeaux 22-17 at Kingsholm, despite an outstanding performance from flanker Tom Willis for the visitors. A much-changed Leicester side rounded off the weekend by defeating a loaded Ospreys side in Swansea, despite the speculation surrounding their head coach Steve Borthwick and the England job. The game’s highlight was a superb individual try from Anthony Watson, a timely reminder of his class with the Six Nations on the horizon. 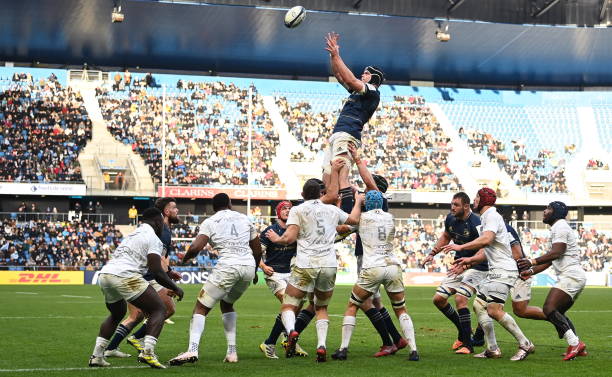