In the third quarter-final of the day, Italian champions AN Brescia set up a tasty European semi-final with FTC Telekom Budapest tomorrow at 20:30pm after beating Croatian heavyweights, JUG, in Serbia earlier this evening.

The game was incredibly tight throughout, with the game only being settled by an extra-player goal by Giacomo Cannella with a little over a minute from time.

The first quarter set the tone for the game, with Brescia scoring three, two from man-up situations from Jacopo Alesiani and captain Christian Presciutti, which was separated by a perimeter goal from Cannella. JUG, on the other hand, found their two goals from Loren Fatovic on the breakaway.

Fatovic then added another in the second quarter for JUG, making the score 3-3, however, Brescia restored their lead courtesy of Alesiani on the counter and Dimitrios Nikolaidis from a free-throw.  JUG fought back to make it 5-5 with goals from Benic and the Russian, Danil Merkulov, but Angelos Vlachapoulos gave Brescia a marginal 6-5 lead at the turnaround.

The third period was equally as close as the second, with three goals from each team. Whilst JUG prevented one of their former heroes, Maro Jokovic, from scoring, another former JUG player, Vincenzo Renzuto’s did manage to score – although his goal was cancelled out less than twenty seconds later by an excellent finish by Hrvoje Benic – his second of the game. Benic then scored again from an extra player goal – bringing JUG back on parity with the Italians. However, he was then sent out from centre-back making way for Vlachopoulos to grab his second of the game, giving the advantage back to the Italians.

In the final forty seconds of the quarter, JUG equalized once more from the man-up via Javi Garcia, before Renzuto scored just a mere three seconds from the end of the third, yet again giving Brescia the initiative going into the last quarter.

The pivotal goal came 22 seconds into the 4th quarter for Brescia, via a great goal from the pit from Djordje Lazic. With the score 8-10, the two-goal advantage gave Brescia the breathing space they desperately wanted, which JUG could not, ultimately, recover from.

Despite more goals for the Croats from both Fatovic and Papanastasiou, Alesiani got his third for the lions before Cannella’s goal sealed a very hard-fought victory.

Whilst quarter-final 3 was a tight affair, the same could not be said for the last game of the day. In the last quarter-final, Olympiacos Piraeus were humiliated by CNAB Zodiac Barceloneta.  In an evening to forget for Theodoros Vlachos, the Greek champions and winners of the Champions League only two years ago, were taken apart by Jesus Martin Lozano’s dominant Barceloneta side, who will play in the semi-final against Pro Recco at 18:00 on Friday –  who booked their place earlier today by defeating Waspo98 Hannover.

They could not have started any worse than they did this evening, in which they found themselves 6-0 down in the first quarter. Six different scorers netted for the side from Catalonia – Alvaro Granados Ortega, Alberta Munarriz, Fransicso Fernandez Mirranda,  Blai Mallarach Guell, Filipe Perrone and Milan Aleksic.

The second quarter was only marginally better for Olympiacos, who at least managed to get two goals in a row, from Georgios Dervisis and Konstantinos Genidounias to make it 6-2. But that only acted as a wake-up call for the Spaniards, who then reasserted their dominance by scoring six more unanswered goals, two from Aleksic, De Toro Dominguez, Granados, Guell and from Italian centre-forward Mike Bodegas.

At halftime,  with the score at 13-2, the game was effectively over, but Barceloneta did not let off. Further two goals from Guell as well as goals from Granados, Fernandez Mirranda, Bodegas and Marc Larumbe Gonfaus only added insult to injury.

In the last quarter, Olympiacos did at least win the quarter 4-3, with another goal from Dervisis, as well as goals from Konstantinos Kakaris, Genidounias and American international Hannes Daube. But that will not be a consolation for the Greeks, who were outclassed by Barceloneta on the night and this result will go down as one of the worst defeats in the clubs’ illustrious history. 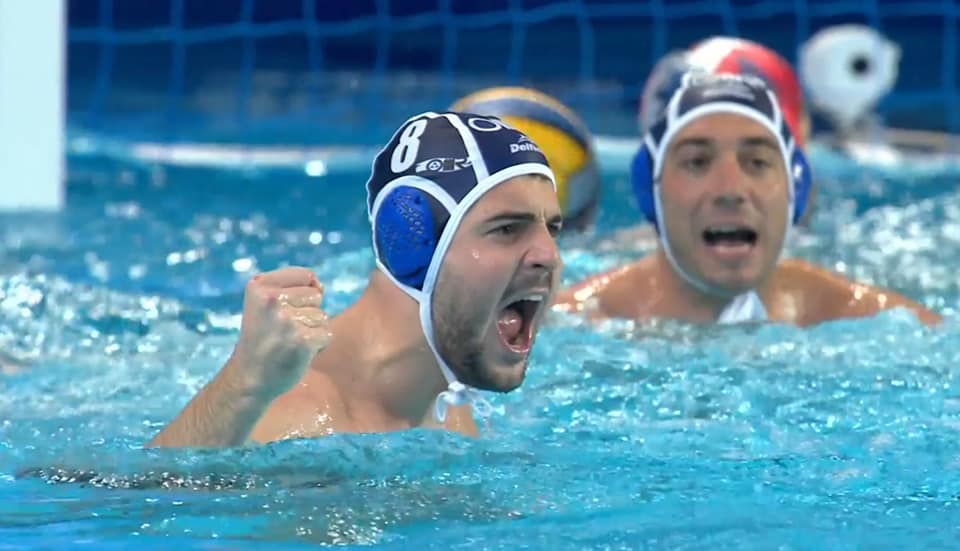