Liverpool defender Trent Alexander-Arnold has been ruled out of next week’s European Championships. The 22-year-old picked up thigh injury towards the end of last night’s 1-0 victory against Austria at the Riverside stadium, Alexander-Arnold limped off in a bad way after he felt something go in his left thigh while clearing the ball.

He immediately called for the England bench to substitute him off the field, the discomfort was clearly visible and it seemed to get worse as he continued to hobble off.

Speaking after last night’s game, Gareth Southgate was waiting on scan results before decided his next move.

“It’s not a good situation that he’s had to walk off in some discomfort,” said England manager Gareth Southgate.

“We’ll know more details in the next 24 to 48 hours. It looks like a thigh injury – in terms of the full extent, we don’t know yet.

Trent Alexander-Arnold To Miss Out

Since then, the 22-year-old underwent a medical examination to determine the full extent of the injury. The prognosis hasn’t gone well and it has now been confirmed that the Liverpool defender will miss Euro 2020.

After being sent off for scans, it was revealed that suffered a tear in his quadriceps.

“Trent Alexander-Arnold has been ruled out of UEFA EURO 2020,” a statement said.

“The Liverpool player sustained a thigh injury in the closing stages of Wednesday’s 1-0 win against Austria in Middlesbrough.

He will now return to Liverpool where he will undergo a rehabilitation program and is expected to be out for six/eight weeks he will hope to be fit for the start of Premier League campaign 2021/22.

“A scan on Thursday confirmed the 22-year-old will be unable to play in the forthcoming tournament so he has withdrawn from the England squad to return to his club for rehabilitation.

“Gareth Southgate will not confirm a replacement until after Sunday’s return to the Riverside Stadium for the warm-up fixture against Romania.

“Trent is obviously not a good situation, that he’s had to walk off the pitch and in some discomfort,” Southgate said after the win.

You have to feel for Trent

He was dropped from the squad back in March and it was widely speculated that he would miss out in the final cut.

However, he worked his way back into contention with stunning displays for Liverpool towards the end of the season. He then got selected for the final 26-man squad on the back of the performances on Tuesday, only to be ruled out of the tournament two days later – devastating!

Wishing you a speedy recovery! 💪

The Liverpool defender has earned 13 England caps and was expected to be one of England’s stars this summer.

While initially, this has come as a big blow for England – they more than have enough cover having picked four right-backs. The England manager Gareth Southgate will now have to decide on a replacement and this won’t be done until after Sunday’s game against Romania.

Gareth Southgate will not be short on cover as he still has Reece James, Kyle Walker and Kieran Trippier to play in this position.

Ben Godfrey, Jesse Lingard, Aaron Ramsdale, James Ward-Prowse, Ollie Watkins and Ben White were all left out of the final 26-man squad and they all have a chance of being included when Gareth Southgate announces his replacement on Monday.

The likely candidates Jesse Lingard and Ward-Prowse will be the front runners.

Who do you think will go? 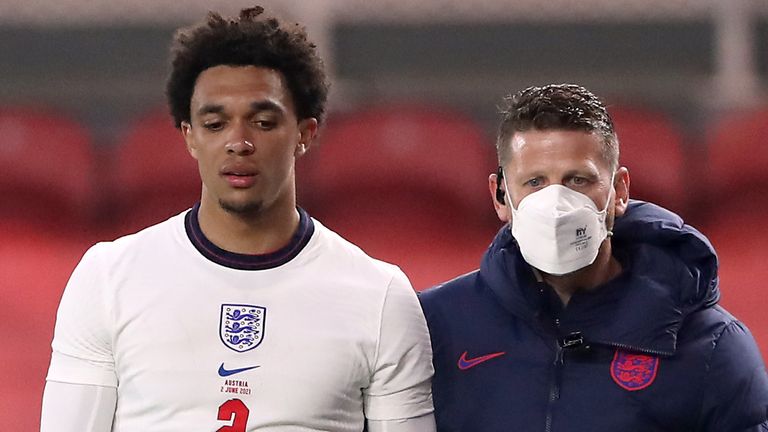