With strength in depth aplenty, Warren Gatland is spoiled for choice as his Lions side prepare for their first tour test on Saturday 24th. While some names practically pick themselves as nailed-on starters, the raw bulk of talent which Gatland must now whittle down into a cohesive unit has made his job as hard as it has ever been.

And oh boy are there some tough decisions to be made, to the extent to which the New Zealander might be wishing that said quality was a little more evenly distributed across the entirety of his 15 available positions. Scrum half, for example, does not scream strength in depth, a battle which will go down as a jostle between mercurial Ali Price or steady hand Conor Murray, whereas the back row is an embarrassment of riches; Tom Curry, Hamish Watson, Josh Navidi and Tadhg Beirne have all staked a claim for either a 6 or 7 shirt.

And then there’s the South Africans themselves. It’s easy to talk about the Boks’ physicality, but South Africa’s hugely effective ‘Blitz’ defence, their brutality at the breakdown, Faf de Klerk’s majestic kicking game and the dancing feet of Cheslin Kolbe are just some of the issues the Lions will have to cope with to stand any chance when the going gets tough.

The tourists are going to have to play with pace, as evidenced in the selection of nippy, ball-playing forwards like Jack Conan, Sam Simmonds and even Tadgh Beirne, but they’re also going to need to protect the ball from an ever-dangerous, constantly aggressive Boks side who can take possession practically anywhere, hence the likes of Chris Harris, Robbie Henshaw and Josh Adams in the backs. What the Lions need above all else is balance, a complementary style which can blend Gatland’s experience with attack coach Gregor Townsend’s firework brand of attacking flair, and adaptability, because there’s little guarantee of games unfolding as predicted or desired against such a strong opposition.

So how does Gatland go about navigating these headaches, and what is the ever-pragmatic coach likely to name as his starting XV for Saturday’s mammoth clash?

Above all else, Warren Gatland will want stability and experience from his front row when facing off against the Boks. It’s easy to be drawn to the glamorous names of Vunipola, George and Sinckler (especially if you’re English), but in Jones, Owen and Furlong, the Lions have an immensely steady and experienced platform on which to build, especially from the scrum. Neither of the three may be the most exciting players to watch, but when you talk about getting the basics right, you cannot go wrong with a trio of players sharing 166 national team caps between them.

If things start to go south, expect the likes of George and Sinckler to come off the bench looking to make a destructive impact, but don’t be too shocked if you see stand-out loosehead Rory Sutherland bag himself a spot in and around the squad. Everyone in the front row has seen decent game time, so no selection combination would surprise me.

If we’re talking about outside runners, hooker Luke Cowan-Dickie’s could make a contribution either starting or from the bench following a sublime tour showing so far.

We can sit and posit all day about the strengths of Iain Henderson, Johnny Hill and Adam Beard, but we all know where this is headed. Mighty Maro Itoje will be paired with Wales’ other patron Saint Alun Wyn Jones, and that’s the end of it. Warren Gatland loves the Welshman so much, he probably has posters of him on his bedroom wall and a set of XL AWJ pyjamas.

I love Courtney Lawes, but expect him to be seen carrying the water bottles before he’s starting at Lock for the Lions. Lawes’ versatility, however, could prove useful if Gatland needs a physically mobile 6 to support Beirne from the bench.

Itoje and AWJ to start, Beard to be the option from the bench.

Arguably, The Big One. How can you drop anyone from this astonishing back row? We’ve heard a 6-7-8 combo of Beirne, Curry and Faletau suggested, as well as some calling for Curry and Watson to occupy either side of the same scrum. Considering Gatland has chosen a back row of ball-playing, pacey rugby players, it’s likely that Beirne will get the nod for his excellent all-round abilities and surprisingly nippy playing style.

Watson has been majestic both for Scotland and for the Lions, offering a huge amount at the breakdown and with ball in hand, but Tom Curry’s performance against SA ‘A’s might just, JUST, have nudged him ahead for selection. On the other hand, Hamish Watson has been one of the world’s best 7’s recently, and has a mullet that could part seas. Majestic. Still, I’m going for Curry because he’s an absolute tornado of a player, and because his versatility will allow Gatland to reshuffle if he chooses a tactical shift.

Meanwhile at 8, I wouldn’t bet against Taulupe Faletau to start. Gatland knows what he can do and, fitness permitting, I’d back him against the quietly excellent Jack Conan and the mercurial Sam Simmonds, although Simmonds’ hands-on playing style might give him the edge. Whoever plays, expect them to spend time stationed in wide channels on set plays to stretch the game as part of the fabled 1-3-2-2 attack structure.

We can talk all day about the impressive tour campaign which Ali Price has had against the weaker regional sides, and indeed how an apparently ‘fading’ Conor Murray struggled when the Lions faced off against South Africa ‘A’s, but in tight, structured, physical test rugby, Gatland might prefer stability and control to zip and pizzazz, from his 9 at least. If he opts for a pacier, high-tempo start, Price could be the man to set the tone.

As for Gareth Davies, the lack of chatter around the Welshman seems to tell its own story; a decent player, but a bit of a placeholder for the tourists.

Murray to start and Price to inject the energy from the bench, or else Price to set a tempo and Murray on to see out the win.

A few years back, this shirt was Owen Farrell’s by right.

Yet something’s gone slightly awry with Wigan’s favourite square-headed son, a dip in form for the Red Roses which has opened the door for the likes of Finn Russell, Dan Biggar and even Marcus Smith.

While Farrell is often accused of slowing play down and recently making needless errors, Dan Biggar can be an immensely calculating operator when he needs to be, especially off an exceptional boot, while Finn Russell’s maverick approach is like handling dynamite which can decimate defences but often blow up in your face.

Marcus Smith to start? Considering how impressive he was against the Stormers, we can allow ourselves to dream of an appearance, albeit from the bench. Gatland has made a big enough statement in flying him out, and isn’t adverse to throwing in a few selection hand grenades (See Jamie George in 2017 for a prime Warren curveball).

Anyway, my bet? Dan Biggar. Just for the backchat.

We could sit here for days discussing the available permutations to be borne out of the combination of Farrell, Harris, Daly, Aki and Henshaw, but I won’t bore you with every possible outcome.

Suffice to say, Gatland will want balance, he’ll want grit, and he’ll want stability to match the pace at which he’s likely to want to play. As such, he’ll likely play it relatively safe in the middle; Aki could be chosen to draw men in to create space outside, especially if Gatland plays up to the classic model of ‘Warrenball’ by having big buggers smash through the middle, but I can’t see beyond a more pragmatic partnership of defensive rock Chris Harris and Ireland’s solid all-rounder Robbie Henshaw, both of whom play at a decent tempo while offering defensive ballast at the breakdown.

If Gatland is feeling adventurous and / or thinks the game needs some added spice, do not bet against Elliot Daly getting some serious minutes if things open up. He might not be a 15 and he occasionally tackles like a frightened T-Rex, but give Daly room to be creative and he is as good as anyone in that squad. Gatland didn’t pick him for a holiday.

Again, some huge calls are to be made out wide.

Watson is perhaps the most talented of the four and probably boasts the best all-round game. Van der Merwe is an astonishing physical freak, Louis Rees-Zammit is so fast he nearly breaks time, while Josh Adams has racked up eight tries on tour so far. Each man offers something the others don’t.

Pundits and fans alike seem to be gravitating towards a Watson/Adams combo, eschewing the shiny new toys of Zammit and van der Merwe for the two seasoned, more proven pros. And you know what? I agree. Watson is a complete player and Adams’ pick-and-go abilities around the try line will complement Gatland’s desired style of play. Being good under the high ball is imperative, which also works in Watson and Adams’ favour.

Keep in mind, too, that the likes of Elliot Daly and Liam Williams are capable wingmen, and that Watson can also operate at 15, as we shall now see…

Having touted Watson to start wide, let’s consider Liam Williams, an exceptional athlete and seasoned pro who thrives under the high ball and will never shirk his defensive duties. A very tempting choice for a team that will spend time under the aerial cosh, especially when De Klerk, Le Roux and Steyn bring their best kicking boots.

Then there’s Stuart Hogg, possibly the best full-back in the world right now (I said possibly!) whose Tour options have been a little limited so far given his credentials. Massive boot, born warrior, talented like you can’t comprehend, but will he bring the stability and defensive nous that Gatland so prizes in Williams?

Watson, meanwhile, is a very decent 15, often turning out at full-back for Bath, but having him on the wing allows the Lions to pick one of Williams or Hogg instead and makes the most sense when considering how to spread out the quality in the evenest way possible.

Yes, I know Elliot Daly has played full back as well, but having watched him there for England over the past few years, I think I’d be happier seeing the Saracens man at tighthead prop than anywhere near a high ball. Expect him to come on if there’s a 55m penalty to be taken, though. 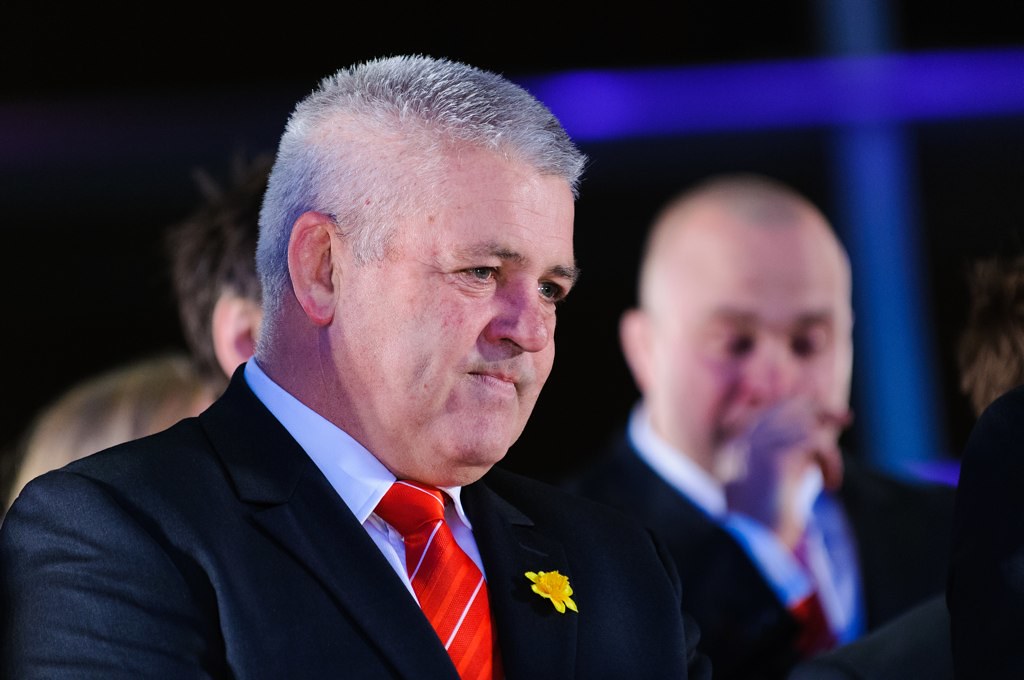