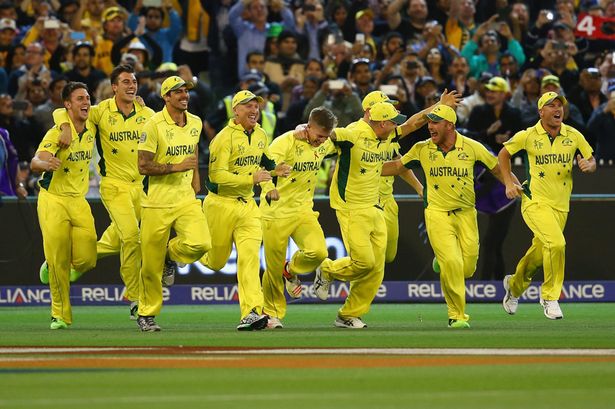 Australia clinched their 5th world cup title yesterday, after cruising to an emphatic 7 wicket win against New Zealand at the MCG.

Being no strangers to the condition and stress of playing in a world cup final, Australia dominated the game with their pacers applying pressure on the Kiwi batsmen, before reducing them to a minimal total of 183/10 in 45 overs.

Despite losing their openers, Aussies sailed to victory as Clarke scored 74 from 72 balls, leading his side from the front. He was assisted well by Smith, who scored 56* and hit a boundary in the 34th over to ensure the victory for Australia.

In this article, we shall look at the important segments of the game that laid the foundation to the 5th world cup glory for Australia as well as an overview of their world cup win for the first time on home soil.

Three strikes, you are out!
For the Kiwis to win, McCullum had to shine with the bat. However, Starc had other plans for him. He bowled three killer deliveries to McCullum, the last one being a yorker which blew off the stumps.

The dismissal unsettled the batting line-up of New Zealand since their power hitter had gone off for a duck.

Australia capitalized on the opportunity as Maxwell bowled Guptill and Johnson dismissed Williamson. The Kiwis were 39/3 at that stage, from 12.2 overs.

Faulkner strikes in the power play
New Zealand recovered from the initial mess as Taylor and Elliot scored 111 in the 4th wicket. They were aiming to accelerate the run rate once the power play begun.

But Faulkner had reserved his best bowling display for the finals. He dismissed Taylor(40) from the first delivery of the batting power play after an excellent catch from Haddin.

A ball later, he bowled the danger-man Corey Anderson. The momentum totally shifted towards the Aussies from then onwards.

Starc bowled Ronchi in the next over and from 150/3, the Kiwis were down to 151/6. Faulkner’s over changed the course of the game and the Aussies battled their way into the contest again, after the 4th wicket partnership was starting to build momentum for the Kiwis!

Australian pacers finish the job
Johnson bowled Vettori in the 41st over, taking the 7th wicket of the Kiwis. Elliot scored 83 from 82 balls, courtesy to seven boundaries and a six before Faulkner got him caught behind the stumps to Haddin. His dismissal was followed by Johnson picking up Henry’s wicket in the 45th over and Southee’s run out after a superb throw from Maxwell.

New Zealand were all out scoring only 183. The pacers had peaked on the grand occasion, sharing 8 wickets between them! Faulkner and Johnson took 3 each and Starc picked up 2 wickets. The Kiwis could not stand a chance against their aggressive bowling. Once again, the Australian pacers rose up to the occasion, easing the task for their fellow batsmen.

Warner, Smith and Clarke build the innings
After Finch’s dismissal in the second over, things were starting to spice up a bit. However, Warner and Smith scored 61 in the second wicket , steering Australia out of danger. When Warner was out, Clarke came out to bat for the final time in a ODI for Australia!

The skipper showed his class and determination and saw through the initial stage before smacking 74 runs from 72 balls, courtesy to 10 fours and a six.

His 112 run partnership with Smith ensured the victory for Aussies. Smith scored an unbeaten 56 and after Clarke’s dismissal, hit the winning runs for Australia!

Faulkner was the man of the match for his wonderful bowling(36/3) that enabled Australia to kill any chances the Kiwis had of recovery. His variation in bowling helped Australia throughout the tournament during the death overs and power plays. He recovered from injury during the world cup and  ended the tournament with 10 wickets. His performance proved why the management were so concerned with his recovery before the start of the tournament.

Mitchell Starc was the player of the tournament as he became the joint top wicket-taker with 22 wickets. In a tournament dominated by batsmen his economy rate of 3.50 and average of 10.18 speaks volumes of his contribution with the ball for Australia.

Steve Smith was the top run scorer for Australia, scoring 402 in 8 games. His consistency was the key to Australia’s dominance in batting. Smith picked up five consecutive 50s and proved why he is ready to be the future ODI captain for Australia.

But they were not the only stand-out performers for the Kangaroos. Johnson picked up 15 wickets in 8 games and rose to the occasion in the semifinal and final. Maxwell was superb in all three departments for his side!

Watto regained his form; the batsmen got runs on the board and the bowlers defended the totals when required!

Even the substitutes(Marsh, Cummins, Bailey) had outstanding performances when they were called up. Overall, the sheer quality and the number of match-winners in the team enabled Clarke and co. to lift the world cup.

New Zealand on the other hand, were invincible throughout the tournament under McCullum’s leadership! They ran into a formidable Aussie side, who knew how to win big games. They were unlucky to finish as runner-ups, being the second best team on the day that mattered most! Guptill was the top batsman with most runs and Boult was the joint top wicket-taker.

Clarke lifted the trophy in front of a record MCG crowd for the 5th time for Australia, the best way to retire as the ODI captain! As he remarked, it was also a tribute to their fallen warrior, their 16th man, Philip Hughes.

The world cup ended with Australia emerging as the champions after 49 games. They have now won the trophy from five continents. This young side has a lot of untapped potential. The future looks bright, if not brighter, for Australia cricket!