Denny Hamlin held off a last lap surge including a bump from behind coming out of the final turn from Brad Keselowski to win Sunday’s STP 500 at Martinsville Speedway.

Hamlin restarted fifth on the restart on Lap 467 of 500 and quickly moved into the lead with new tires on Lap 474. Equally as impressive was Hamlin’s work holding off Keselowski in the final laps.

Keselowski rammed into Hamlin’s bumper with a hard hit coming out of Turn 4 on the final lap that caused Hamlin’s car to wiggle, but he managed to hold on for the win.

With the win, Hamlin has punched his ticket in this season’s championship Chase.

“We just weren’t going to be denied today,” Hamlin said. “Hat’s off to Brad. He had an option and he took the latter (not to wreck Hamlin). I thank him for that.”

“We finished on a strong note, just not as quite as strong as we’d have liked to,” Keselowski said. “All in all, a real solid day and a fun day, just one spot short.

“I did everything I could other than wreck him. I hit him pretty good a couple times.

“He did a good job and chose not to wreck, which I give him credit for. I really don’t know what more I could have done, other than drove through him, but I feel pretty good about what I did do today.”

Thirteen drivers exchanged the lead 31 times. Sixteen cautions for 112 laps slowed the race. Among those swept up into the many accidents were Dale Earnhardt Jr. and Chase Elliott, each of whom sustained significant damage in separate incidents.

Shortly after fixing a broken shifter that hurt his progress throughout the race, Earnhardt slammed into the 27 of Paul Menard when several drivers spun in front of him.

Elliott, who was making his Sprint Cup debut; he was entangled with several cars early and had to go to the garage for repairs.

Kyle Larson was forced to miss the race due to further tests at a Charlotte hospital related to his fainting Saturday morning during a fan autograph session. Regan Smith replaced Larson and finished 16th. 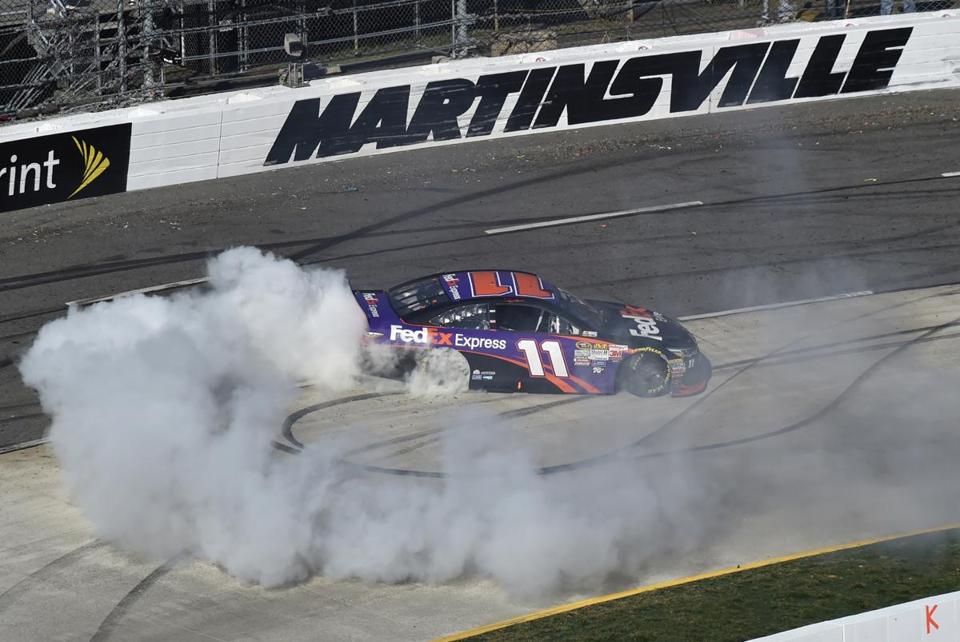