Just the one game took place in midweek in the Premier League, and it came from The Etihad on Wednesday evening as league leaders Manchester City looked to bounce back from their first defeat in almost three months at the weekend by trying to see off a Southampton side who were looking to build on their win at Sheffield United at the weekend, which ended a poor run of one point out of twenty-seven prior to that…

Looking at the scoreline you would have thought this was a straightforward win for the hosts against a Saints side who had suffered another ordeal in Manchester, well it was far from that if truth be told as Southampton certainly played their part in what was a very entertaining encounter at The Etihad.  The Saints began well but fell behind in the 14th minute when Kevin de Bruyne fired in off the bar after Alex McCarthy had saved, but this did not deter the visitors who won a penalty eleven minutes later after Jannik Vestergaard was fouled by Aymeric Laporte, and James Ward-Prowse fired the spot-kick straight down the middle and Southampton were level.

The Saints continued to do well and almost went in front, although they nearly shot themselves in the foot after McCarthy allowed the ball to squeeze away from his foot, and Phil Foden stole in and was brought down by the keeper, but for some bizarre reason neither the referee or VAR deemed it a penalty, but the Saints did then shoot themselves in the foot when a shocker of a pass across the field by Che Adams was intercepted by Riyad Mahrez, and the City winger cut inside and beat McCarthy into the bottom corner. And then just before half time City grabbed a third when Mahrez fired an effort off the post and Ilkay Gundogan reacted quickest to smash home the loose ball.

Would the Saints crumble, well initially it looked like they might, City dominated the opening exchanges of the second period and made it four when the brilliant Mahrez bided his time before shooting past McCarthy, but The Saints then went straight up the other end and netted second themselves as Adams smashed home after his reacted quickest to a loose ball had broken to him, but then de Bruyne then made it 5-2 to City when he ran onto the ball and fired past McCarthy for his second of the game.

Both teams continued to attack in the final half-hour of the contest, but no further goals came, which was surprising, but City do get back to winning ways, and their last winning run started against The Saints, so could they go on another long winning spell, you wouldn’t rule it out would you, whilst for Southampton they can take many positives from this one as they certainly caused an unsteady City backline plenty of issues, but they were made to pay for some errors that you just cannot make against one of the best teams in European football right now.

Let’s see what that does to the table… 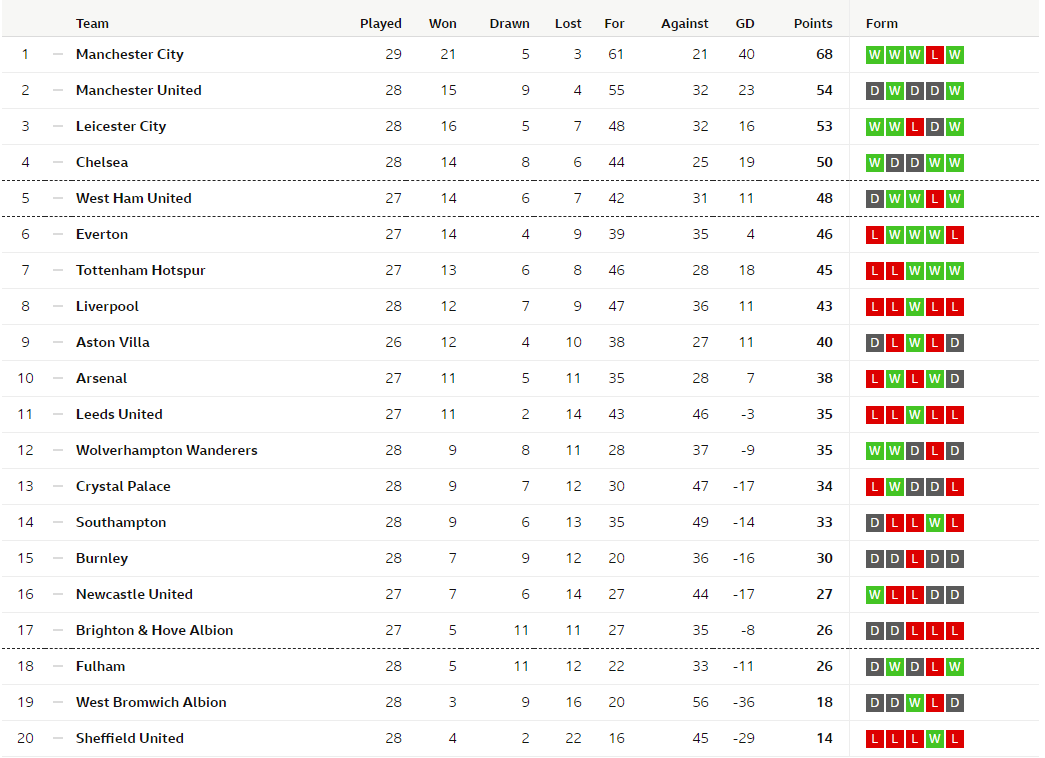 City now has a fourteen-point lead at the top and are edging ever closer to another league title, whilst for Southampton they remain fourteenth and seven points above the drop zone although if they continue to play like they did this evening, they will be fine.

A look ahead now to the weekend fixtures, which get under on Friday evening…

Newcastle United v Aston Villa (8pm) (The Magpies know if they can grab victory here, they will go four points clear of the drop zone and ease their relegation fears for now, whilst Villa themselves need points to try and keep their European dream alive)

Leeds United v Chelsea (12.30pm) (Leeds are trying to avoid three straight losses in the league but welcome a Chelsea side to Elland Road in good form under Thomas Tuchel and could go third on goal difference with a win)

Crystal Palace v West Bromwich Albion (3pm) (Palace know that if they can see off West Brom here they will be just one win from that magical forty-point mark which would all but seal their Premier League status for another season, whilst West Brom know a win would take them five points from safety)

Everton v Burnley (5.30pm) (The Toffees need to bounce back after their loss at Chelsea on Monday evening and keep their top four hopes alive, Burnley know a win could take them further away from the drop zone and take themselves closer to safety)

Fulham v Manchester City (8pm) (If Fulham avoid defeat against the league leaders at The Cottage then they will climb out of the bottom three, whilst victory for City would see them go seventeen points clear at the top and see the title come ever closer for Pep’s men)

Southampton v Brighton & Hove Albion (12pm) (A Saints win could see them put more daylight between themselves and the bottom three, and just four points from that forty-point mark, Brighton could be in the bottom three by the time this game comes around so a win would certainly help)

Leicester City v Sheffield United (2pm) (The Foxes could start this game in fourth but know a win would take them all the way up to second for the timebeing, The Blades need wins desperately and if they managed to get one here could be nine points from safety although with only nine games to go)

Arsenal v Tottenham Hotspur (4.30pm) (North London bragging rights are on offer at The Emirates, Spurs won the corresponding fixture at the Tottenham Hotspur Stadium earlier in the campaign and if they can do the double over their rivals, they could pull to two points off the top four, however Arsenal will not want that to happen and if they can pull off a win, they would keep their outside chances of Europe alive)

Manchester United v West Ham United (7.15pm) (Man United could be down to third by the time this game comes around but know a win takes them back second once again, however they welcome a Hammers side who are showing no fear this season so will make it a very tough contest at Old Trafford, and if West Ham do win, they could go back into the top four if results go their way this weekend)

Wolverhampton Wanderers v Liverpool (8pm) (If Wolves can pick up three points against a Liverpool side who are struggling for confidence lately, they will be two points off that forty-point mark, and only five points behind a Liverpool side who desperately need to pick up points if they harbour dreams of grabbing a champion’s league spot for next season) 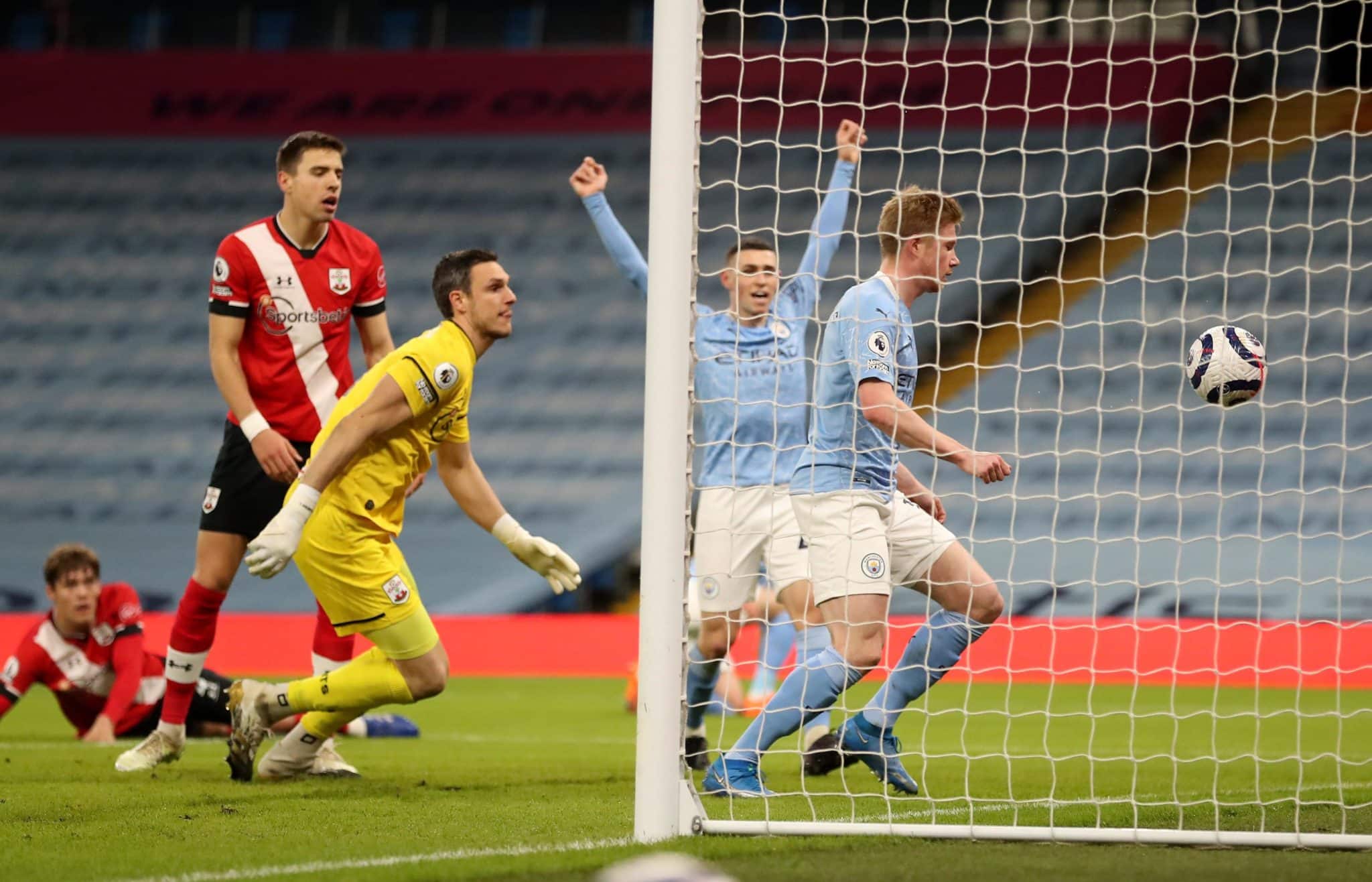