A couple of Premier League encounters to catch up on, which took place on Monday and Tuesday evening, both in the North West from the magnificent cities of Liverpool and Manchester, let’s see how they went…

In a game of very few chances, it was The Toffees who netted early on to continue their chances of a top-four finish well on course as they defeated a Saints side who have now lost eight of their last nine and will be nervously looking over their shoulders below.  The only goal of the contest came in the ninth minute when a Gylfi Sigurdsson pass released Richarlison who rounded keeper Fraser Forster to net in what was one of only two shots on target in the whole contest.

Neither side could really find their rhythm though, Michael Keane did see a hosts effort ruled out for offside, whilst Dom Calvert Lewin, normally known for his damage done in opposing penalty areas, did well to head clear a visitor’s free-kick from James Ward-Prowse, although the best chances for Southampton came near the end after Moussa Djenepo fired wide, and then Jordan Pickford had to save from Jannik Vestergaard as the hosts managed to hold onto their one goal advantage to go level on points with their city rivals across Stanley Park with a game in hand.

It’s now a very worrying run for the visitors though, they have only picked up one point from a possible twenty-seven lately, and they are only seven points above Fulham who occupy the final relegation place in 18th, so if they and the likes of Burnley, Brighton and Newcastle all start picking up points, The Saints could be in a whole heap of trouble if this slide continues.

It’s only a matter of time before City are crowned Champions surely? This latest win saw them go fifteen points clear at the top after they ended up seeing off Wolves fairly comfortably in the end after a brief scare, and it meant twenty-one wins on the bounce too, utterly absurd. City totally dominated the ball in the first period as expected but only had an early Leander Dendonker own goal to show for it at the break, this after some lovely play on the right from Riyad Mahrez, controlling a Crossfield ball brilliantly before firing across goal, and the only positive for the visitors in the first period as it was only 1-0.

City continued to dominate after the break and forced Rui Patricio into two decent stops, but just past the hour mark and with Wolves first touch inside the City area they levelled when Conor Coady headed home a free-kick, and you thought for a very small moment that the visitors might go on and stun their opponents and maybe become the first side to stop City winning for three months or so.  City though after weathering a Wolves spell began to step it up though and saw Sterling go close twice, but with just under fifteen minutes remaining City did retake the lead as a ball into the six-yard box by Kyle Walker fell loose for Gabriel Jesus who smashed the ball at goal and in off Dendonker.

This opening the floodgates for City as they eased away from their opponents, netting a third when sloppy play from Wolves trying to play out from the back ended with the ball falling into the path of Mahrez who swept a lovely finish into the bottom corner, and then Jesus netted a second for himself and a fourth for City in stoppage time when he pounced on a rebound, and although it was originally given offside VAR deemed it was just on, and the home side continue their march towards the title, whilst Wolves although much improved second half was blown away by their opponents in the final part of the contest and brings their five-match undefeated run to an end. 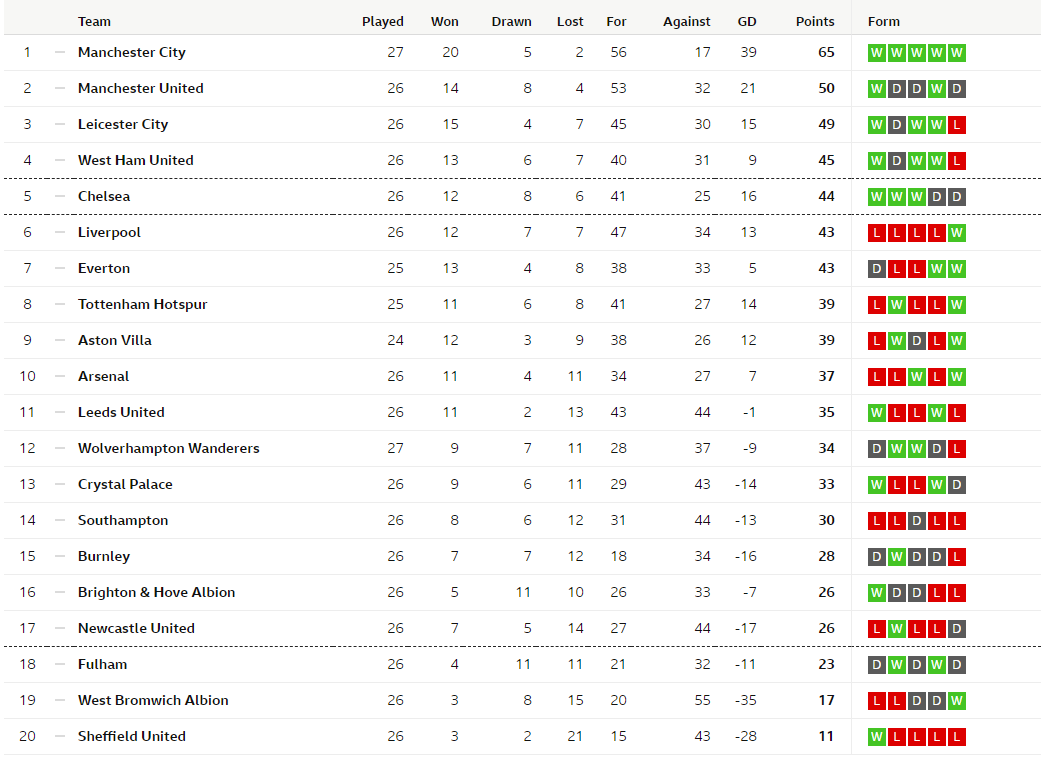 City is now FIFTEEN points clear and looks nailed on to win the title, so it looks like the rest are playing for second place and the top four, whilst Wolves remain in 12th although should have enough to not get dragged into a relegation fight. And Everton are now just two points off a champions league place with a game in hand too, so it’s in their hands currently (technically anyway!!!) whilst The Saints poor run continues and is not out of the relegation question just yet.

There are six more games this midweek across Wednesday and Thursday, let’s have a look ahead to those…

Burnley v Leicester City (6pm) (The hosts need to get Sunday’s heavy defeat at Spurs out of their system as they welcome a Leicester side who also will be smarting somewhat after a disappointing loss at home to Arsenal at the weekend, both sides need the points for differing reasons too)

Crystal Palace v Manchester United (8.15pm) (Palace have had quite a good week leading up to this game, four points from six against Brighton and Fulham, although they had a lot of defending to do in those that’s for sure and probably should have lost both. They will certainly have to do a lot of defending no doubt against a United side who are effectively playing for the runners up spot, and a win here could see them increase the gap to third-placed Leicester if the Foxes slipped up at Burnley earlier in the evening)

Fulham v Tottenham Hotspur (6pm) (This proves to be an exciting London derby at The Cottage, Fulham could climb out of the bottom three at the expense of Newcastle on goal difference with victory here, but Spurs will be full of confidence after their comfortable win over Burnley at the weekend and could go just three points off the champions league spots if they do win)

West Bromwich Albion v Everton (6pm) (If The Toffees can pick up their second win in a matter of days then they will climb above West Ham, Chelsea and Liverpool into fourth spot ahead of the latter two’s clash at Anfield later on that evening, whilst if West Brom harbour any hopes of survival then they need to win and if they do they will reduce the gap to safety to six points)

Liverpool v Chelsea (8.15pm) (A win for either will take them into the fourth spot, The Reds finally ended their four-match losing streak with a victory at Bramall Lane at the weekend, but Chelsea will prove a tougher nut to crack and are yet to lose under Thomas Tuchel and will look to try and inflict the host’s fifth straight loss at home with a victory here) 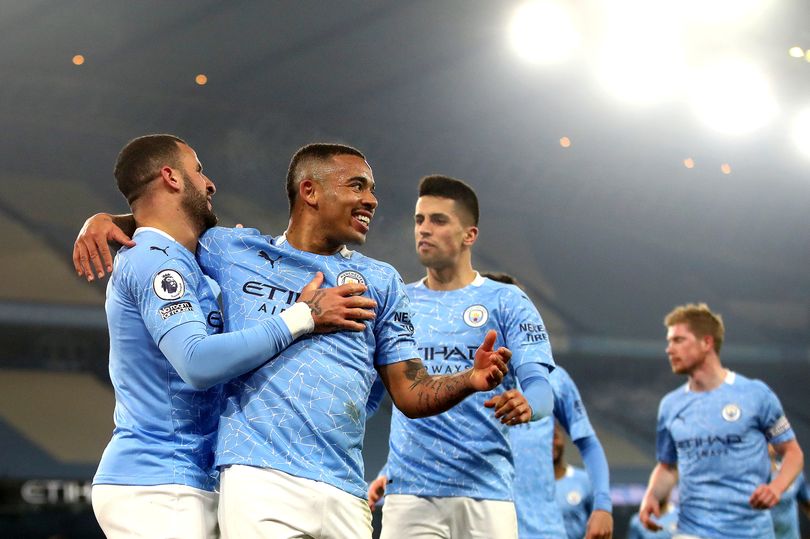