Six more Premier League encounters to catch up on, which took place on Wednesday and Thursday evening, let’s see how they went…

After these two had suffered painful losses at the weekend, a point apiece in this one at Turf Moor was probably satisfying for both, although Leicester would have been the happier no doubt after they fielded a side without several first-choice players due to injury, so without the likes of Harvey Barnes and James Maddison for example, they managed to gain what could be a big point come the end of the season.

One of those drafted in, Kelechi Iheanacho, gave his side an attacking edge along with James Vardy, and he managed to cancel out an early Matej Vydra strike from the hosts with a wonderful volley midway through the first half, Vydra had punished The Foxes in just the fourth minute after a mistake from Hamza Choudhury allowed him to beat a man and fire home.

Both sides had chances to win it too, Foxes keeper Kasper Schmeichel save superbly from James Tarkowski and Chris Wood, and Ashley Westwood volleyed an effort against the Leicester post whilst Youri Tielemans struck the home sides post with a shot from the edge of the box, however, it is a useful point for both, for Burnley it takes them six points above the drop zone, whilst for Leicester, they now have a six-point gap to fifth.

Derby County’s record lowest points total in a Premier League season of 11 remains intact after The Blades moved onto 14 for the season as they managed to survive the final half-hour with ten men to defeat a Villa side who are chasing European football this season, with the telling moment coming on the half-hour mark when David McGoldrick was picked out by George Baldock to convert from inside the six-yard box after a lovely move.

The closest Villa came to netting was just before The Blades went down to ten men after Ollie Watkins has headed against the post, but shortly after this United defender Phil Jagielka was sent off for a foul on Anwar El Ghazi, this after referee Robert Jones had viewed the incident on the VAR monitor and changed the yellow, he had initially handed out to a red. The Blades though held on for what could be a huge win.

United still have twelve points to make up though with just eleven games remaining, but if they can string some results together then who knows, whilst for Villa, it’s a hammer blow to their European chances although they do remain in striking distance of the top six still, they are certainly missing the guile of Jack Grealish who remains out through injury and could not break down a stubborn Blades side as a result.

Awful, abysmal, woeful, just some of the words to describe this contest in a nutshell, as the sides played out a drab goalless draw in the misty conditions in South London. Ole Gunner Solskjaer said afterwards his side need to find their spark again, well he could not be more right after his side played out their third straight goalless draw to trail leaders Manchester City, who they play at The Etihad at the weekend, by FOURTEEN points.

READ:  Brentford vs Arsenal: The Premier League is Back

His side dominated possession but struggled to create many clear-cut chances, Nemanja Matic forced a decent save out of Vincente Guaita, whilst Marcus Rashford placed an effort wide when he should have scored, whilst Palace did not manage a shot on target until early on in the second period when Jordan Ayew fired an effort from an angle straight at Dean Henderson, who was in for David de Gea after the first-choice keeper was left out due to personal reasons.

And the hosts so nearly pinched all three points late on when Patrick van Aanholt found himself in on goal in the left-hand side of the box, but Henderson came and made himself big to deny the Palace full-back, meaning it ended goallessly and a point apiece. It is a useful point for Palace who continues to edge themselves ever closer to another season in the Premier League.

Spurs managed to make it back-to-back wins for the first time since November, but they had to fight hard for this one after Fulham came on strong after the break, and they were lucky to hold on if truth be told as the hosts suffered a rather poor VAR decision which saw what they thought was a deserved leveller chalked off.

With the visitors clinging on, Fulham saw Josh Maja’s effort find the bottom corner of Hugo Lloris net, but VAR adjudged that Mario Lemina had handled the ball as it ricocheted into the path of Maja before he fired home, but his hand was by his side and pinned to his body, and yes the ball hit his hand but it was no way it was handball, as said before who knows what handball is anymore, but Fulham had right to feel aggrieved and who knows how important it could prove to be. Fulham had also seen a Joachim Anderson effort tipped onto the bar, and Lloris also denied Tosin Adarabioyo as the hosts searched for a leveller after the break.

This was after Spurs had put in a decent first-half showing and with Harry Kane, Son Heung-min, Gareth Bale and Dele Alli all getting starts, they looked dangerous and caused the hosts a lot of issues in the opening forty-five minutes, and what proved to be the only goal of the game came in the 19th minute as Alli fed the ball wide to Son who then crossed into the box for Alli to flick across goal and see Adarabioyo inadvertently touch the ball into the far corner, and in the end, it proved enough for the visitors who are still in the picture for the top four. Fulham, well they stay three points from safety and will feel upset that they did not get something from this one.

The Toffees moved above their Merseyside rivals and ended the evening in the fifth spot after they edged a hard-fought contest at The Hawthorns against a West Brom side who are running out of games to try and get themselves out of the bottom three. The only goal of the game came twenty minutes after the break and saw sub Gylfi Sigurdsson make an instant impact, as just 43 seconds after coming on, his cross was converted by Richarlison, and it proved enough for Carlo Ancelotti’s men to briefly go forth before Chelsea then pinched it off them with their win at Anfield later in the evening.

West Brom had been the better side in the first half but found England keeper Jordan Pickford in good form as he saved from Mbaye Diagne, and the hosts thought they had snatched a 93rd-minute leveller when Diagne controlled a pass and struck home, but he was denied by the offside flag and sadly for him and the Baggies VAR confirmed the on-field decision, meaning they ended this contest with nothing, which leaves them still nine points from safety with just eleven games to go.

Five consecutive home defeats for Liverpool, yes FIVE, and this is the first time it’s ever happened to The Reds in their entire history, and it was Thomas Tuchel’s Chelsea who was the latest side to roll into Anfield and pick up all three points after Burnley, Brighton, Man City and Everton had done so previously to that, who would have thought this possible a few months ago, but it’s a bit more of a blip now for the Merseysiders who fall to seventh and four points off a champions league spot.

The only goal of the game came three minutes before half time when the brilliant Mason Mount cut inside and fired a lovely effort past Alisson into the bottom corner, and in fact, The Blues could easily have had another before this when Timo Werner got in and managed to eventually find the net, only for VAR to disallow the goal for offside, which raised a few eyebrows, however, it was not to cost them in the end as Mount’s goal proved enough for victory.

Chelsea may feel a bit fortunate not to have given away a second-half penalty though when Roberto Firmino’s cross clearly struck the hand of N’Golo Kante, but VAR decided it wasn’t a penalty, which seems weird after the handball decision that went against Fulham in one of the earlier games in the evening, confusing rule it is and needs clearing up you feel, but it is the way things are going for the hosts right now as they look up at Chelsea who now occupies the fourth spot.

READ:  Who Will Be Given The Helmet From Helmut 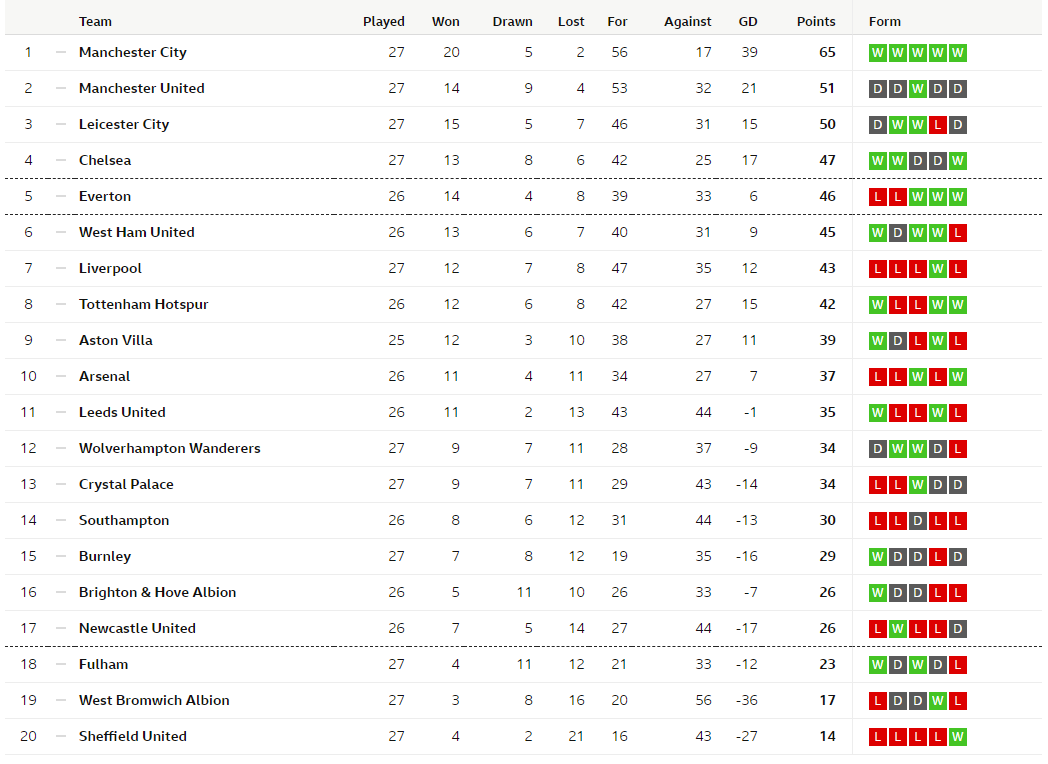 Both Leicester and Man United dropped points yet again, meaning City’s lead is fourteen points at the top, whilst the race for the fourth spot in the division is going to be interesting with Chelsea now in that final champions league place currently. Down at the bottom, the Blades managed to grab a win but still remain twelve points from safety, whilst Fulham and West Brom both lost meaning the ones above breathe a sigh of relief for now.

Let’s look ahead to the weekend fixtures, which begin on Saturday…

Burnley v Arsenal (12.30 pm) (Burnley can go nine clear of the bottom three with victory, Gunners could climb into ninth and keep their outside chances of Europe going)

Sheffield United v Southampton (3 pm) (Blades can climb off the bottom of the table on goal difference with a win, Saints need a win desperately to end a rotten run of form)

West Bromwich Albion v Newcastle United (12 pm) (Baggies could reduce the gap to Newcastle and safety to six with a win, Toon know a win will take them six points above the drop zone)

Liverpool v Fulham (2 pm) (Surely Liverpool cannot lose at home for the six successive matches? Fulham will surely ask them questions and know that they simply must win this one especially if results go against them in games before this one, hosts need points just as much to keep themselves in the top-four hunt)

Manchester City v Manchester United (4.30 pm) (A win for City could send them as much as seventeen points clear, a United win would reduce the gap to eleven, but really even if the latter happens all it does is help United in their bid for runners up as the title is surely gone now)

Tottenham Hotspur v Crystal Palace (7.15 pm) (Can Sours make it three wins in a row against a Palace side who have picked up five points in their last three, a win for the hosts could take them to level with the top six and two of the top four, Palace would all but secure Premier League football for next season if they win)

Chelsea v Everton (6 pm) (Big game in the battle for the top four, with winners ending the weekend in that fourth spot)

West Ham United v Leeds United (8 pm) (Hammers will look to continue their decent form and keep themselves right in the hunt for top four with a win, Leeds pushing for a top ten finish and will aid these ambitions if they net a result here) 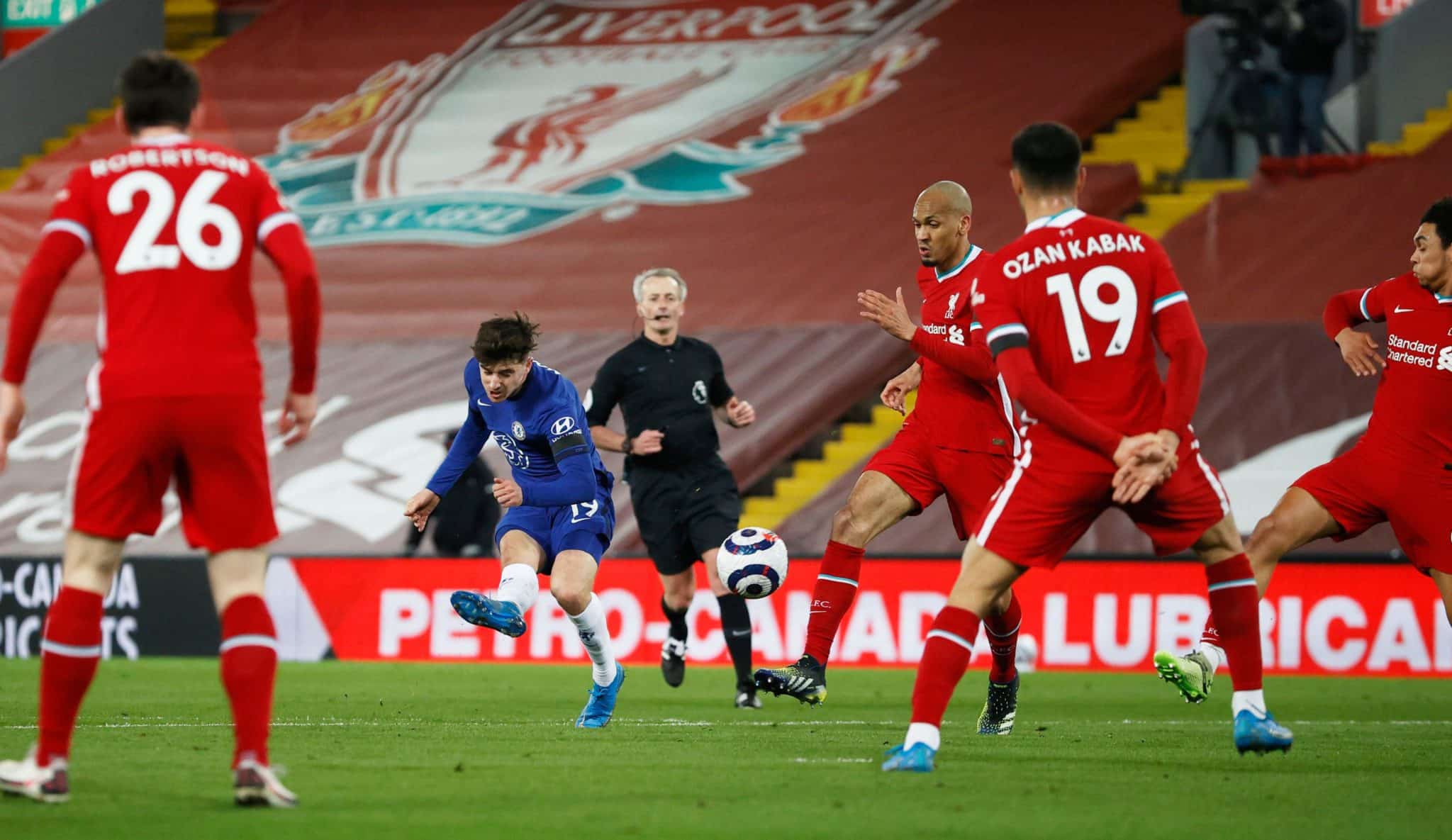