Maxwell’s 102 made the difference in the end as Australia defeated Sri Lanka by 64 runs!

Glenn Maxwell’s 102 from just 53 balls helped Australia post a total of 376-9 against Sri Lanka today at SCG. Sri Lanka managed to score 312 in reply, before being all out. The 64 run victory helped Australia to climb up the pool A standings as they remain at no. 2.

Australia won the toss and elected to bat first. However, they lost both their openers in 8.4 overs, with only 41 runs on the scoreboard.Prasanna got rid of Warner(9) after Sangakkara took a catch before Finch, who scored 24 from 24 balls, hitting three boundaries was dismissed by Malinga, courtesy to Prasanna’s catch at extra-cover. Australia were looking vulnerable losing their openers but the 3rd wicket partnership of 134 runs by Smith and Clarke helped them claw back into the match.

Clarke was steady with the bat, scoring 68 runs from 68 balls and hit six boundaries before being bowled by Malinga. Smith(72) was dismissed in the next over by Dilshan. 177-4 after 32.3 overs and it looked as though Sri Lanka were in the driving seat of the match. But they were proved wrong as Maxwell joined Watson in the crease and smashed his way to 102 from just 53 balls! Their 4th wicket partnership of 160 at 11.70 an over helped Australia go past 300!

Maxwell hit 10 fours and four sixes before Perera removed him in the 47th over after Malinga took the catch at mid-on. Faulkner(0) was run out in the same over. Watson regained his form with the bat, scoring 67 from 41 balls, courtesy to 7 fours and 2 sixes before Perera dismissed him. Haddin scored a quick-fire 25 from 9 balls, hitting four boundaries and a six before being dismissed by Mathews. His innings helped Australia go beyond 350!

Sri Lanka also picked up the wicket of Starc in the last over as he was run out, thus bringing an end to Australia’s innings at 376-9. Both Malinga and Perera picked up two wickets each for their team.

Chasing 376, Thirimanne(1) was dismissed in the second over by Johnson. Dilshan and Sangakkara posted 130 runs in the second wicket and were determined to succeed with the run chase. At 135, Faulkner made the breakthrough dismissing Dilshan, who scored 60 from 62 balls hitting 8 fours! Jayawardene(19) was run out by Clarke at 188.

However, the ever dependable Sangakkara scored his third consecutive ton in the tournament, hitting 11 fours and was imposing a huge threat to the Aussie bowlers before being dismissed by Faulkner! 201-4 after 34 overs and Chandimal joined Mathews at the crease!

Their 80 run partnership still kept the hopes alive for the Lankans. Chandimal picked up 52 from just 24 balls, hitting 8 fours and 2 sixes, before succumbing to a cramp and walking off in the 42nd over. Watson dismissed Mathews(35) and made the task difficult for the Lankans as they were 283-5 after 41.3 overs! And it all went downhill for Sri Lanka from then onwards.

Johnson picked up Perera’s wicket after a catch from Doherty from the following over. Prasanna scored 9 runs helping Sri Lanka go beyond 300 before Starc bowled him in the 45th over. Faulkner was brought into the attack again and he removed Tharanga, Sri Lanka’s last recognized batsman in the 46th over. In the next over, Starc dismissed Senanayeke as Doherty took the catch at mid-off, bringing an end to Sri Lanka’s innings at 312! Faulkner picked up the three important wickets for his team giving away 48 runs!

During the presentation ceremony, Clarke praised his batsmen, especially Maxwell for their batting and hailed Starc for his effort in the death overs with the new ball. Lankan skipper Mathews remarked that conceding 200 runs in the last 16 overs was way too much for his team! He lauded Sangakkara for his consistency with the bat. Man of the match Maxwell said that he was relieved to pick up his maiden ODI ton and said his teammates would be physically and mentally refreshed for their upcoming match.

The 64 run victory also helped Australia to qualify for the quarter finals. They will face Scotland on March 14 at Hobart for the last group match. A win on that day will guarantee them the second place in pool A! 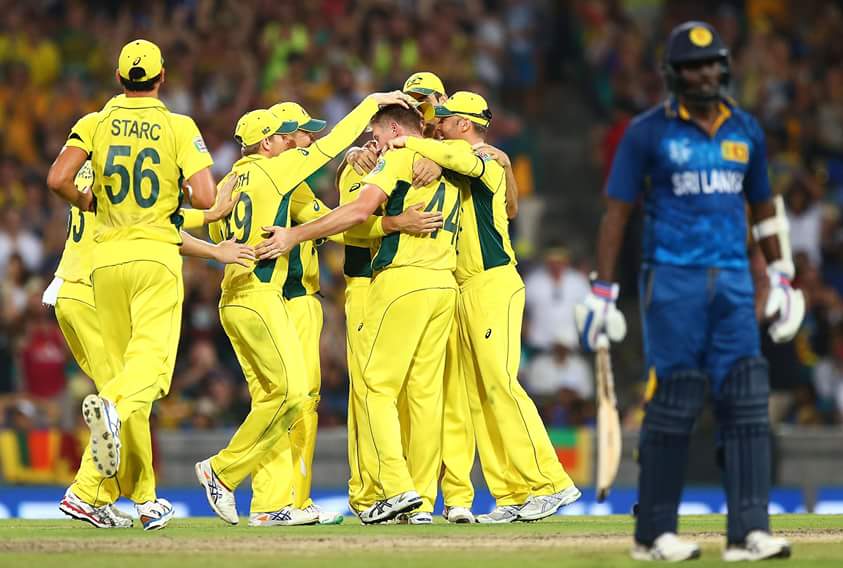