The Miami Heat beat the Utah Jazz for the second time in a week, surviving a 4th quarter onslaught to win 111-105 in Salt Lake City.

Miami was without Jimmy Butler, out with a right ankle sprain, and Markieff Morris, but dug out a strong team performance with all 5 starters scoring double figures.

Utah, on the other hand, struggled to get their offence flowing, being held under 25 points through each of the first 3 quarters. The Jazz managed to turn it around in the 4th, outscoring the Heat 36-16 but the deficit proved insurmountable.

PJ Tucker opened the scoring, floating the ball in off a Duncan Robinson assist, having collected a defensive rebound following Utah’s opening possession.

Miami got out to an early 23-7 lead in the first quarter off the back of 3 Robinson triples and a 15-0 run.

Jordan Clarkson announced his entrance into the game with a blistering 5-minute 28-second end to the quarter, sinking 3 threes of his own and laying up a buzzer-beater to end the first, closing the gap to 27-24.

Over the final 5:28 of the 1st quarter…Jordan Clarkson drops 14 points 🥵

Robinson continued his strong first quarter into the second, helping the Heat extend their lead as the bench units came on.

Rudy Gobert and Bam Adebayo exchanged alley-oops in the second but Miami held Utah at arm’s length for the majority of the quarter, rounding out the half up 58-48 despite Clarkson’s 19 first-half points.

“They both get two points for it, but whose was prettier?”

You make the call 🧐 pic.twitter.com/oizWle1PlM

Miami’s lead continued to build in the third as the Heat continued to keep the ball moving to create shots for Kyle Lowry and Tyler Herro who became more involved alongside Adebayo and Robinson.

Kyle getting it done on both ends of the floor 💪 pic.twitter.com/GDxH0LmQoz

With Miami playing a near-perfect quarter, they carried a 95-69 lead into the fourth.

As Clarkson had the hot hand for Utah, Miami switched their double teams to him, allowing the Jazz’s supporting cast more opportunities with Mitchell having more of the ball.

Bojan Bogdanović caught fire in the fourth, sinking 5 threes and getting the crowd off their feet to set up a nervy ending.

Mitchell, without the double teams, began finding his rhythm, scoring 9 points with 4 rebounds, 3 assists and 2 steals in the fourth quarter as the Jazz pulled within 4 points at the end of the game.

👏 here for the hustle 👏#TakeNote pic.twitter.com/WbQ49b8IQ3

Miami had possession with 14.5 seconds on the clock, forcing Utah to foul, with Herro making the free throws to put the Heat up 111-105.

Clarkson threw up a hopeful three-pointer with 9.2 on the clock but with the miss, Utah’s chances of a comeback were over.

No Butler no problem

It was an impressive road win for Miami without their leader Jimmy Butler, who has missed the past 2 games with an ankle sprain.

Miami moved the ball well through the first 3 quarters, creating plenty of good scoring opportunities and making shots to give the Heat a big lead.

The absence of Butler saw Tyler Herro moved into the starting lineup and the 21-year-old guard continued his fantastic start to the season, scoring 27 points with 8 rebounds.

Miami’s bench scoring was inevitably down with Herro in the starting lineup, but Max Strus, Gabe Vincent and Dewayne Dedmon all helped with good defensive plays, whilst the Heat’s starters each stepped up to contribute.

Kyle Lowry scored 21 points on 57% shooting, Duncan Robinson made 6 threes in a 22-point outing whilst PJ Tucker ended with a double-double with 13 points and 11 boards.

With the arrival of Kyle Lowry, Miami’s playmaking has increasingly transitioned away from Bam Adebayo this season, with the big man’s assists down from 5.4 last season, to 2.7 through the first 13 games.

However, with Jimmy Butler out, Bam saw more of the ball, allowing him to facilitate from the top of the key more, as he did last season, and enabling him to collect a season-high 7 assists.

What a pass by Bam and finish by Duncan pic.twitter.com/pZm0fomK1g

Bam’s assists have dropped partly as a result of league-wide poor shooting so far this season, but Miami will be relieved to see him dishing the ball around again and racking up the assists.

The win and Adebayo’s performance shows Miami can cope without Butler on the floor, giving Spoelstra more versatility with his rotations for when their leader returns.

Miami’s offence was a joy to watch through the first 3 quarters, scoring 95 points. But their defence was equally impressive, holding Utah to just 69 in that period.

The Heat came out and clamped up the Jazz during the opening 6 minutes, limiting them to just 5 points. Jordan Clarkson sparked Utah into life, but Miami quickly adapted, throwing double teams on both he and Donovan Mitchell throughout the game and forcing the ball out of their hands.

Erik Spoelstra also switched them into a zone at times, confusing Utah’s offence as they did not know how Miami were going to set up each possession.

What was most impressive from the Heat, was the way their players put their bodies on the line, forcing numerous charging fouls against the Jazz.

However, for all the great defence in the first 3 quarters, the game nearly slipped away in a chaotic fourth which saw Utah score 36 points.

Without Jimmy Butler or even Markieff Morris, on the floor, Miami struggled to stop the bleeding as Utah made shot after shot. Tyler Herro and Duncan Robinson are the usual targets for opposition teams, and having both the floor in the fourth quarter against the Jazz gave them a route back into the game.

The lack of composure at the end of the game will concern Erik Spoelstra, but his team’s defence through the first 3 quarters was good enough to help them hang on.

This win gets Miami back on track, taking them to 8-5, having lost 4 of their 5 previous games after a strong start to the season.

Miami now sits 5th in the Eastern Conference ahead of a trip to face OKC on Monday night.

Meanwhile, Saturday night’s game sees Utah fall to 8-5, leaving them sat 6th in the West as they prepare to host the Philidelphia 76ers. 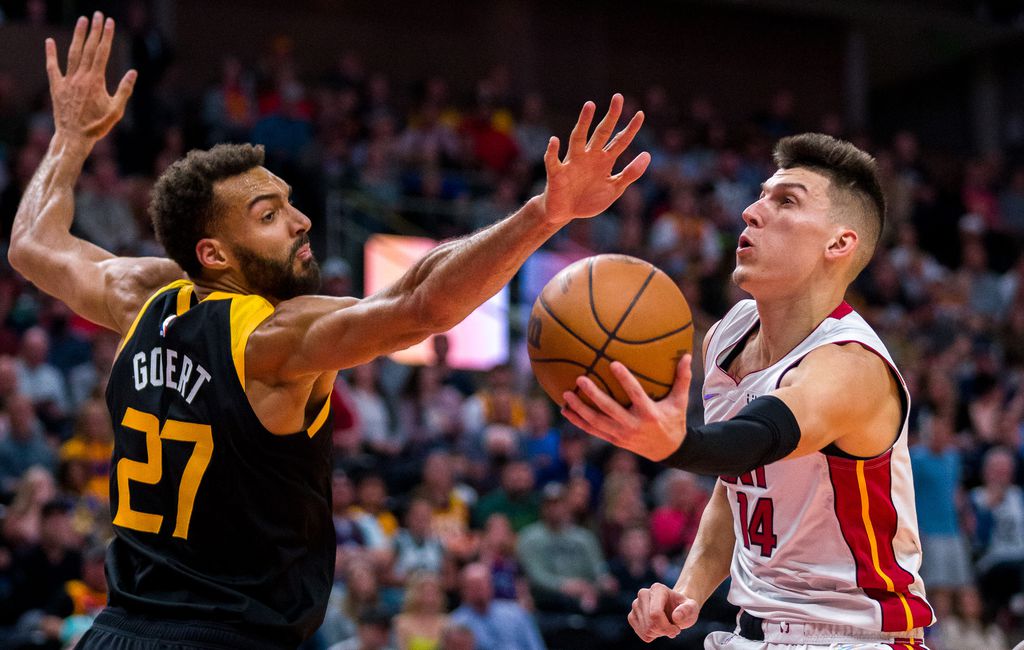