In his first NFL start, Mike White delivered one of the most improbable passing performances in NFL history, heard his name chanted by the home crowd and rallied the New York Jets to a stunning 34-31 upset on Sunday over the Cincinnati Bengals.

Replacing injured rookie Zach Wilson, the No. 2 overall draft pick, Mike White passed for three touchdowns and 405 yards — the Jets’ first 400-yard passing day since 2000 and the most by a first-time starter since Cam Newton’s 422 yards for the Carolina Panthers in 2011. It was always thought that White would start the game, despite the Jets trading for Joe Flacco.

At the end of one of the most surprising afternoons, White’s coach Robert Saleh might have sparked a future quarterback controversy. Asked if White could be the Jets’ long-term answer, Saleh left it open-ended. He didn’t commit to Wilson, who is expected to miss at least one more game with a sprained knee.

“It goes back to that whole theory, the difference between player A and player Z is opportunity and reps,” Saleh continued. “That’s what this league is. That’s professional sports. That’s why [guys] come out of nowhere; someone gets an opportunity. What Mike does with his opportunity, he’s got the world in front of him. He’s just got to take advantage of it.”

White will start Thursday night on the road against the Indianapolis Colts, Saleh said. If he plays well, the Jets (2-5) will have a huge decision to make.

White, 26, is a former Dallas Cowboys draft pick who has been cut five times in his NFL career. Despite a lack of experience he rallied the Jets from an 11-point deficit in the fourth quarter. They entered the game as an 11.5-point underdog, making this their third-largest upset win over the past 40 seasons.

Throwing all short passes, Mike White completed 37 of 45 attempts. He showed plenty of poise, rebounding from two first-half interceptions and a neck injury that forced him to miss a few snaps.

White didn’t push the ball downfield. In fact, not one of his 45 attempts traveled more than 15 yards in the air. Despite this, he put up huge numbers, as running back Michael Carter (9 catches for 95 yards) and Crowder (8 for 84) made yards after the catch. Wilson’s 405 yards were the second most since 1950 by a first-time starter.

ALSO READ:  Gronkowski Forced Out With Back Spasms After Only 5 Poor Plays

From the outset, White, who completed his first 11 passes, energized the Jets’ previously moribund offense. By the second half, the crowd was chanting, “Mike White! Mike White!” He couldn’t believe his ears.

“At first, I had to kind of listen again,” he said. “I was like, ‘Are they chanting my name?’ That was pretty cool.”

The capper came on the two-point play after Kroft’s touchdown. The Jets ran their version of the “Philly Special,” with Mike White giving the ball to wide receiver Jamison Crowder and then catching a pass from Crowder in the end zone.

“The things that went through my mind in those two seconds were, ‘Don’t drop it, don’t drop it,'” White said with a smile.

“He’s a savage, he’s a dog, he’s an animal,” Johnson said of White, who won the backup job in training camp after spending time last season on the Jets’ practice squad.

“Y’all are surprised by what he did, but I’m not,” Carter said of White, who missed a few plays with a sore neck.

Saleh said White was “awesome” and “fantastic.” He declined to say whether this will allow the Jets to be more patient with Wilson’s injury, adding that it will be day-to-day. White said he’s not even thinking about his future role.

“Personally, I did a good job of not making it more than it is,” White said. “What helped a lot, too, was the coaches’ faith in me and the team’s faith in me. There wasn’t a flinch.”

If White continues to perform as he did, then the question will arise, do the Jets keep two solid quarterbacks and rotate, or do they look for a potential trade partner in the offseason. 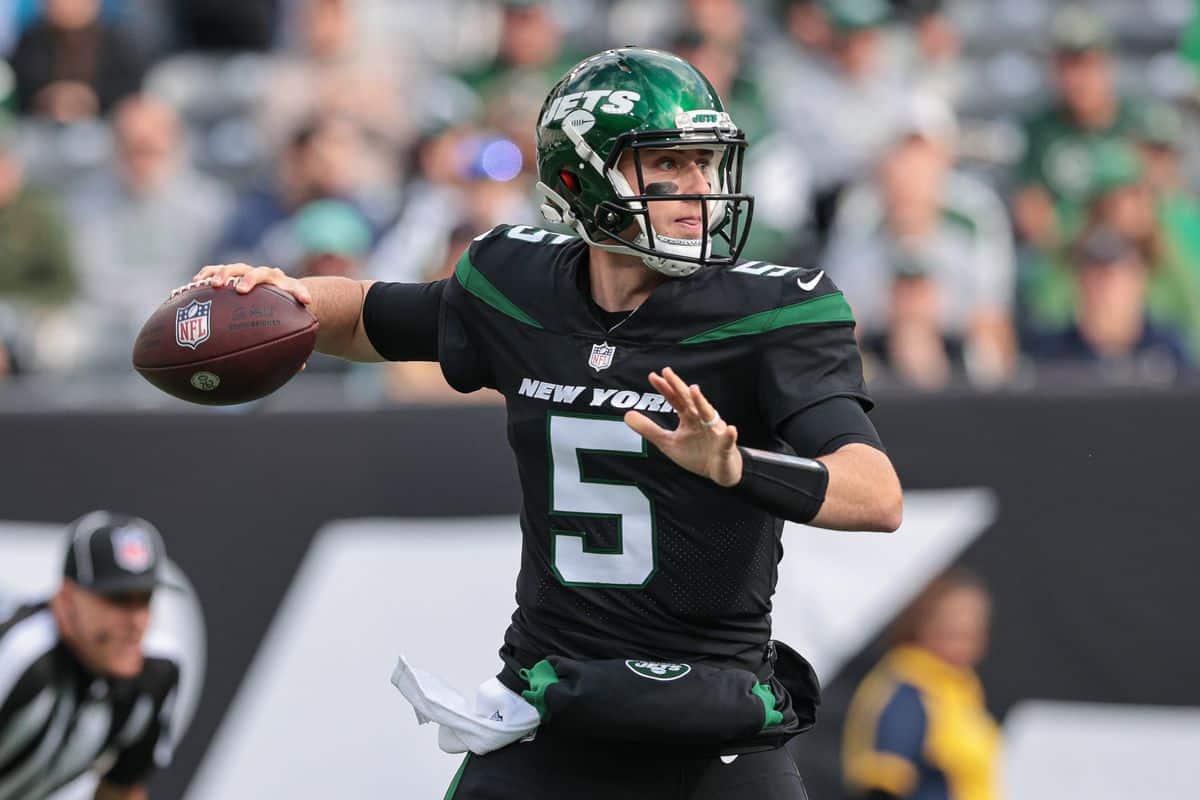